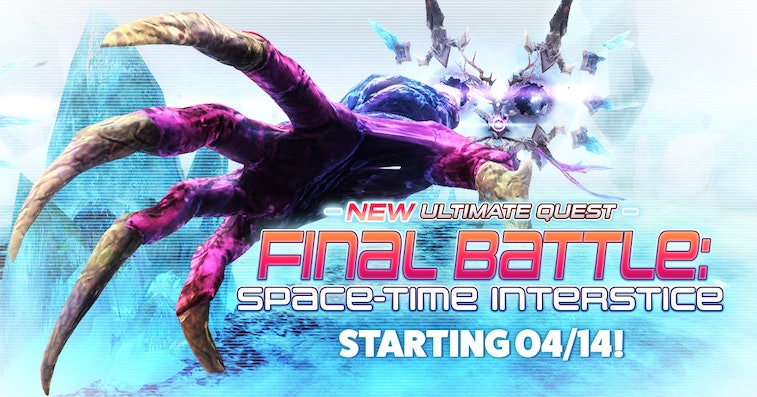 Sega’s Phantasy Star Online 2 has a new “Ultimate Quest” available to players today, and the promotional materials are drawing the wrong sort of attention from the internet. According to the announcement, “only senior-ranking Arks (those above level 90 on both Main and Sub – Class) should attempt this mission, as it is to be done solo” since the challenge “is too unstable to allow for greater numbers of operatives.”

But at least successful players can earn rewards ranging from “SG Tickets to Weapon Transmutation Aux Passes to S Class Augments,” alongside “Class EX-Cubes and DARKSTONE DEIMOS,” as well as potentially “POWERSTONE GRAEAE,” a new Title, and “a reward of one LUMINFRAGMENT EMEL!” So, um, we expect if you know what that means you’re suitably excited. But that’s not what’s got the internet’s collective tongue a-wagging and eyebrows a-lifting. Oh no, instead it’s the curious mixture of typographic and design choices that led to the banner you can see above and below. You may want to read it twice.

Oh... it’s called Final Battle — Final Battle: Space-Time Interstice. That... well, it’s still incomprehensible, but at least it isn’t as troubling as the original typeface-tight-kerning-combo makes it out to be. Styling it “FInaL” doesn’t help, either. And lest you think all of our minds are in the digital gutter: we present to you proof that we are far from the only people who thought the same, rectal-related misread. Granted, our proof stems primarily from Twitter, which is certainly an internet latrine in its own right, but still.

It isn’t all bad decisions over at Sega — It’s not all junior high joke material for Sega. Earlier this year, the company announced a massive shakeup separating into two divisions, “Amusement” and “Video,” prompting speculation that a major industry development is on the horizon.

After Microsoft’s recent acquisition of ZeniMax, many theorize the Xbox maker is coming to devour Sega next, which wouldn’t necessarily be a bad thing. With any luck, we’ll get that long-lost, weird-as-hell Simpsons game reboot society deserves. And Microsoft has always wanted to be big in Japan.