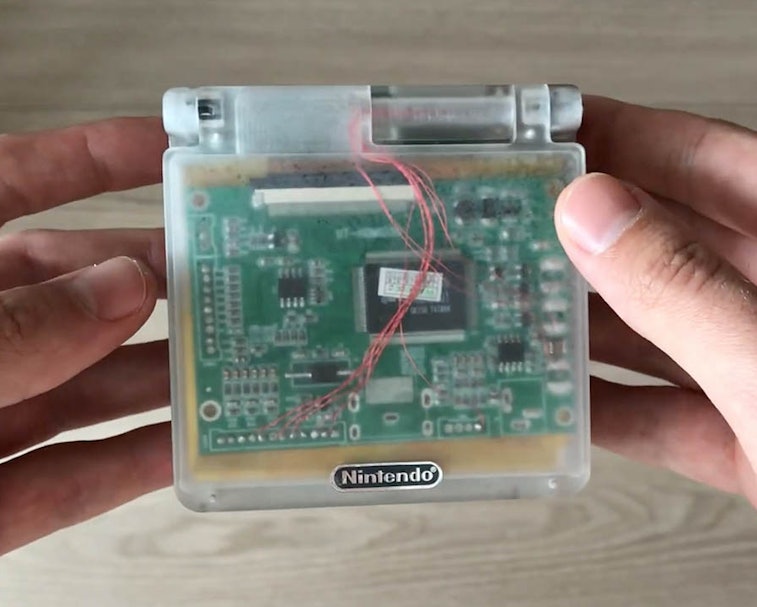 Modder StonedEdge has taken this now-classic design and turned it into an entirely new beast: the Wii SPii (h/t Retro Dodo). That’s what he’s calling his latest design, which squeezes an entire Wii console into the body of a clear-shelled Game Boy Advance SP.

Retro gaming devices with the ability to play Game Boy titles are a dime a dozen, these days. But a portable device capable of playing Wii games — that’s almost unheard of.

If there’s any bad news here, it’s that you can’t buy one of these masterpieces for yourself. StonedEdge put tons of work into his creation and solicited help from other modders, which is probably more than we could manage, frankly. We’re not modders, and we don’t know any. We’ll just have to admire from afar.

Custom everything — There’s a reason StonedEdge’s Wii SPii is so impressive: he put 10 months of dedicated work into creating it. Each and every mechanism has been created just for this project, from the sand-blasted acrylic body to the 3.5-inch VGA panel to the power management system.

StonedEdge’s mode includes a USB-C port (a luxury never afforded to either the Wii or the GBA SP) and an SD card for up to 256GB of memory. In terms of controller input, he’s installed a directional pad, two squatty analog joysticks, ABXY buttons, and four pressure-sensitive shoulder buttons. All housed in that beautiful translucent case.

In terms of operating software, StonedEdge is utilizing software from BitBuilder, a popular modding community. The software includes controller configurations and tons of compatibility back-end for portable Wii and GameCube titles.

Wii to go — At first glance the idea of a Wii / Game Boy Advance SP hybrid sounds almost sacrilegious, an unholy Frankenstein’s monster of a gaming console. But the Wii library is, for the most part, unplayable on portable consoles — now StonedEdge can play both Wii and GameCube hits on the go.

Such a marvel of a mod is no small undertaking, but the Wii SPii’s full specs can be found in StonedEdge’s post on the BitBuilt forum here, if you want to delve into a serious modding project. His full year-long planning and building process can be found on the forum as well.