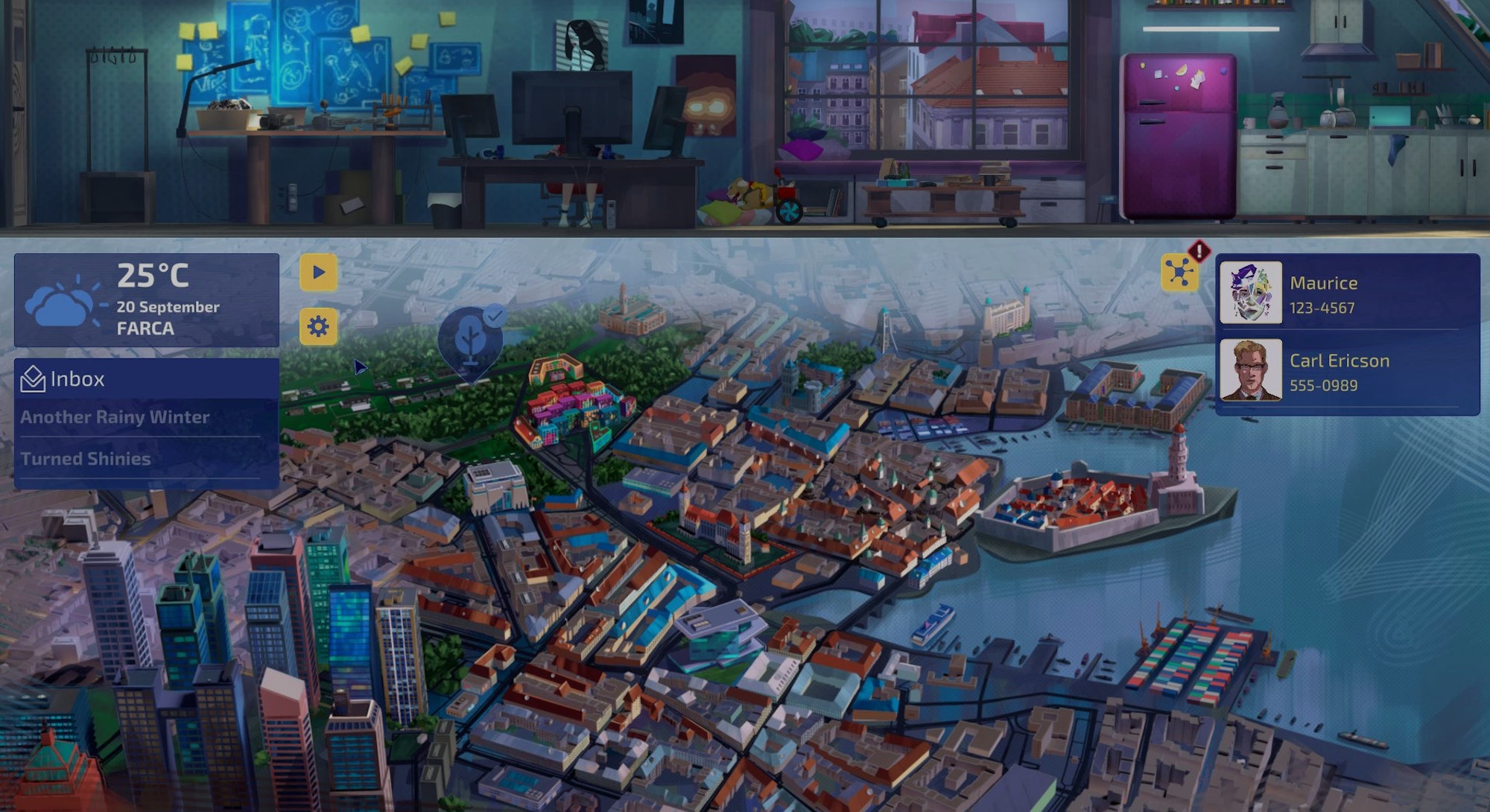 As the chapters unfold, and the full extent of Izy’s WFH situation becomes clearer, pandemic lockdown vibes are superseded by an uncomfortable familiarity with Izy’s hyper-surveilled city and the corporate factions that control it. Her physical world may be restricted to her apartment but, in the virtual sense, she comes and goes at will, using her hacking skills to investigate cases ranging from the criminal to the crazy.

The gameplay is essentially point-and-click puzzle-solving, all of it taking place via Izy’s desktop. The top half of the screen is a cut-away view of her apartment — her workspace and kitchen, with a large window overlooking a residential neighborhood. We see Izy mostly at work, sometimes getting herself a drink or snack from the kitchen or playing with her dog. The bottom half, only unlocked when Izy is at her desk, is a view of her desktop, the playable area.

The internet is Izy’s lifeline — both for clients to contact her and to carry out her investigations. With help from her (sometimes needy) AI assistant Maurice, she gathers information from online databases, including the darknet, and examines crime scenes remotely via surveillance cameras. By deploying drones and taking control of bots, she can break into safes, phones, tablets, and computers. She can access CCTV camera footage, monitor biometrics during phone calls, and even have Maurice perform remote autopsies and data decryption.

Most of Song of Farca is about puzzle-solving. All surveillance scenarios where Izy is sent location data, available as a clickable point on a map of Farca, require her to hack into the CCTV network to examine the area, be it a park, office, residence, movie set, illegal dog-fight arena, catacombs, and even a yacht. The locations get increasingly complex, in the sense that Izy must evade patrolling security people, workers, family members, and pets to get to her goal.

The internet is Izy’s lifeline.

When devices and locations are password-protected, the clues lie in some kind of cryptic note or hand-drawn illustration lying around. The passwords, all four-digit numeric codes, are mostly challenging enough to be fun — but a couple are ridiculously obscure.

The best puzzles, though, are those tinged with danger. At one point Izy must help clear the way for her client’s people to get past violent guards who will shoot on sight in a multi-storied office under siege. At another, Izy’s girlfriend and her companion are trapped in a building while a bloody protest rages around them, and she must lead them to safety. In all of these, she uses surveillance cameras and bots to set distractions and get enemies out of the way, sometimes even luring them into a room and locking them in. (Note to self: the only unhackable locks are the old-fashioned kinds.)

To close her cases (and, thus, get paid) Izy has to analyze the evidence, and put two and two together to draw logical conclusions. Then, she must use her deductions in dialogue with suspects and witnesses to make sense of it all.

But, of course, there is a caveat.

There are no wrong outcomes — in other words, you cannot fail at the game — but Izy’s choices have consequences. Be prepared for collateral damage, even to Izy’s personal life. As the 10 cases in the game coalesce into a single story, the outlines between good and evil, victim and criminal, and right and wrong blur.

Like any create-your-own-adventure story, there are some clunky bits. Izy’s decisions result in different outcomes, so you could theoretically replay the game with different choices. However, it would be a tad tedious, as the cases, their sequence, and the puzzles remain the same.

David Aramyan, founder of Wooden Monkeys, an indie developer based in Russia, described the game as follows: “Song of Farca is our vision of a near-future where humanity hasn’t achieved space travel or eternal life yet but is rushing headlong into a world dominated by technology and gadgets. A world where personal data can be obtained in two clicks and criminal groups can be destroyed using a device. Where digital bullying can easily push someone into crossing the line. Where all the powers of Big Brother are just another handy tool for experienced hackers.”

While the developers haven’t indicated precisely when this “near-future” is located, it’s safe to wager that it’s sooner rather than later. Song of Farca has been described as Black Mirror-esque, but it reminded me more of the sci-fi TV series Person of Interest, in which reclusive programmer Harold Finch had a sophisticated anti-terrorism AI that tapped into the network of CCTV cameras, mobile phones, and other devices to predict crimes before they took place. The sheer extent of their intrusions into the lives and personal devices of oblivious civilians (even if for their own good at times) was stupefying.

But whether or not Song of Farca accurately predicts how the next few decades will roll, we are already living in a similar dystopia, says Anushka Jain, who works on surveillance and transparency at the Internet Freedom Foundation, a digital liberties organization in India, a country already in a cybersecurity crisis. The Pegasus scandal has been at a steady boil here for weeks; plus, concerned stakeholders have been battling for years with an increasingly autocratic government for legislation related to personal data collection. Even though citizens are not actively surveilled, Jain says, the sheer amount of data accumulating in government databases has a huge potential for misuse.

“All the powers of Big Brother are just another handy tool for experienced hackers.”

The international freedom-of-information watchdog Reporters Sans Frontières (RSF) agrees. But even though the Izy Songs of our times aren’t hacking — well, maybe some are — into our home security systems via our smart cameras, it doesn’t mean it isn’t possible.

“The data being gathered about our lives are already massive, and only growing,” says Anja Kovacs, director of the Internet Democracy Project, which works towards realizing a feminist vision of a digital society. With Big Data’s collusion in data collection and the surveillance economy, and data being treated as a commodity to be bought and sold, she says, there could be hundreds, even thousands, of third parties with access to our personal data. Most of us are blissfully oblivious, but “even those of us who do try to limit how much we share are powerless… There is just no way to keep track of it all.”

In Song of Farca, Izy’s actions, albeit virtual, have real-world consequences, sometimes in terms of life, liberty, and death. The seriousness of this is deftly contrasted with the striking, almost retro-comic-book-style artwork of Izy’s home, the window through which we get a glimpse of the outdoors, and the animations of her life in lockdown. At one level, the game is an enjoyable mental romp. If so inclined, one could easily gloss over the similarities between the dysfunctional, fictional, Farca and our own reality. That said, to ignore the game’s unsentimental portrayal of how our data and our bodies intertwine is a whole different ask.