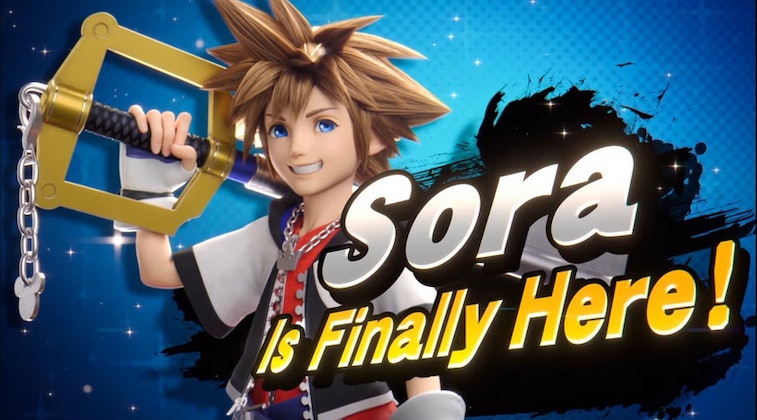 Today, during Nintendo’s final “Mr. Sakurai Presents” livestream, the series’ legendary director, Masahiro Sakurai, revealed that the final DLC character for Super Smash Bros. Ultimate will be Sora of the Kingdom Hearts franchise. Three years after the game’s announcement, this marks the completion of the game and its promised DLC.

Disney dreams — As the most popular character in the company’s fan vote, Sora will be included in the game’s Fighters Pass Vol. 2 as the title’s 82nd (and final) playable character. In the pack, he joins Min Min from Arms, Steve and Alex from Minecraft, Sephiroth from Final Fantasy VII, and Pyra and Mythra from Xenoblade Chronicles 2. Originally from Kingdom Hearts, a mash up franchise featuring the most beloved characters from Square Enix and Disney, Sora has been featured in every one of the series’ thirteen games. This marks Smash Bros.’ first original character from the franchise.

Double jump — Sora will feature multiple skins of his various looks from Kingdom Hearts history, such as his Valor form, Wisdom Form, Ultimate Form, and Timeless River appearance. His moves consist of attacks like Sonic Blade using his signature Keyblade and various spells such as Fiara, Thundaga, and Blizzaga. His final smash move will be called “Sealing the Keyhole.”

Plot — Sora will be available for download on October 18. In addition, the company also announced a new stage with new music themed around Kingdom Hearts and two extra Mii Fighter costumes inspired by the characters of Splatoon and Doom Slayer (Doom guy) of the Doom franchise.

Squid game.Nintendo
Kitty hat.Nintendo
He really runs on anything.Nintendo
Brothers.Nintendo
Looking tight.Nintendo
Take this!Nintendo
More like this
Steven Wright
12 hours ago
Chunk by chunk
Saudi Arabia buys 5% of Nintendo, because why not
Will Gendron
5.12.2022 12:15 AM
Indie love
Nintendo’s latest Indie World showcase paraded the small but mighty
Steven Wright
5.18.2022 2:41 PM
Super Portal 64
This N64 demake of Portal shouldn't work, but it does