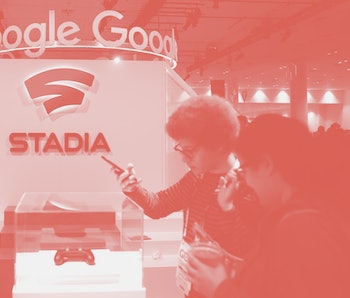 Google’s Stadia may not be making headlines like it used to, but the cloud streaming platform is still chugging along. Some might say it’s “alive and well.” In the face of steep competition from more traditional consoles and other streaming services, Google has added a new feature that might actually convert some free users to paid ones: A 30-minute trial of Stadia Pro exclusives.

Stadia’s latest exclusive, a multiplayer construction game called Hello Engineer, is the first to offer the 30-minute trial option, 9to5Google reports. The game is free to play with a $9.99/month Stadia Pro membership, and non-Pro players can buy it for $20.

Stadia has struggled to find footing in the gaming industry from the moment it launched. Giving players the option to try a game — even if just for half an hour — could be just the push Stadia needs to actually get gamers interested in the platform.

Full access — Jumping into the Hello Engineer trial is as easy as logging into Stadia and navigating to the game’s dedicated page. The trial option appears right under the buttons to buy the game or claim it for free with a Pro subscription, as YouTuber Gem shows here.

This isn’t some limited version of the game with random boundaries around what you can or cannot try; the trial affords players access to the entirety of Hello Engineer. A 30-minute timer begins counting down in the sidebar as soon as the game is launched. Players’ progress is saved, so they can jump right back in if they decide to buy the full game later.

Hello Engineer is the only game offering a free trial right now, but Google did confirm to The Verge that the option will be coming to other games in the next few weeks.

Hey, it’s worth a shot — Stadia has not been doing well. Some might say it’s bound to end up in the Google Graveyard sooner rather than later.

Stadia has already gone through quite a few identity crises since launching in 2020. Google had big dreams of its own in-house studio creating exclusive original titles — a surefire way to bring in at least a few gamers. But then Google shuttered both of its development studios in January of this year before they’d even had a chance to release a single title.

Stadia is today a shell of the cloud streaming empire Google planned for. With services like Nvidia’s GeForce Now and Microsoft’s xCloud offering much larger libraries for players to choose from, Stadia finds itself in limbo.

Are 30-minute trials going to save Stadia? Almost certainly not. They might bring in some extra sales, though, and every little bit counts when you’re barely staying afloat.