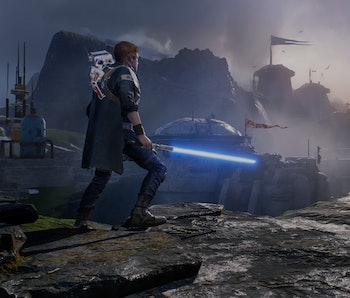 As the follow-up to the first decent single-player Star Wars game in approximately a century (give or take), Star Wars Jedi Fallen Order's sequel has big space boots to fill.

VentureBeat reporter Jeff Grubb offered some new and extremely unconfirmed details about Respawn's Star Wars Jedi Fallen Order 2 during his Giant Bomb Show, and they sent the womp rats running to ResetEra to discuss them.

Onto the next — Grubb offered two key anecdotes about the upcoming game: it isn't coming out until 2023, and it's going to target next-gen consoles only, particularly the PS5, Xbox Series X/S, and PC. (Sorry, PS4 plebs. At least it still streams Netflix, right?) As VGC notes, Grubb said that this decision was made in order to "take advantage" of the improved horsepower of the newer boxes. He also indicated that the producers of the game feel that it will become easier to get a PS5 in the coming months, which influenced their decision.

Perhaps Grubb's most surprising claim is that the game isn't going to share the word salad title of the original, instead opting for Star Wars Jedi 2. Given that this is the second Star Wars game to ever feature the concept of Jedi, this is a much clearer title, and we applaud EA and Respawn for their creativity. He also suggested that the Jedi 2 will be shown at the Star Wars Celebration in May, though it's not clear in what form that might take.

Pump and dump — Jedi 2 is perhaps the most anticipated of the onslaught of Star Wars games that have been announced over the past few years. Respawn itself is working on three projects set in the famous sci-fantasy universe, including a first-person shooter and a strategy game. There's also an Ubisoft open-world game and the Quantic Dream narrative game Star Wars Eclipse. Good luck with that one. The most recent Star Wars game is Lego Star Wars: The Skywalker Saga, which outsold Elden Ring in some territories, but it seems that many buyers were more interested in the minifigure in the collector’s edition than the game itself.