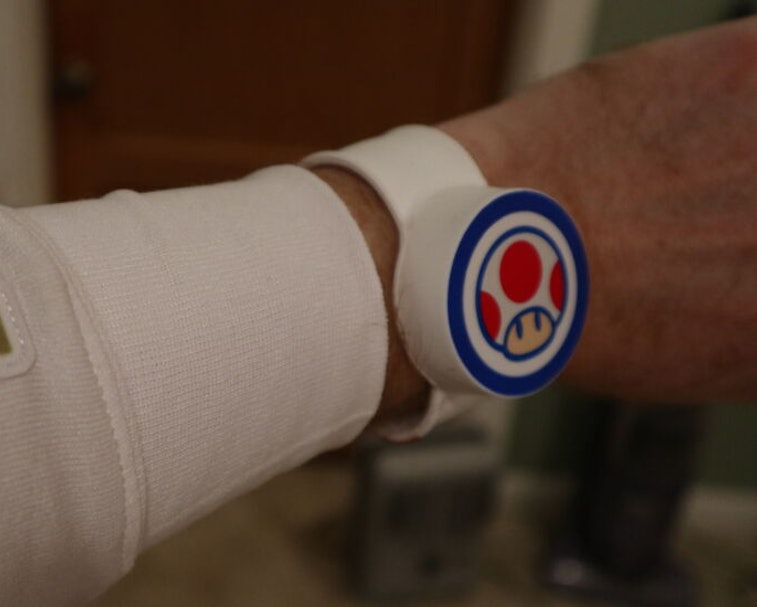 Super Nintendo World has, for a very long time, felt like a pipe dream (a green one, if you know what we mean) — but now the theme park is almost ready to open, and it’s looking pretty real. But no evidence of the park’s real, physical presence in the world of mortals has been quite as exciting as the Power-Up Band.

Ars Technica dropped a first look at the Power-Up Band today after having the good fortune of being sent a used one from a lucky previewer of the park. The whimsical slap-on bracelet is a way of keeping track of your Nintendo World activities through — what else? — gamification. The band keeps tabs on virtual currencies earned while playing around with Nintendo World’s many, many activities.

The Power-Up Band changes everything. Okay, that’s an exaggeration, but it does change just about everything about the Super Nintendo World experience.

Connect and play — Using the Power-Up Band is pretty simple: download the theme park’s dedicated app, scan a QR code on the back of the band, and start exploring. The band itself comes at an extra cost (about $32), but the same one can be used again and again to complete the park’s many tasks.

As you move through the park, you’ll be encouraged by the app — which also includes a handy map — to engage with all kinds of activities. Some are as easy as tapping your band (did we mention it’s RFID, too?) on various Question Mark Blocks throughout the park; some required puzzle-solving, the completion of mini-games, or hide-and-seek challenges.

Completing these tasks earns stamps or coins or keys. Keys are the most difficult to obtain, but once you’ve found two of them you can face off against Bowser Jr. in some sort of group fever dream. Incredible.

All the world’s a game — We already knew, from official previews and leaked pictures, that Super Nintendo World would be full of Mario Kart bumper cars and the cutest little rollercoasters you’ve ever seen. But so does just about every theme park — and Nintendo promised its park would be more interactive than any other.

The Power-Up Band is the perfect way to complete that lofty idea. It makes Super Nintendo World into what Nintendo knows best: a game. Of course, as Ars Technica points out, Nintendo is not the first to implement such a charming innovation, but it’s particularly intriguing for an experience built around gaming.

Of course, given the progression of the pandemic, it’s going to be quite a while before those of us outside Japan are actually able to use the Power-Up Band. For now, we’ll have to play another round of Mario Kart 8 Deluxe.