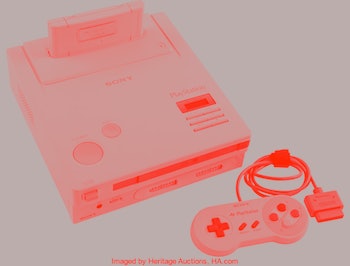 An extremely rare piece of gaming history is up for auction, and it can be yours if you're ready to drop six figures. The only known prototype for the Nintendo PlayStation, a nixed partnership before the Sony PlayStation as we know it, is open to bidding on Heritage Auctions. Bidding has already reached $360,000, making it by far the most expensive gaming item ever. The previous record holder is a super rare copy of Super Mario Bros. on NES, which sold for $100,150.

The last prototype standing — In the early '90s, Nintendo and Sony worked together on an add-on for the SNES that would have supported CD-ROMS. Reportedly, 200 prototypes were made before the partnership fell apart, with all but one believed to be destroyed. In place of the commercial label, a handwritten label says either October 6th, 1992 or June 10th, 1992.

The console survived after Sony founder Olaf Olafsson left for Advanta Corporation in 1998. A year later, he departed that post to work for Time Warner and left the prototype behind. Advanta filed for bankruptcy around the same time, and the console was bundled up with other random items to be auctioned off as something of a mystery box.

And it works! — YouTuber Ben Heckendorn was able to repair the console's CD drive in 2017, and Heritage Auctions confirms that the console is still playable. The folks at the auction house say they fired it up to play Mortal Kombat using a Super Famicom cartridge. However, because there's no known software developed for the CD drive, so it can only be used to play music.

If you want to have the rarest of music displays, in addition to all the lore, have at the bidding.

Update: Post has been updated to include information about Palmer Luckey.