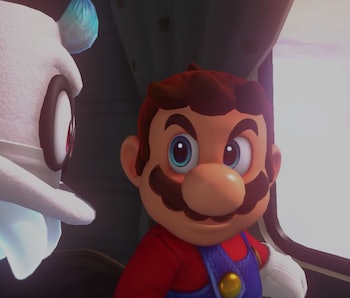 Hollywood’s Adaptation Machine is chugging along as productively and greedily as ever, most recently with news that a new, animated Super Mario Bros. is in the works with a baffling (yet somehow also paradoxically) predictable voice cast: Chris Pratt as Mario, Charlie Day as Luigi, Anya-Taylor Joy as Princess Peach, Jack Black as Bowser, and Keegan Michael-Key as... um... Toad.

Anyway. One fan-favorite name was frustratingly relegated to the absolute bottom of the film project’s official press release — Charles Martinet, the actual, original voice of Mario for nearly 30 years. According to a recent interview, however, Martinet has no plans to retire from his iconic role anytime soon, no matter how rude a major motion picture’s producers can be.

"I want to voice Mario until I drop dead. If someday I think I am no longer capable of doing it, I will tell Nintendo to look into finding someone else," Martinet said during a Q&A at Fan Expo Canada.

Even death ain’t gonna stop him — During his interview, Martinet also brought up a good point: Were he to retire or descend into that Great Pipe of the Beyond, the sheer amount of voice work on file after almost three decades’ worth of an estimated 100 or so games means there is plenty of Martinet content to keep Nintendo happy. “There are over five million audio files of me voicing Mario,” explained Martinet. “I go into the studio and record 45 takes of every sound I can think of, so I'm not going anywhere for a long time”

Another past Mario cartoon exists — While Martinet is widely known as the one, true Mario, there’s actually at least a couple of past instances of someone else stepping into the role. Aside from the notorious 1993 live-action movie starring the late Bob Hoskins, a Japanese cartoon film exists from 1986.

The Great Rescue of Princess Peach! is an odd time capsule piece of pop culture history, with an all Japanese cast and a far more verbose Mario than his source material counterpart. Recently, some extremely die-hard fans even spent a bunch of money and time restoring the original film cut for posterity’s sake. Somehow, we don’t envision anyone taking that amount of time for whatever upcoming Mario movie entry is on the horizon.