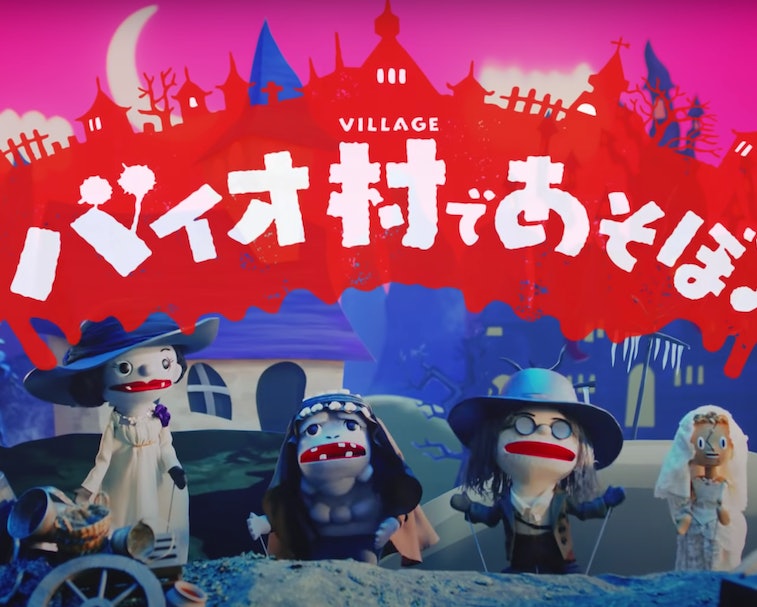 We’re just a week out from the much-anticipated release of Resident Evil Village, the tenth full-length title in the popular survival horror series. If the game’s trailer is anything to go by, it’ll be another fright-fest, filled with gore and monsters and, this time, one freakishly tall vampire lady.

But straight-up horror thrills aren’t for everyone. To that effect, Capcom has created a Resident Evil Village puppet show. The show is just as uncanny as you’d expect from such a mashup of genres. We’re talking shiny red tinsel instead of projectile blood splatters. It’s an inspired choice.

The new game’s main characters each make an appearance, though their voices are much cuter than in the game. Nine-foot-tall Lady Dimitrescu takes center stage, of course, and her transformation from innocent-looking puppet to bloodthirsty-vampire puppet is phenomenally over-the-top.

The puppet show is in Japanese and there aren’t any English subtitles as of yet, but you know the creators have done a great job because they’re unnecessary. The unsettling story comes through loud and clear.

Welcome to the Village — Resident Evil Village is shaping up to be one of the biggest releases of 2021. It’s the first full-fledged Resident Evil game in more than four years — so there’s a lot of long-awaited hype attached to the game.

As with all Resident Evil titles, story and tone-setting are of the utmost importance. We know the basic premise of Village, which is that players will explore (what else) a village inhabited by four groups of mutants: vampires, werewolf-like creatures, mermen, and — yep — puppets. Right on the nose with that one.

At this point the Resident Evil tone is well-established. Creepy, scary, terrifying, horrifying, and so on. This puppet show is kind of a genius move in that it turns that now-classic tone on its head by turning Village into a Japanese children’s show. That willingness to be playful makes the new game even more enticing.

More to come — The video definitely works as a one-off, but it seems Capcom has more puppet shows on the way for our entertainment. The video title (thanks to Google Translate for the help on this) says this is “Episode 1.” We’d gladly welcome any and all tinsel-gore content moving forward.

Resident Evil Village releases on May 7. You can grab a free Stadia Premiere Edition if you pre-order it on Google’s platform.