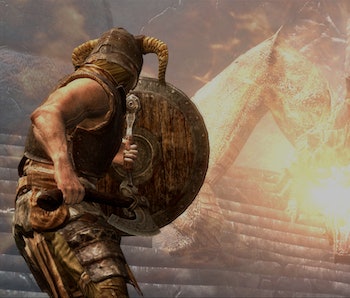 Bethesda Games has dominated the RPG landscape over the past decade-plus with franchises like Elder Scrolls, Fallout, and now Deathloop. In each of these series, players are immersed in a carefully crafted universe that has the ability to draw you in for hours. Now the experience will be coming to the physical world in the form of a board game through Modiphius entertainment, an RPG and tabletop game publisher based in London.

The Elder Scrolls 5: Skyrim — The Adventure Game is set to release in 2022 and will offer a gameplay experience for 1-4 players. Each round of play can run anywhere between 90 and 120 minutes. As far as character selection goes, players get to choose from six possible options that are each based on fantasy races within the Elder Scrolls games: Altmer, Dunmer, Imperial, Khajiit, Nord, and Orsimer.

Polygon was able to preview the game early and gained some insights into how the game actually functions. There are apparently two grandiose campaigns that players can choose to tackle, which will provide new context for the series’ lore, with one focus being a prequel to the events that transpire in the video game. In typical Skyrim fashion, though, the board game can also be played as a one-off experience, which would place an emphasis on a selection of thematic scenarios. This method of play evokes the feeling of accepting a lengthy side quest within the video game that might end up capturing your attention for longer than you thought.

Guiding the gameplay narrative is a deck of 600 cards, which can get up to 700 depending on the expansions you choose to include. This deck is also meant to be a semi-permanent fixture — players will have to add, remove, and reshuffle cards consistently when bouncing from game to game. In a lot of ways, the tabletop version of Skyrim seems to emulate the video game experience in that decision-making actually influences the playing experience in successive ways.

Skyrim — The Adventure Game is available for pre-order through Gamefound, a crowd-funding resource for tabletop games. The campaign ends on December 5, so you might want to get in on the action now if you have any interest.