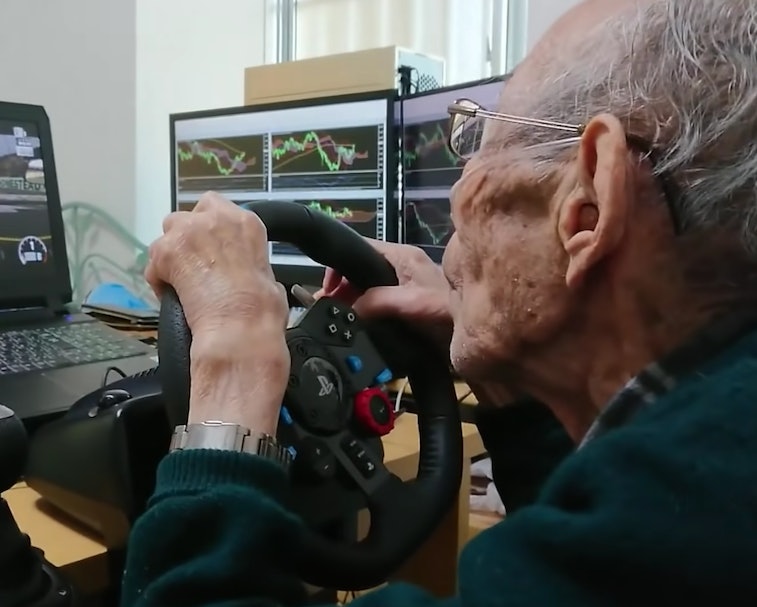 It’s easy to get jaded and bitter while immersing yourself in this dystopian world of memelord billionaires, creepy brain implants, and the Great Pokémon Riots of 2021. But every so often an extremely wholesome use of technology comes along to remind us that, hey, it ain’t all so bad, after all.

For those needing a pick-me-up this Friday, please allow us to introduce you to this 93-year-old Japanese man getting a kick out of “driving” his old car in a racing game simulation. It’s very endearing, it’s very pure, and it most certainly has nothing to do with Jeff Bezos or Donald Trump.

Ahhh. Now there’s that sense of childlike wonder we so badly needed today.

Taxiing back to the good old days — As first pointed out over at Kotaku, knowing the background to these videos honestly makes them even better. Apparently, the nonagenarian grandpa worked with cars for decades, first as a taxi cab driver in Tokyo during the 1960s, then as a dump truck driver from the 1970s through the 1990s. The car he just so happens to be driving in the above video is an old Mazda Savana RX-7, the same vehicle he once drove over 30 years ago. Need more old man driving goodness? Don’t worry, we’ve got you covered:

Someone get this man some Mario Kart — While our new favorite granddad appears to be playing 2017’s Gran Turismo Sport, there really is only one way forward for future video entries: his grandson needs to gift the man Mario Kart 8: Deluxe. C’mon.

Give the desperate people what they want: an elderly, retired professional driver squaring off against a bunch of pre-teens on rainbow-colored roads alongside Mario, Toad, Bowser, and Princess Peach. It’s the best-selling racing game of all time, after all.

Better to be in-game than on-road — Honestly, given recent trends in the real-life car industry, we’re far more comfortable watching people drive within virtual worlds than in reality. Not convinced? Consider this: is a 93-year-old former professional driver any more unreliable than Tesla’s “self-driving” vehicles, which seem to have a habit of crashing into many, many things... including cop cars?

That, coupled with tons of people clumsily returning to their morning commutes after over a year of remote work has us much more inclined to stick to our digital driving distractions over the very real, very deadly alternatives. Thanks for the reminder, 93-year-old Japanese grandpa driver.