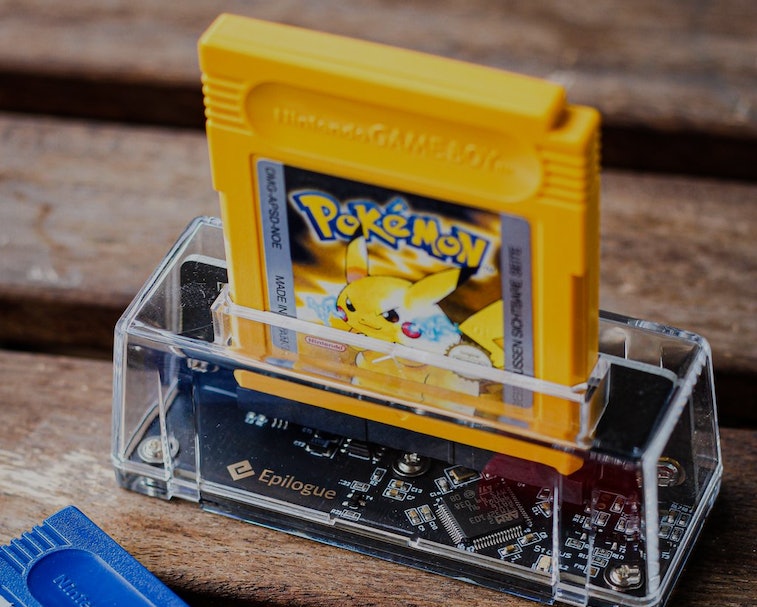 The folks over at Epilogue, a retro gaming startup that’s new on the scene, are behind the $49 GB Operator. Orders are currently open, with plans to ship in August of this year.

Smooth operator — The GB Operator works by ripping the game files and emulating the game via the Operator software. The software uses mGBA as its core emulator, which adds controller and cheat support. Playing your old cartridges is great, but what’s better is being able to backup saves on your computer and upload them back onto the cartridge. It’s an ingenious solution that protects users if — or, better yet, when — the battery on a cartridge dies. The GB Operator can also download the game as a ROM for you to play on other emulation hardware such as a modded PS Classic or Raspberry Pi. It beats illegally downloading ROMs from the website equivalent of a dark alley. It can also tell whether a cartridge is real or fake, something that would have come in handy when I bought not one, but two fake Pokémon games on eBay years ago.

For most people, these features alone would justify the, honestly, bafflingly low price of the GB Operator, but there’s more. The Game Boy Camera community, a small but thriving group of photographers, will be happy to know the Game Boy Camera is compatible with the GB Operator, allowing for the direct transfer of 8-bit images. Programmers developing homebrew games for the Game Boy or Game Boy Advance can use the device to flash their games onto empty cartridges. Unfortunately, it doesn’t play SD-based flashcards such as the EZ Flash Omega. Still, not bad!

According to YouTuber Retro Dodo, who's been testing out the GB Operator ahead of its launch, an incoming update will add more emulator and device settings, as well as the option to remap keys if playing on the keyboard.

Game Boy season — The GB Operator is only the latest Game Boy playing solution, with others such as the Analogue Pocket, GBA Consolizer, and the recently released Retron SQ popping up in recent years. The first two use FPGA chips, which basically emulate games on a hardware level that is supposed to feel more authentic to the real thing. Devices with FPGA chips are not cheap, and they’re hard to procure. The Analogue Pocket is the most sought-after retro handheld possibly ever, with pre-orders vanishing in minutes. The GBA Consolizer should open up pre-orders this year, but the kit, which requires assembly, is $170, and it’s $350 for the version that comes assembled (via Nintendo Life).

The $75 Retron SQ is a more affordable, albeit FPGA-lacking, alternative than the two above, but still more expensive than the GB Operator. Though it emulates games via software like the GB Operator, it lacks many of the features on Epilogue’s device. It can’t back up saves, download games as ROMs, apply cheats, or any of the cool stuff on the GB Operator. It also loads games at a much slower pace, which I’ve experienced first-hand. Several firmware updates have fixed serious issues, such as the limited GBA compatibility and the janky GBA resolution, but, if the GB Operator is the real deal, it doesn’t compare.

I don’t understand how the GB Operator does what it does for $50. The price just seems too good to be true. I mean, I just spent that much on Pokémon Red a few weeks ago. Although, it’ll be interesting to see if the device lives up to the hype when it ships this August. If not, it’s back to thirsting over the Analogue Pocket.