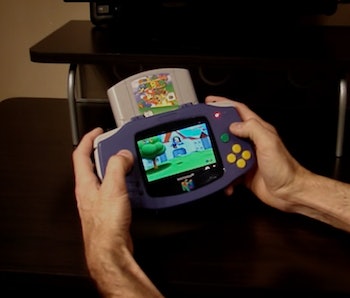 Who doesn’t love a good, modded-out homemade retro gaming rig? In an era of vicious next-gen console wars and exorbitantly expensive gaming PC setups, there’s just something so comforting about watching the fruits of dedicated fans’ collective, nostalgic labors. There’s a ton of great examples out there at this point, but one of the best editions might finally be too good for this hellscape we call reality. It’s called “The N64Boy Advance”

As the name suggests, the N64Boy Advance is an N64 console ported into a GameBoy Advance-like casing for portable play. We’ve been looking for the best retro gaming device for years, but it looks like a YouTuber named Hailrazer (aka Jonathan Wild) undertook this righteous endeavor almost a decade ago, and documented his results for all to see. Check out for yourself below, and try not to smile at his obvious delight.

The sum of its parts — Hailrazer’s N64Boy Advance is honestly an incredibly ingenious piece of hardware, especially when you consider it was made back in 2011. As noted in his video and over at RetroDodo last week, Wild’s design takes its parts from a number of different sources: obviously, there’s the original N64’s motherboard in there (with some added heatsink protection), alongside two sets of rechargeable lithium-ion batteries from a couple of camcorders providing 5-6 hours of continuous play. Wild also installed a 4.3-inch widescreen and an audio amp harvested from “an iPod-type amplifier.”

Then, instead of the not-so-great-feeling N64 joystick, Hailrazer swapped that out for the much-improved GameCube one. But perhaps the coolest part of the whole thing is the enclosure, which is actually one of those old GameBoy Advance-shaped carrying cases, making it perfect for housing all the various internal components.

The game gang is all here — To demonstrate, Hailrazer shows off classics like Super Mario 64, Banjo-Kazooie, GoldenEye, and The Legend of Zelda, all of which still look pretty great on the small screen. Although Hailrazer’s invention is from 10 years ago, it still looks like a fun and relatively straight-forward project for the enterprising DIYers out there. The Nintendo 64 was a piece of retro hardware by the early 2010s, so the nostalgia has only aged like fine wine, anyway. And with the recent (unofficial) release of new N64 titles, there’s never been a better time to take a trip down video gaming’s memory lane.