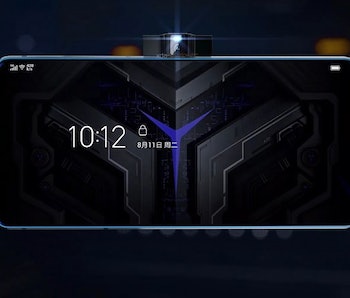 Just when you think smartphones are becoming boring, China is all like: how about a gaming phone with a 20-megapixel pop-up selfie camera that extends from the side. The friggin' long side of a phone. Yes, really.

That's exactly what Lenovo is allegedly cooking up. Leaked images shared by XDA-Developers, reveal Lenovo is planning to release a gaming smartphone under its Legion gaming brand with an unusually placed selfie camera. Why? Because why not? Smartphone designs are getting stale and with this implementation, there's no notch or hole punch to mar the display.

Insane refresh rate — The weird pop-up camera isn't the only thing exciting about the Legion phone. The phone's display is also supposed to have a 144Hz refresh rate with 270Hz touch sampling rate. That's a faster refresh rate than the 120Hz on Samsung's Galaxy S20 Ultra and the OnePlus 8 Pro. The better to game with.

Blistering charging speed — Another alleged feature that could turn heads: 90-watt fast charging. This is just nuts. We're talking charging speeds that are more than double what you can get with an iPhone 11 Pro or Galaxy S20 Ultra. 90-watt charging would be even faster than Oppo's already insane 65-watt SuperVOOC 3.0 charging, which can juice up a phone with a 4,000 mAh from 1-100% in 27 minutes.

Monster specs — It's a gaming phone so it can only be powered by the best. None of that mid-range nonsense. Other rumored specs include:

Everything about this phone looks and sounds absolutely bonkers. The specs alone would add up to a beast of a phone for mobile gaming. No surprise since gaming phones like the Asus ROG Phone II are spec monsters. For mobile gamers, the chunky size of gaming phones isn't an issue so long as it crams in every imaginable feature to fuel long gaming sessions.

One spec nobody seems sure of is the display tech. It's unclear right now if Lenovo will go with an OLED or LCD. With the leaks dripping out rapidly, Lenovo may be planning to announce this gaming phone soon. It already sounds way more formidable than Lenovo-owned Motorola's tragic foldable Razr.