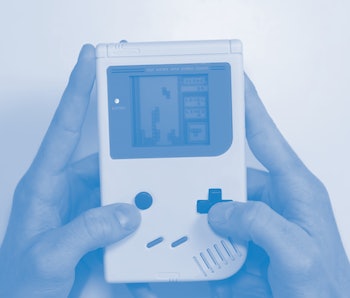 YouTuber Elliot Coll reimagines aspects of his favorite handheld consoles on his channel The Retro Future. His latest masterpiece/monstrosity switches the placement of a Game Boy’s buttons to make it more lefty-friendly. Coll admits himself that it probably wasn’t necessary, but found it easy to fall into gameplay.

The process — The aesthetic aspect was fairly straightforward, though hit with an initial snafu. Coll cut out equal squares around the main controls, but in the process damaged the original front shell, so two Game Boys were ultimately defaced. The controls were then secured in the opposite opening with super glue and toilet paper, and front-facing gaps were sealed with car body filler. Upon completion, Coll realized this lefty Game Boy didn’t actually mirror the controls; it swapped them. Even so, Tetris and Super Mario Land quickly felt natural on the modified console.

The more meticulous aspect came with reprogramming the board and soldering copper tape to traces of the buttons to have it function normally. Retracing clearly made up the bulk of this project, but just think of it as a more technical quarantine puzzle with the added thrill of hot metal.

The speaker grills remained on the lower right side, understandably more difficult to switch, but this also relinquished the minor ergonomic curve right-handed gamers are used to. Additionally, a smaller speaker needed to be installed to allow more room for the new d-pad support placement. The new speaker doesn't seem to detract from the 8-bit soundscapes.

Modified Game Boys — If you need more, even wilder transformations, Coll has a slate of videos to comb through. You can get a closer look at the super long Game Boy that makes a cameo in this video or see what a GameBoy SP looks like with two screens. Beyond manipulating Nintendo’s arsenal of handheld consoles, he also refurbishes anything from PS Vitas to arcade handsets to Tetris watches.