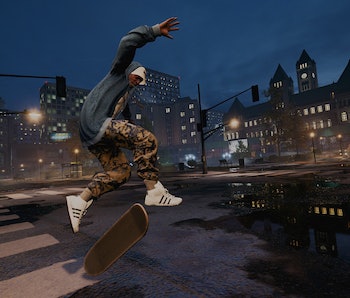 Get ready to shred your way back to notoriety: Tony Hawk’s Pro Skater, one of the most-loved and most-purchased franchises of all time, is being ported and remastered for Xbox One, PS4, and PC. The first two games, which are being remastered by developer Vicarious Visions, will be sold as one package with a release date of September 4, 2020.

Tony Hawk announced the game on Twitter today, his 52nd birthday. Some fans have also reported receiving text messages from Hawk himself to hype up the game.

The Tony Hawk’s Pro Skater series found wide-reaching success on both the Nintendo 64 and PlayStation consoles, and Hawk has always been vocal about how much he loves the games. The latest entry in the series — more than 20 years after the first was released — will bring back Pro Skater’s best features while adding some new ones, too.

Updated everything — As you’d expect in a remastered port, Tony Hawk’s Pro Skater 1 and 2 promises to take everything you love from the original games while also making them fresh for 2020.

The remastered game will have much, much better graphics (no surprise there) and the full roster of pro skaters from 1999. Everyone’s bringing back their signature moves, and they’ve all learned some new tricks in the intervening decades.

The new game will also include every level from the original games while also adding a few new courses to the mix. They’ll all be playable in local co-op mode or online multiplayer modes. Players will also be able to create their own custom skaters and courses using the game’s classic Create-A-Skater and Create-A-Park features.

Oh, and the music — That iconic mix of ska and punk rock that would get stuck in your head for hours after playing the game? Most of those tracks will be back in the new game, too, though details of the soundtrack haven’t been released just yet. According to Simon Ebejer, COO of Vicarious Games, a few tracks didn’t make the final cut because of licensing issues.

The revamped games will be available as a package for just $39.99 — a steal in comparison to the high prices of most modern console games. If the experience is as true to the original games as it seems from this early preview, it's guaranteed to be a giant, kickflipping success.