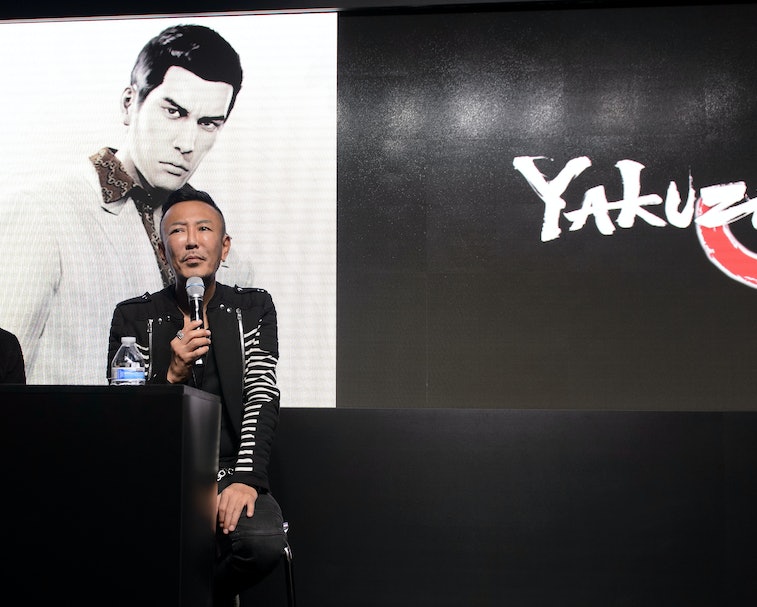 Toshihiro Nagoshi, creator of the long-standing Yakuza series and former creative figurehead at Sega, has his sights set on the next challenge — hosting a weekly radio show in Japan, through Tokyo FM. Nagoshi, together with Ami Kikuchi, another Japanese radio personality, will congregate every Thursday for a talk show that will emphasize wide-ranging discussions between the hosts and weekly guest appearances.

As reported by Famitsu, the name of the show will be “Future Lounge,” and it is the result of a partnership between Nagoshi’s new development studio, Nagoshi Studio, and the aforementioned Tokyo FM radio station. Both hosts will sit down with guests as they attempt to “dig deep into their commitment to creativity, their influenced works, and their outlook on life.”

The show will be set in a “fictitious hideaway bar lounge,” which immediately evokes imagery of a smokey, booze-soaked conversation taking place in an empty corner of a seedy dive. Nagoshi will guide the conversation along by asking the guest questions from a creator’s viewpoint, while Kikuchi will function as an inquisitive audience member, contributing questions as well that will perhaps ground the discussion. The premise doesn’t sound too far removed from a scenario that would take place in an entry of Nagoshi’s Yakuza series.

Pivot to radio— Nagoshi first cut his teeth at Sega during a period where the gaming industry was transitioning towards 3D graphics and presentation. As the only one in the room who knew how to implement the correct techniques when working in a 3D space, Nagoshi was able to helm the direction of Daytona USA, an arcade racing game from Sega, inspired by the popularity of NASCAR in the U.S. Since then, the multi-hyphenate creative went on to develop Super Monkey Ball, F-Zero GX, and then finally, the Yakuza series.

I say all of this to point out the fact that hearing someone like Nagoshi, who has been involved with every side of the gaming industry from development, to design, to script-writing, and even management, would be illuminating. If anyone could facilitate a conversation that would be both engaging and educational, it would be him.

Nagoshi outlined his enthusiasm for the program to Famitsu, stating the following:

“I've always liked radio, and when I actually tried it, I realized again that it was important to deepen the understanding of the guests. First of all, I want to throw my best there. I'm planning to talk with various guests from now on, but I hope to draw out a gap like the casual part of those who seem to be serious and the serious part of those who have a casual impression.”