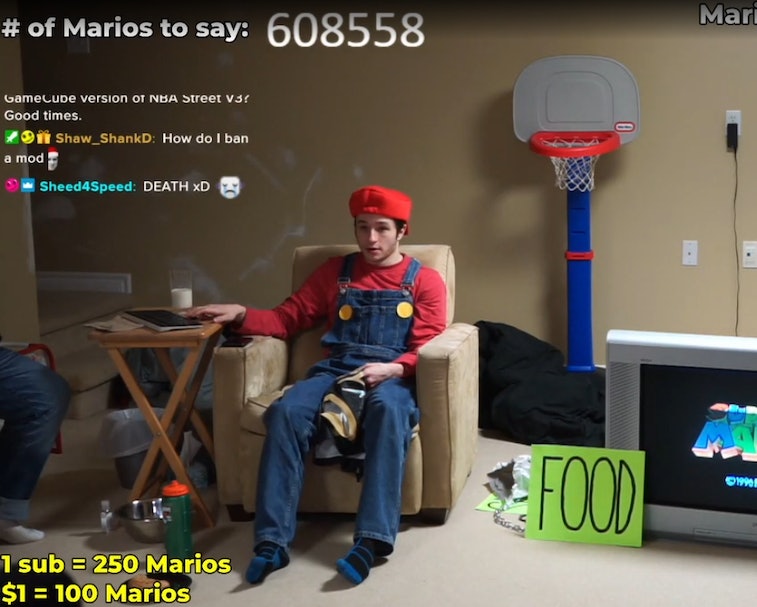 A Nintendo-focused content creator is making a name for himself again after a yearlong absence by spamming the word “Mario” out loud while dressed as Mario. Canadian streamer Nicro, formerly known as Nicroveda, has been live on Twitch for nearly seven days, all while saying little other than bizarre, ad-libbed quips with the word “Mario.”

Since he went live on December 1 at 8pm ET, Nicro has said “Mario” nearly 500,000 times. For one Twitch subscription, Nicro will say “Mario” 250 times. He’ll also say one “Mario” for every dollar or bit donated. It sounds insane, but it’s also weirdly satisfying to hear random Mario-themed phrases.

At one point, Nicro had nearly 1,000 concurrent viewers watching him say the word “Mario” in a Mario cosplay while handcuffed to a TV that plays a Mario title card on loop. Could this be a new world record for most “Marios” said within a week? Probably.

Who in the Mario? — This is all a part of Nicro’s return to Twitch, which he announced in a YouTube video before going live. Nicro’s largest following is on YouTube, where he makes content for over 150,000 subscribers about Super Mario Odyssey, Zelda: Breath of the Wild, Wii Play and other Nintendo titles.

A long Mario — In December 2020, Nicro explained in a YouTube video that he has been taking a long break from content creation because he was in the process of trying to move out of his parents’ house. The process stressed him out and took away his motivation to stream. According to his Fandom page, Nicro now lives in a house with two of his friends, who also make content.

Why does this Mario? — Here’s why this Marios, I mean, matters. More and more Twitch streamers have been doing marathon broadcasts focused around major, often exhausting events that contribute to burnout, such as subathons.

But such events can make a huge splash: YouTuber and live-streamer Ludwig broke Twitch records and blew up his audience during a long subathon back in April where he accrued over 283,000 concurrent monthly subscribers, taking the #1 spot from Fortnite streamer Ninja. And a group of Twitch’s top American streaming personalities recently hosted Shitcamp 2021, where they racked up millions of watch hours in just a few days with nonstop activities like dress-up, tug-of-war, and trivia.

This is Twitch culture — As Devin Nash, CMO of influencer talent agency Novo explains, Twitch is notorious for requiring an extremely high amount of livestreamed hours in its partner contracts. While this does not appear to be the reason for Nicro’s Mario marathon, watch hours are everything on Twitch.

On live-streaming platforms that lack a viable VOD component, a streamer can only be “discovered” or earn advertising revenue when they’re live. This reality leads to strange shticks, world records, sleeping streams and, apparently, a lot of Marios.

More like this
Will Gendron
6.18.2022 3:15 PM
Who's that?
Trick people into thinking you're Morgan Freeman with Voicemod's new AI freeware
Raymond Wong
6.28.2022 9:00 PM
Gaming
Sony Inzone gaming brand launches with headsets and monitors
Steven Wright
6.27.2022 4:30 PM
Gaming
Amid the crypto crash, should you buy a used GPU?