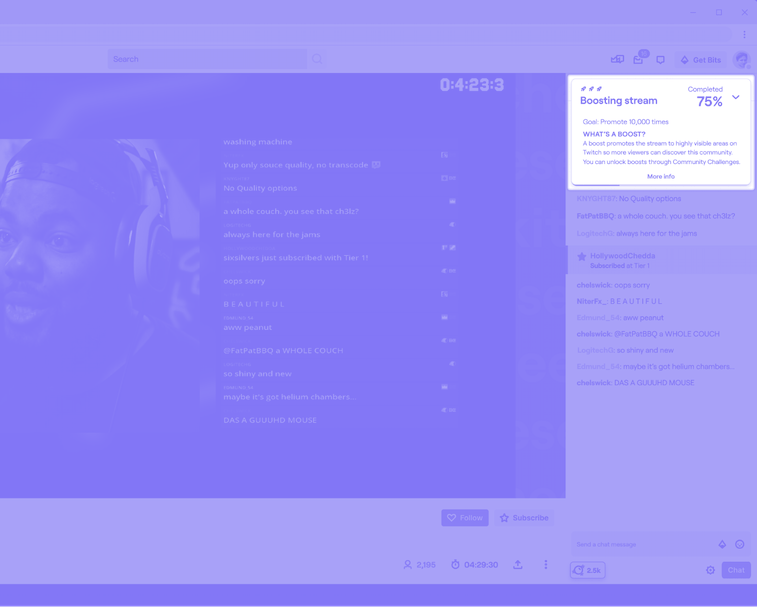 What would you be willing to do to support your favorite streamer? Sure, you could watch their content or even donate to them directly, but if you could, would you help grow their audience? That’s the idea behind a new Twitch feature called Boost.

Accordingly, over the next few weeks, Twitch will begin experimenting “with a select group of creators that are already part of the research community,” to test out how Boost functions as an embedded feature within the interface. This development comes on the heels of a slightly tumultuous period for the Amazon-owned company, after dealing with a hate raid problem and tightening up on licensing issues with background music.

Not the first rodeo — While the idea of having fans contribute to paid promotion isn’t new, having the feature permanently available in a given stream’s chat box is. Last December, the platform experimented with Boosts on a smaller level by making them part of a community challenge. Viewers could pool together points earned through watching a channel’s content, towards a Boost reward. When activated, the reward would promote the stream in question to highly visible parts of Twitch like "Live channels we think you'll like."

The big difference between last December’s initiative and the current experimentation boils down to cost. Earning a Boost reward through community challenges was free, and only required users to spend time consuming content in order to trigger. Now, promoting a streamer comes at two available prices: 1000 recommendations for $0.99 or 3000 for $2.97.

“What we’re doing with Boosts is giving viewers the ability to buy super high visibility promotions for their favorite creators ... we’ve heard directly from creators that it’s hard to get their names out there. It’s hard to utilize different forms of social media to grow their channels,” Rosok stated later during the aforementioned community stream. “This is just an experiment so it’s going to change.”

Pay to watch — Despite the small sample size, users in the chatbox during the community stream, which unveiled the Boost concept didn’t seem particularly enthused. Comments ranged from “bruhhh,” to “yikes,” to “PAY TO WIN NO GOOD!” It’s hard to blame them when users already donate directly to their favorite streamer. The Boost feature is nice in a vacuum, especially for a die-hard fan, but charging people to use it reads like a cash grab of sorts.