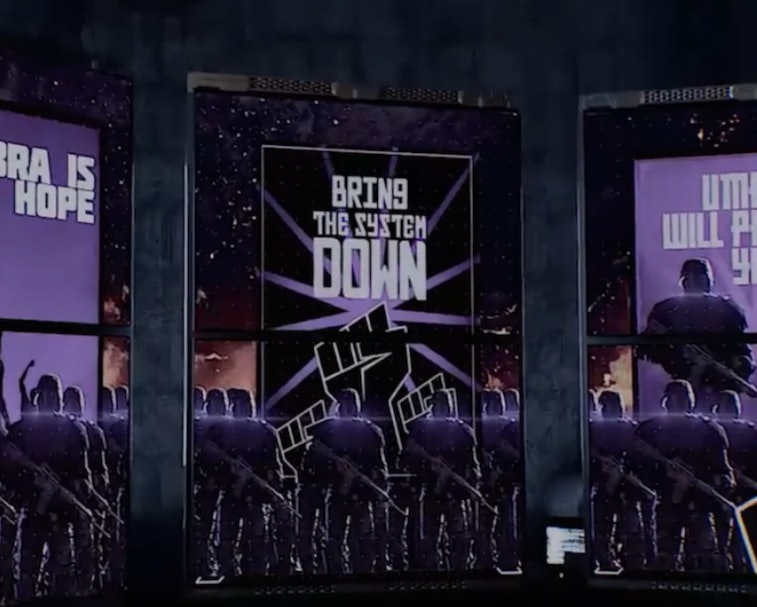 Today in “How did this slip through the cracks?” game developer Ubisoft recently apologized and promised to quickly remove the “Raised Fist” insignia used by its new mobile game's baddies after many noted it is nearly identical to the Black Lives Matter (BLM) logo. To add even more ridiculousness to the mix, this comes after the company declared its solidarity with the BLM movement, donating $100,000 to it and the NAACP.

No real relation to the game — The raised fist logo can be found in the cinematic opener to Ubisoft’s new mobile game, Tom Clancy’s Elite Squad, which describes the title’s generic bad guys, UMBRA, as a group claiming to “promote an egalitarian utopia to gain popular support, while behind the scenes [they organize] deadly terrorist attacks to generate even more chaos and weaken governments.” According to the game’s website, players are encouraged to recruit their teams to help “put an end to UMBRA’s campaign of chaos.” Many have pointed out that UMBRA’s methods and philosophies mirror many alt-right conspiracy theories surrounding the BLM movement.

Instances of violence and destruction at recent nationwide protests have been used as evidence to discredit the Black Lives Matter movement and support the idea it's been co-opted by people with anarchist intentions, requiring police to take aggressive action to stop it — "when the looting starts, the shooting starts," as Trump infamously tweeted. The truth, of course, is that the destructive behavior is in response to police violence that continues throughout the country, including the recent shooting of Jacob Blake.

Tone-deaf or willfully ignorant — In a comment on YouTube, a representative for the team behind Elite Squad said the resemblance to the Black Lives Matter movement was merely a coincidence. “Tom Clancy’s Elite Squad is a work of fiction and does not portray any real-world events,” the game’s YouTube account wrote. “However, we have listened to players who have pointed out similarities, and to avoid any confusion we have decided to modify the trailer in the next update.”

The raised fist intro is one thing — that symbolism isn't exclusive to BLM. But the themes of Elite Squad and conspiracies surrounding the real-life BLM movement are so similar, and the game comes at such a coincidental time, as to make it hard to believe that Ubisoft didn't rip its plot from the headlines. Violent anarchists co-opting a justice movement. That's a right-wing conspiracy theory about BLM. Ubisoft could have gone with any other theme for its game but chose that.

Fetishizing resistance — Rather than a coincidence, the new game looks a lot like a thinly-veiled attempt at profiting off the fetishization of police and the military. Then Ubisoft absolves itself by making a small financial donation. And if it was truly an honest mistake, then that speaks to a larger cultural issue in the organization.

Ubisoft says the intro will be changed in an update coming to Android on September 1 and soon thereafter on iOS. But that doesn't address the game's morally-dubious plot.