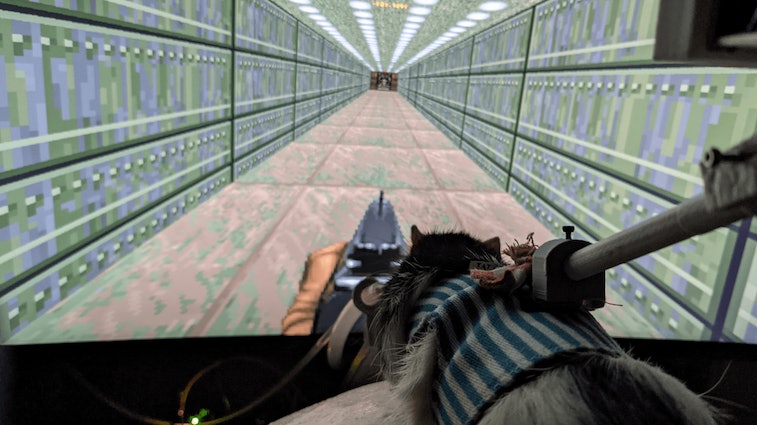 Remember Viktor Tóth? He’s a Hungarian software engineer and neuroscientist, and probably the only human on Earth who has taught rats how to play a first-person shooter game. And now he’s weighing the idea of streaming it all on Twitch.

The game in question is Doom II, a 1994 gore-ridden hell ride that, leading up to its launch, was described as “more popular than football.” On October 11, Tóth uploaded a post entitled “Rats in Doom VR” to his Medium page outlining the process of creating a VR setup for rodents, which trained three rats to walk through a corridor in DOOM II without any assistance.

Framing the project was a VR setup that automatically trained rodents to maneuver within 3D environments — at its core was a polystyrene ball that was maneuverable by ball bearings. The rats would run on the surface of the ball, its movement being tracked by motion sensors, ultimately corresponding to their player moving forward in the game.

Recently Tóth sat down with Futurism to dish on how the project came about, what was learned throughout the process, and the potential streaming future of the endeavor.

Bringing the show to Twitch? — When asked about starting a Twitch channel, one caveat stood in the way of that possibility: The rats’ stamina and their ability to keep running. After all, it would be difficult to maintain a stream where the subjects need a significant amount of time in between takes. Aside from this, Tóth certainly seemed interested in the idea of streaming his trained rodents.

“I think it’s a very valid way to monetize a project like this. The only problem is how long the rat can run for. I had Romero [one of the rats] running for 15 minutes one time, which was great ... So if you can actually get the rat to a point where it actually expresses a curiosity in the game, then it could get really interesting ... Twitch streaming would be a very valid way to get this in front of people.”

Besides exploring the idea of a Twitch channel, Tóth explained why DOOM II made more sense than say, The Legend of Zelda. The variety of environments in the game in addition to its relatively easy beginning and the malleability of its map, all contributed to his decision.

I’d highly recommend giving the interview a read as it offers a more interesting end-goal for the project besides the visceral reaction one gets from seeing rats operate an FPS.

More like this
Steven Wright
6.15.2022 12:00 AM
Hype life
Is anybody actually excited for PlayStation VR 2?
Steven Wright
10 hours ago
Gaming
Amid the crypto crash, should you buy a used GPU?
Steven Wright
6.14.2022 6:35 PM
Into the nest
Hollow Knight: Silksong is real, but you won't be playing it soon