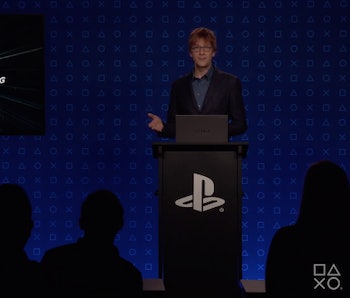 Sony gave us our most detailed look yet at what's inside its next-generation console in a strangely-dreamy spec dump on Wednesday.

The live-streamed event kicked off at 12 p.m. ET (9 a.m. PT) headed by lead system architect Mark Cerny, who confirmed a slew of leaks that have surfaced over the past few months. As expected, PlayStation 5 will come with custom GPU that supports ray tracing and 8K, and (limited) backward compatibility.

Here's what you need to know:

Cerny took the podium to introduce the principles that guided the PS5's design and specs that are pretty interesting once you get past the overall bizarreness of the event itself. According to Cerny, a lot of focus during development was dedicated to solving slow loading speeds. "For me, the SSD is really the key to the next generation of game-makers," Cerny said.

The company had "near-instantaneous load times" in its sights going into PS5. "No load screens — just fades down and fades back up again, immediately back in the action when you die," Cerny said. "Blink and you miss fast travel." We'll also see "vastly improved audio" in the new console.

Aside from that, though, Sony left us with a lot of questions. As we were told numerous times, the company is putting the emphasis on "finding new dreams." We're not quite sure what that means. We also didn't get a look at the box, which is a bummer, and uhh... was that a fake audience?

PS5 is slated to drop in the upcoming holiday season, so for now, we'll just have to keep lusting after those leaks.

More like this
Jackson Chen
6.23.2022 7:20 PM
Gaming
Everything we know about the PS5 Pro Controller
Steven Wright
6.15.2022 12:00 AM
Hype life
Is anybody actually excited for PlayStation VR 2?
Raymond Wong
1 hour ago
Gaming
Sony Inzone gaming brand launches with headsets and monitors