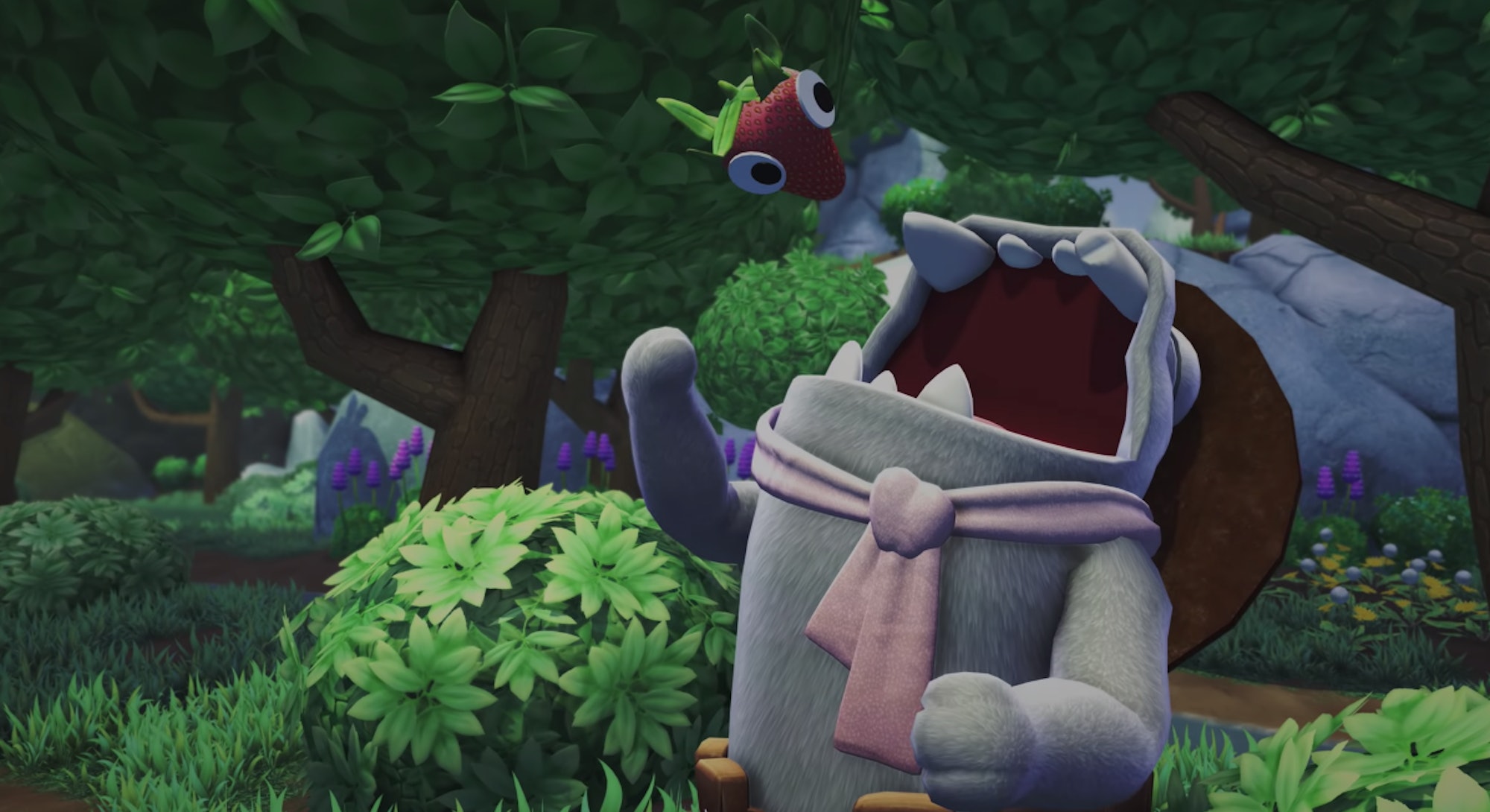 You wake up in a cold sweat, scrambling for a moment to find your bearings. It’s dark and something scuttles across the floor, but you can’t quite make out what it is. You squint to get a better view but… no, it can’t be, you think and rub your eyes. There it is, though, on the other side of the room with its bulging eyes, arthropodal legs, and bulbous red body. You throw the covers off, ready to bolt, but terror stops you in your tracks. There are raspberries where your toes used to be, and your right shin’s been replaced by what appears to be a spiralized pineapple.

That’s when you hear the music — quiet at first but beginning to crescendo, a warning dipped in bubblegum pop. “It’s kinda bug and kinda snack.” But it’s too late. The sentient strawberry in the corner turns its attention to you, and all you can do is scream...

This is, somehow, not the story of Bugsnax, an upcoming game teased earlier this summer ahead of the PlayStation 5's November release. The game tells the tale of adventurers called Grumpuses who have stumbled upon an island inhabited by creatures that seem part bug and part snack. But as they mercilessly gobble up the adorable wildlife, the Grumpuses begin to sprout snacks from their own flesh, too — food replacing limbs and appendages.

We'd since heard little about Bugsnax in the way of its plot, until its creator opened up this week to tell the world one crucial thing: it's not a horror game. But god, do we want it to be.

When Sony hit us with the first Bugsnax trailer during its Future of Gaming event in June, no one quite knew how to react. The Input Slack was typed-out screams and gibberish, everyone wondering what the hell we’d just watched. It was so cute… and yet so horrible. We were obsessed. Young Horses, the developer behind the brilliantly absurd title, Octodad: Dadliest Catch, had now presented us the most digestible, adorable body horror perhaps ever made — pure wickedness masquerading as a Dora the Explorer-adjacent adventure story.

The internet went wild with theories immediately. In July, Backseat Game Development released a cinematic masterpiece of a lore video, which tapped the desolation of Dark Souls to tell the harrowing tale of the Grumpuses’ ill-fated expedition to the cursed Snaktooth Island. The Grumpuses, intoxicated by the living, breathing snacks, are themselves beginning to change in terrifying ways.

“Blood stops flowing through their body and starts… swarming,” the narrator tells us. “Becoming an increasingly jumbled mess of bug and snack, over time they slowly fall into pieces, littering the countryside with their remains. Remains that are kind of bug, and kind of snack.”

Just days earlier, Kero Kero Bonito had dropped the full “It’s Bugsnax!” theme song, and it plays relentlessly in our heads as we plunge deeper and deeper into the rabbit hole. It’s the perfect complement to the cutesy horror that is Bugsnax, evoking a level of unsettling we haven’t seen since Courage the Cowardly Dog’s infamous “Doc Gerbil’s World.”

Except, as we’ve learned since its initial reveal, Bugsnax is not (intentionally) a horror at all. Young Horses president and Bugsnax creator Philip Tibitoski sat down for an interview with Shacknews this summer and put any uncertainty about its plot to rest. “The joke online right now is ‘Oh, is Bugsnax secretly a horror game?’ and, uh, I would not say that. It’s not a horror game,” Tibitoski said. Damn.

“Thinking about what these characters are experiencing... can lead you to understanding it as more than just a cartoon.”

It’s not entirely your fault for assuming it'd be more sinister than it actually is, though. After all, Tibitoski notes, just look at the cartoons we were watching as kids, which so often had higher-level jokes and commentary woven into the dialogue. That’s bound to influence both the creators and the fans who are consuming their content.

“I think, similar to Octodad, there’s a surface-level understanding of what it is, and then there is ‘Did that person just say what they just said?’ Tibitoski explained to Shacknews. “Thinking about what these characters are experiencing, that sort of stuff that can lead you to thinking about it a little more deeply and understanding it as more than just a cartoon, I guess.”

Whether that puts you at ease or not is an entirely different story. Either way, we can’t wait to play Bugsnax when it finally comes out.

PlayStation 5 launches November 12 for $399. Here's everything we know