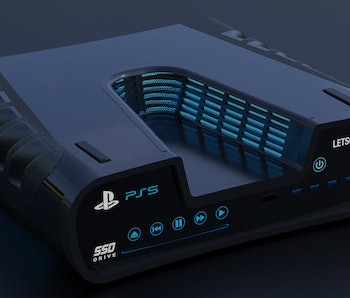 In less than 24 hours, Sony will livestream its PlayStation 5 event after it was rescheduled from last week in respect for Black Lives Matter. Sony has already shown us the logo and the DualSense controller in all of its white, black, and blue glory. We also know the PS5 will have monster specs with a GPU capable of ray-tracing, backwards compatible with PS4 games, and ridiculously fast flash-based SSD storage to basically kill loading times.

We still don't know what the console itself will look like, or how much it'll cost, or what exclusive games will be available. Word on the street is that Sony will use tomorrow's PS5 event to announce and highlight games. Not show the box or announce pricing.

But one leaker, known only as @IronManPS5 has been dumping a trove of alleged PS5 details on his Twitter account. These are unconfirmed and unverified leaks and rumors so take all of it with a heavy spoonful of salt. But if the information is correct... oh boy is the PS5 going to be incredible and polarizing at the same time.

Again, we're restating the obvious: these are unconfirmed and unverified rumors. Try not to get too overworked until Sony makes them official.

When do we see the box? — I'm as eager to see it as anyone else. The leaker claims Sony won't unveil the final PS5 design until July 7 on the PlayStation Blog. That's less than a month away!

"PlayStation Official Magazine UK will feature the final design of PlayStation 5 on the front cover of Issue 178, September 2020," reads another tweet. "The magazine will go on sale digitally in July 2020 and will be available in newsagents and supermarkets in the United Kingdom on July 28, 2020."

Sony has warned before that newer components like the flash storage and CPU and GPU would likely increase the MSRP for the PS5. $499 doesn't seem sketchy for a game console with ray-tracing. It'd still be hundreds less than a gaming PC with a comparable graphics card.

The leaker also claims the Xbox Series X will go head to head with the PS5 at the same prices in all regions. One interesting wrinkle is the rumor of an Xbox Series S, which the leaker says will cost $399 and launch worldwide in 2021. What Microsoft would cut from the Series X is unclear. Currently, the Xbox One comes in two flavors: One S and One X with the main difference being the latter supports 4K gaming and has a slightly more faster CPU clockspeed, significantly more powerful GPU, and more RAM.

Pre-order date — Sometime in July. The PS5 is expected to launch sometime this holiday season. The leaker says the Xbox Series X will launch on November 6. If that's true, expect a similar timeframe for the PS5. Before Christmas is a good bet. Maybe even before Thanksgiving to capitalize on the shopping season.

Wireless PS VR 2 — Sony's leaning more into VR. No details on what the PS VR 2 looks like or what features it will have except it'll allegedly be a wireless headset launching in 2021 for $399 in North America, €399 in Europe, and £349 in the UK.

Launch games — The leaker says a handful of well-known PlayStation franchises will return on the PS5 and be announced tomorrow:

The PS5 will also reportedly get three sequel exclusives to Spider-Man, God of War, and Horizon Zero Dawn sequel.

Will any of this come true? Who the hell knows?! But if they pan out, you all owe @IronManPS5 a follow.