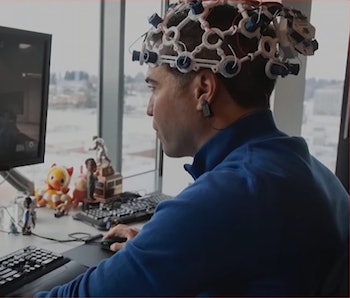 Gabe Newell, co-founder of popular gaming studio Valve, thinks using our hands to play video games will soon be a thing of the past. In a recent interview with 1 News of New Zealand (h/t Kotaku), Newell made far-reaching predictions about brain-computer interfaces being the real future of gaming. Why use your meat peripherals to play Super Smash Bros. when you could just think about the move you want to complete instead?

Meat peripherals — you know, the parts of your body used to perceive the world? Meat peripherals. A very standard way in which to refer to eyes and ears and hands. Nothing strange about that.

Anyway. Interesting word choice notwithstanding, Newell has an intriguing take on the future of gaming: controller innovation is essentially pointless, because all the best games will eventually use brain-computer links instead. “It’s indistinguishable from science fiction, now,” he says, which is a sentiment that rings true far too often of late.

With brain-computer interfaces, Newell says, we’ll be able to create experiences that are “far superior” to those that rely on human inputs. He then moves into a conversation far more philosophical than the average game-maker interview: what if we could edit our emotions, for example?

The tech is almost there — No matter how you feel about Newell’s more existential questions, it’s easy to agree with him on one thing: this does sound a lot like science fiction. In fact, Philip K. Dick’s iconic story Do Androids Dream of Electric Sheep? — the basis for the Blade Runner films — contains a machine called the “Penfield Mood Organ” that presents the exact moral conundrum posed by Newell.

But brain-computer links are more than just the stuff of sci-fi, now. Valve has been working with a company called OpenBCI to create a headset that will read brain signals and use them to create in-game experiences. The technology is still very much in prototype mode, but Newell is convinced it could be a reality in the near future.

But why? — Like any new technology, there are merits and downsides to brain-computer links. The upside here is a more hyper-realistic gaming experience: Newell mentions the possibility of “feeling” pain when you’re hurt in a game, for example. The major downside is, of course, risk of your brain being hacked, but hey, that’s a small price to pay for better gaming, right?

Call us old-fashioned, but there’s something to be said about gaming with a traditional controller with only your eyes for perception. Virtual reality continues to reach new heights, but there’s a certain je ne sais quoi about traditional video games — there’s a reason they continue to thrive despite newer, more immersive technologies.

Still, brain-computer links are moving full-steam ahead, and at some point in the near future, we’ll probably be able to buy them for exorbitant fees. Elon Musk, too, is a believer in the brain-computer future, albeit not necessarily for gaming purposes.

We’ll leave you with just one more quote from Newell’s interview: “Eyes were created by this low-cost bidder who didn’t care about failure rates…. It totally makes sense from an evolutionary standpoint, but it’s not at all reflective of human preference.” Make of that what you will.