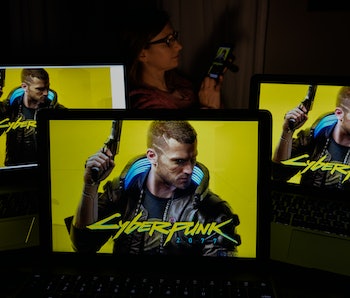 Is Cyberpunk 2077 cursed? Developer CD Projekt Red continues to suffer blow after blow with the release of the game. The latest news reveals that Cyberpunk 2077's next major patch, 1.2, will not go live until the latter half of March this year. CD Projekt Red explains the delay as the result of being hit with a ransomware attack earlier in February.

In an official statement, the developer said, "While we dearly wanted to deliver Patch 1.2 for Cyberpunk 2077 in the timespan we detailed previously, the recent cyber attack on the studio’s IT infrastructure and extensive scope of the update mean this unfortunately will not happen — we’ll need some additional time."

"Our goal for Patch 1.2 goes beyond any of our previous updates," they add. "We’ve been working on numerous overall quality improvements and fixes, and we still have work to do to make sure that’s what you get. With that in mind, we’re now aiming for release in the second half of March."

Bloomberg reports that the developer refused to pay the ransomware attackers, which barred employees from accessing their own platform. This means that all programs and tools required for the patch to work were out of reach.

Background — Of course, no developer wants to keep their fans waiting (especially Cyberpunk 2077 fans who have had to endure multiple rounds of dismay) and this much sounds clear in the official CD Projekt Red statement, which thanked followers their "continued patience and support."

CD Projekt Red's source code and other confidential information were exposed in the ransomware attack, including details about employees. This information was then reportedly sold off on the internet, exposing the private data of these workers to complete strangers. It's an obviously stressful time for employees who already have had to endure backlash online for Cyberpunk 2077's performance issues.

The game, which people waited years for, arrived not with a bang but a whimper. It was virtually decimated online and turned into a meme. CD Projekt Red's co-founder Marcin Iwinski even tried to calm nerves down with an apology video but it only backfired because viewers felt that Cyberpunk 2077 was rushed to gamers without its issues being resolved. On top of that, Iwinski admitted that gamers would have to wait for Cyberpunk 2077 to reach next-gen consoles, possibly until the latter half of 2021.

Some of this trouble sounds like the average hiccups developers go through upon launching a new title. That's understandable and even expected. But a good deal of Cyberpunk 2077's downfall sounds like CD Projekt Red brought it upon itself with corporate obstinacy and overlooking employees' needs. That's when it becomes hard to feel any sympathy for the company.