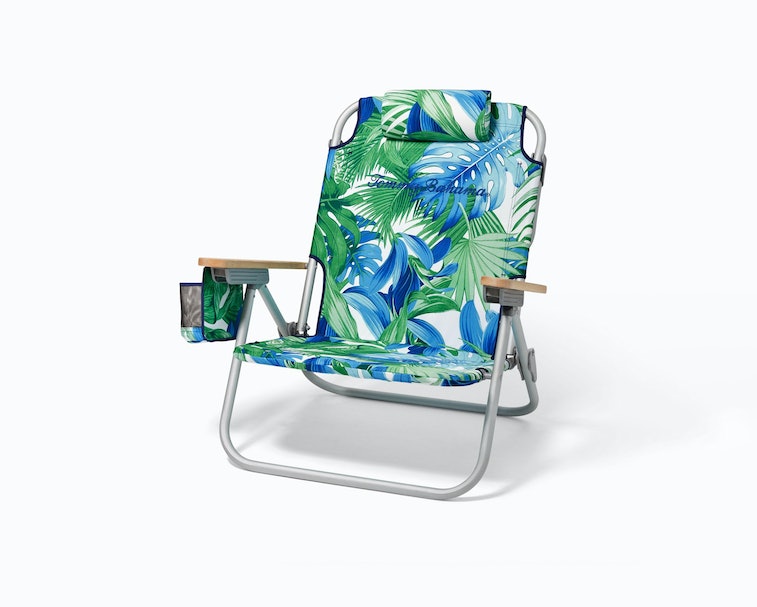 Tommy Bahama — the Seattle-based clothing and accessories company known for its printed silk shirts and island-living mentality — is, as my younger Input colleagues would say, “Boomer shit.”

The brand, accordingly, has become something of a pop-cultural punchline. In the recent absurdist comedy Barb and Star Go to Vista Del Mar, Barb — a middle-aged culotte enthusiast from Nebraska, played by Annie Mumolo — has a spiritual encounter with the real-life (or is he imaginary?) Tommy Bahama, portrayed by Andy Garcia, while on a tropical vacay. “Take my calloused hand,” he says to Barb before imparting some life wisdom.

In a 2014 episode of Family Guy, Peter goes shopping at a Tommy Bahama store in search of clothes “for a poor fat person who wants to look like a rich fat person” who intends to hit “on waitresses who are too young and thin to ever be interested in me.” (A narrator intones, “Tommy Bahama — five million uncles can’t be wrong.”) And then there’s this ClickHole classic: “Incredible: This Man Is Severely Depressed Despite Being Dressed In Head-To-Toe Tommy Bahama.”

I don’t give a shit that the chair is embroidered with the words LIVE THE ISLAND LIFE on the back.

Now, I don’t consider myself particularly fashionable, but I’m no Jimmy Buffet-loving uncle, either. You’ll know I’ve totally given up on life, or succumbed to the destructive pull of irony, if you ever catch me sporting, say, a Tommy Bahama Paradiso Parrots Camp Shirt. (“These parrots know how to party!” per the ad copy). But Tommy Bahama beach chairs? I will sit on a Tommy Bahama beach chair until my butt has melded with the polyester printed seat.

In fact, I am typing this very sentence as I sit, right here in my Brooklyn living room, in my Tommy Bahama Palm Fronds Deluxe Backpack Beach Chair. (“Kick back and bring out the refreshing libations, because it’s time to relax in a seat made to look — and feel — like paradise itself,” promises the website). I am so chill, even without a refreshing libation, that I don’t give a shit that the chair is embroidered with the words LIVE THE ISLAND LIFE on the back. (This is most definitely cringe, as my coworkers would also say.)

This folding beach chair isn't just something to sit on, it's the foundation of your whole beach-life vibe. Plus it has room for drinks.

Although I love swimming in the ocean, hanging out on the beach itself has never appealed to me, mostly because I hate a) getting sand in my nether regions and b) having to smear SPF 50 all over my pasty body, only to somehow get dramatically sunburned anyway. But my views on beach life changed last summer, during a pandemic-friendly getaway at an Airbnb in the Rockaways, a peninsula in the neighboring borough of Queens. Our host had Tommy Bahama chairs, which we folded up, strapped to our backs — my only complaint is that they’re a bit cumbersome — and took out to the nearby beach in the late afternoon, when the sun wasn’t beating down quite so hard and some of the crowds had dissipated.

It was there, sitting in our borrowed chairs and watching the waves crash and the seagulls fight over scraps of food, that my wife and I became Beach Bonnie and Beach Mark. I don’t think I’ve ever been quite so relaxed on a vacation, and it felt like the Tommy Bahama chairs — which do everything you’d want a beach chair to do, from reclining all the way back to keeping your “libations” cool in a padded pouch — played a big role in that. We were only a 15-mile bike ride from home, but it somehow felt as if, to once again quote the Tommy Bahama ad copy, we had “the best seat in paradise.”

I don’t think I’ve ever been quite so relaxed on a vacation.

I’m happy to say that paradise will be regained this weekend, when Beach Bonnie and Beach Mark emerge from their winter slumber. We’ll be taking the subway to a rental bungalow in the Rockaways to celebrate my birthday, Tommy Bahama chairs in tow. And this time, out on the beach, we’ll be shielded from the sun in the form of the Wavy Marlin Beach Chair Canopy, which attaches easily and supposedly affords UPF 50 protection. Take that, melanoma!

I cannot wait to recline in my Tommy Bahama chair on the seaside and read back issues of The New Yorker while slowly getting drunk on White Claw and occasionally checking to see what’s happening on Twitter. I will be living my own, urbanized version of the island life, and I just know that — even though I, like many others, have occasionally cracked wise about him — Tommy Bahama would approve.