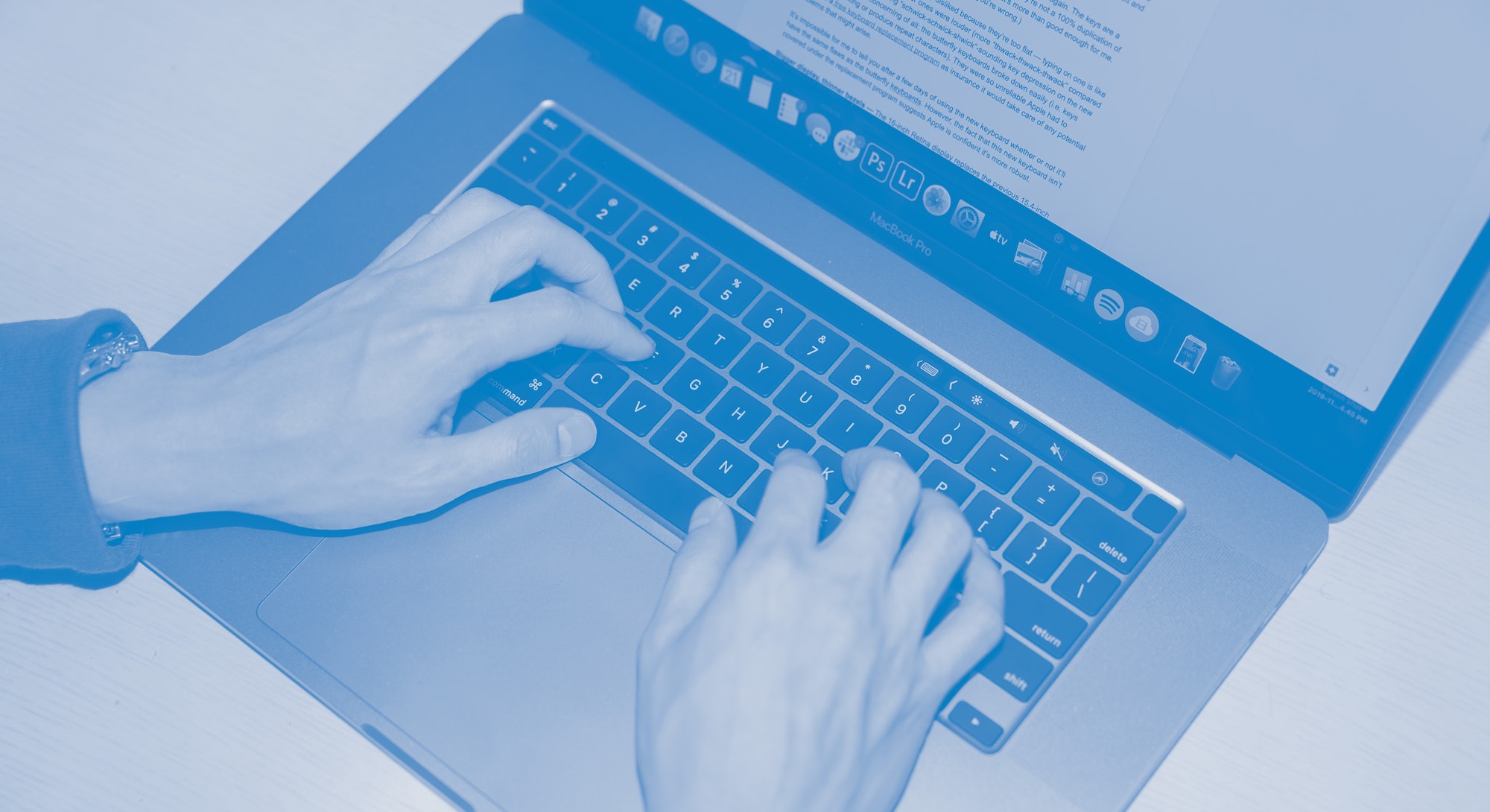 I’m so elated with the old new keyboard on Apple’s new 16-inch MacBook Pro that I could cry. Kudos to Apple for swallowing its pride and replacing the very embarrassing, very flat, and very unreliable butterfly-switch keyboards with the tried-and-true scissor-switch keyboards used in every one of its laptops pre-2015 MacBook.

I typed this review on the new 16-incher and it’s amazing how quickly I forgot about the stiff butterfly keyboards. It’s like an unhealthy relationship has finally come to an end and thank u, next. The new keyboard is a return to what wasn’t broken — it’s a back-to-basics approach to usability that Apple has embraced this year (i.e. making the iPhone 11 Pro thicker to fit a larger, longer-lasting battery and bringing back a traditional computer tower for the new Mac Pro).

The good keyboard is back — There’s nothing magical about the “Magic Keyboard” on the MacBook Pro except that Apple says it was based off the iMac’s keyboard of the same name. Each key has travel again — 1mm compared to 0.7mm on the butterfly keys — and the Escape button is thankfully its own button again, separate from the Touch Bar. The 2-in-1 Touch ID/power button is also detached from the Touch Bar, which makes it less likely you’ll accidentally hit the very annoying Siri button. Apple also restored the arrow keys to inverted-T design because, you know, that was correct the first time around.

Apple had a simple task when designing the new MacBook Pro: it could keep trying to make the universally disliked butterfly keyboard better or just go back to what worked. Apple chose the latter and the MacBook Pro keyboard is once again a delight to my fingertips. The scissor-style keyboard isn’t a 100% duplication of the pre-butterfly keyboards (they’re slightly shallower), but they’re bouncy enough to not compromise typing. The new keyboard is also quieter — the keys make a gentler, more satisfying “schwick-schwick-schwick” sounds when pressed compared to the butterfly keyboard’s unsettlingly loud “thwack-thwack-thwack.”

It’s impossible for me to tell you after a few days of using the new keyboard whether or not it’s more reliable than the butterfly keyboards, which broke down easily (i.e. keys would stop working or produce repeat characters). The butterfly keyboards were so unreliable Apple had to introduce a free keyboard replacement program to reassure users it would take care of any potential problems that might arise. However, the fact that this new keyboard isn’t covered under the replacement program suggests Apple is confident it’s more robust.

The most important thing is Apple fixed the keyboard — this alone is enough reason to buy the computer if you can’t stand the butterfly keyboard.

Bigger display, thinner bezels — The 16-inch Retina display replaces the previous 15.4-inch screen. We’re talking about a 4% increase in display size with slightly sharper 3,072 x 1,920 resolution versus 2,880 x 1,800. My eyes can’t really spot the resolution difference between the two displays. The 16-inch display also has thinner bezels, though, they’re not as narrow as on Windows laptops like the Dell XPS 13 and Huawei Matebook X Pro.

Otherwise, the display is as good as before. Same max brightness (500 nits) with True Tone adaptive brightness, and P3 wide color reproduction. It’s a great screen, but I would have loved to see Apple integrate a few of its fancy “XDR” display tech it uses in the iPhone 11 Pro and upcoming Pro Display XDR screen for the Mac Pro. Display tech like 1,000+ nits of peak brightness, HDR support, and OLED for truly deep blacks (very noticeable in moody shows like The Man in the High Castle) The iPad Pro’s 120Hz “Pro Motion” refresh rate and a touchscreen would have also pushed the 16-inch MacBook Pro display over the top into true “pro” territory, but it’s really wishful thinking at this point.

Really dope speakers — Pretty much all laptop speakers sound average. Even the ones with Harman Kardon and Bang & Olufsen stickers on them that promise simulated surround sound. The 16-inch MacBook Pro has a “high-fidelity six-speaker system with force-cancelling woofers” with Dolby Atmos playback support. In non-geek speak, it means the speakers are louder and produce fuller sound. They sound fantastic to my ears that are used to listening to tinny laptop speakers. Apple’s investments in improving sound quality — delivered across the board in Beats, HomePod, AirPods, and iPhone — are really paying out over the long term.

The beefed-up speakers have more low end for music that has more bass and the highs are less metallic at louder volumes. Compared to other laptop speakers, there’s real distinct separation between the left and right speakers. In the final season of The Man in the High Castle, I could hear things like gunfire and truck noise really pan from one speaker to the other with real definition. Make no mistake, the MacBook Pro speakers aren’t a replacement for nice cabinets or a Sonos system. But they do sound really rich for speakers that fit into a laptop that’s this thin.

Apple also says the three built-in microphones are “studio-quality” and are good enough to sub for microphones if you’re recording a podcast. Ehh, that feels like hyperbole to me. There’s a little more background noise cancelling going on in recordings, but I wouldn’t toss your Blue or Rode or whatever directional microphone just yet.

More power without the overheating — I’m talking about the performance last because it’s honestly not that exciting. In fact, the MacBook Pro’s guts are basically the same as the 15-inch MacBook Pro (2019) it replaced: 2.6GHz 6-core 9th-generation Intel Core i7 processor (or upgraded 8-core 9th-gen Intel Core i9), 16GB of RAM (configurable up to 64GB), and 512GB of SSD (configurable up to 8TB).

The marginally thicker and wider aluminum chassis allows less thermal throttling, which translates to better performance. Geekbench 5 benchmark revealed my 16-inch MacBook Pro with base Core i7 processor performed 7% faster on single-core and 10% faster on multi-core tasks than a 15-inch MacBook Pro (2018) with six-core Core i9 processor.

The improved thermal design doesn’t mean the laptop doesn’t get warm (it does), but only when you really push it hard. Editing a short 5-minute 4K video in Premiere CC spun up the fan to better dissipate the heat, but the MacBook Pro never got unbearably hot like the 2018 one did.

Apple also squeezed in a 100-watt-hour battery (the maximum legal limit for devices that can be brought on planes) and included a 96-watt USB-C power adapter. Battery life is good — Apple advertises up to 11 hours on a single charge — but in real-world use, I got about 7-8 hours, which isn’t Google Pixelbook battery level, but solid for a real desktop OS.

Going backward to move forward — There are few faults with the 16-inch MacBook Pro; Apple has finally come to its senses and traded thinness for utility. The most important thing is Apple fixed the keyboard — this alone is enough reason to buy the computer if you can’t stand the butterfly keyboard. The things I don’t like are relatively minor: the Touch Bar (it’s still more annoying than regular function buttons), no SD card slot (I can’t think of a more “pro” feature that creatives like myself really want back), and the weight (it’s only 0.3 pounds heavier than the 4-pound 15-inch MacBook, but I hate heavier devices).

The new MacBook Pro starts at $2,399 (the same price as the 15-inch did), which makes it out of reach for the vast majority of people who can’t (or don’t want to) drop so much money on a laptop. I’m loving the fixed keyboard and the bigger display is very spacious, but I’ve always been a 13-inch laptop person — they’re smaller, lighter, and cheaper. This 16-incher is for people who have endured the long painful past few years. I’ve had to suffer the flatness on my work MacBook Pros, too. But I’m waiting until Apple brings the improved keyboard to the 13-inch MacBook Pro. It has to be in the works. I can’t imagine Apple wants to grit its teeth and continue repairing busted butterfly keyboards any more than we want to keep complaining about them.