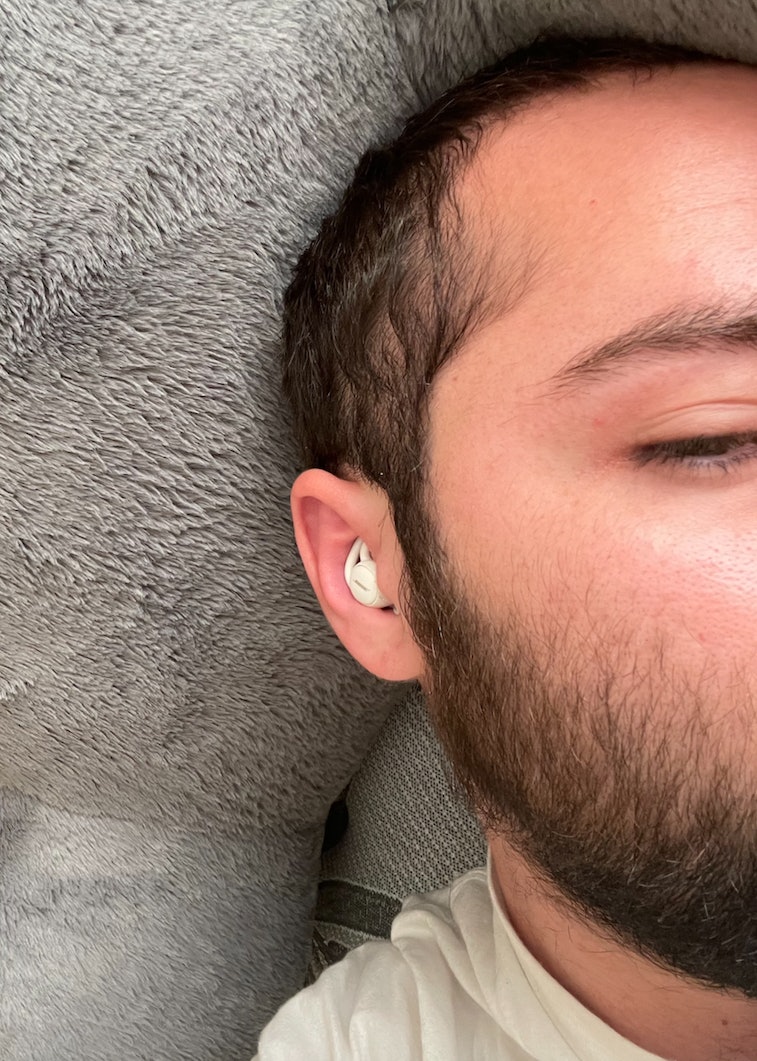 It only took me a few nights with the Bose Sleepbuds II to understand that earbuds you wear to bed are actually kind of great. I was definitely skeptical, after all, a lot of wireless earbuds are not exactly comfortable even after a couple of hours of use. But I was intrigued: Would they really help me “fall asleep faster,” as Bose claims? Would they be comfortable in my ears all night long? But folks, I’m here to tell you that the Sleepbuds are actually extremely good.

For context, I really like sleeping. I’m practically a connoisseur of the art. Some people say they can function just fine on five or even four hours of sleep. Not I — it’s either a solid eight hours of shut-eye or else my day will be a wash.

It doesn’t help that I’m generally sensitive to noise — and I live in a college town where it’s not unusual to hear parties raging at midnight on a Tuesday. To combat that noise, my sleep setup has constituted a white noise machine (this one) and an eye mask.

And so when I heard that Bose, the purveyor of high-end headphones, sells a $250 pair of earbuds designed specifically for sleeping, I was hesitant but also a bit interested. My white noise machine costs just $40 and works well at cutting out disturbances. But then again, sleep is important, and lack of it poses serious consequences. If the Sleepbuds were a wholly different experience, maybe $250 was worth it?

As you might expect from Bose, the Sleepbuds hardware definitely has a luxury vibe. A circular metal case that’s cool to the touch slides open to reveal two small, white earbuds held in place magnetically. Like other wireless earbuds, the case itself serves as a battery that can recharge the buds. My favorite part about the hardware is maybe closing the case, which makes a satisfying thud reminiscent of flip phones from yesteryear.

Like a white noise machine, the Sleepbuds don’t cancel out noise but rather attempt to drown it out with a different, more pleasing sound. Bose says it chose noise-masking over cancellation because no amount of cancellation can make distracting noise completely silent. With masking, the Sleepbuds introduce a sound that Bose says is pleasing and just loud enough that the inner ear and brain cannot detect outside disturbances.

Bose offers a host of different white noise sounds through the product’s Bose Sleep companion app. One, called “Altitude,” plays repeating sounds of airplanes flying overhead. My favorite track is one of cars passing by on a rainy night.

I think what most people wonder about this type of product is how the earbuds actually feel at night. Specifically, can you feel them when you’re sleeping on your side and your ear is pressing against the bed? That was definitely my biggest concern, and I was surprised that, no, you really don’t notice them. The Sleepbuds are tiny, and they fit snugly inside the ear canal, not protruding at all. Laying on my side, I don’t feel any pressure from the Sleepbuds.

Bose says the Sleepbuds have been “clinically proven” to help you fall asleep faster and while I can’t do a scientific study myself to validate that, I do wear the Sleepbuds every night now and love them. Pretty much all I can hear at night are cars passing by in the rain. During my use, I’ve sometimes forgotten that there aren’t actually cars passing by and that it’s just a soundtrack.

Bose's Sleepbuds II are earbuds that play noise masking sounds into your ears while you sleep.

Ultimately I think whether the Sleepbuds are worth the price comes down to how well you’re already sleeping and how much you might be willing to pay for a better night’s sleep. I wouldn’t describe my lifestyle as lavish by any means, but for me, $250 isn’t much in the long run for a good night’s sleep.