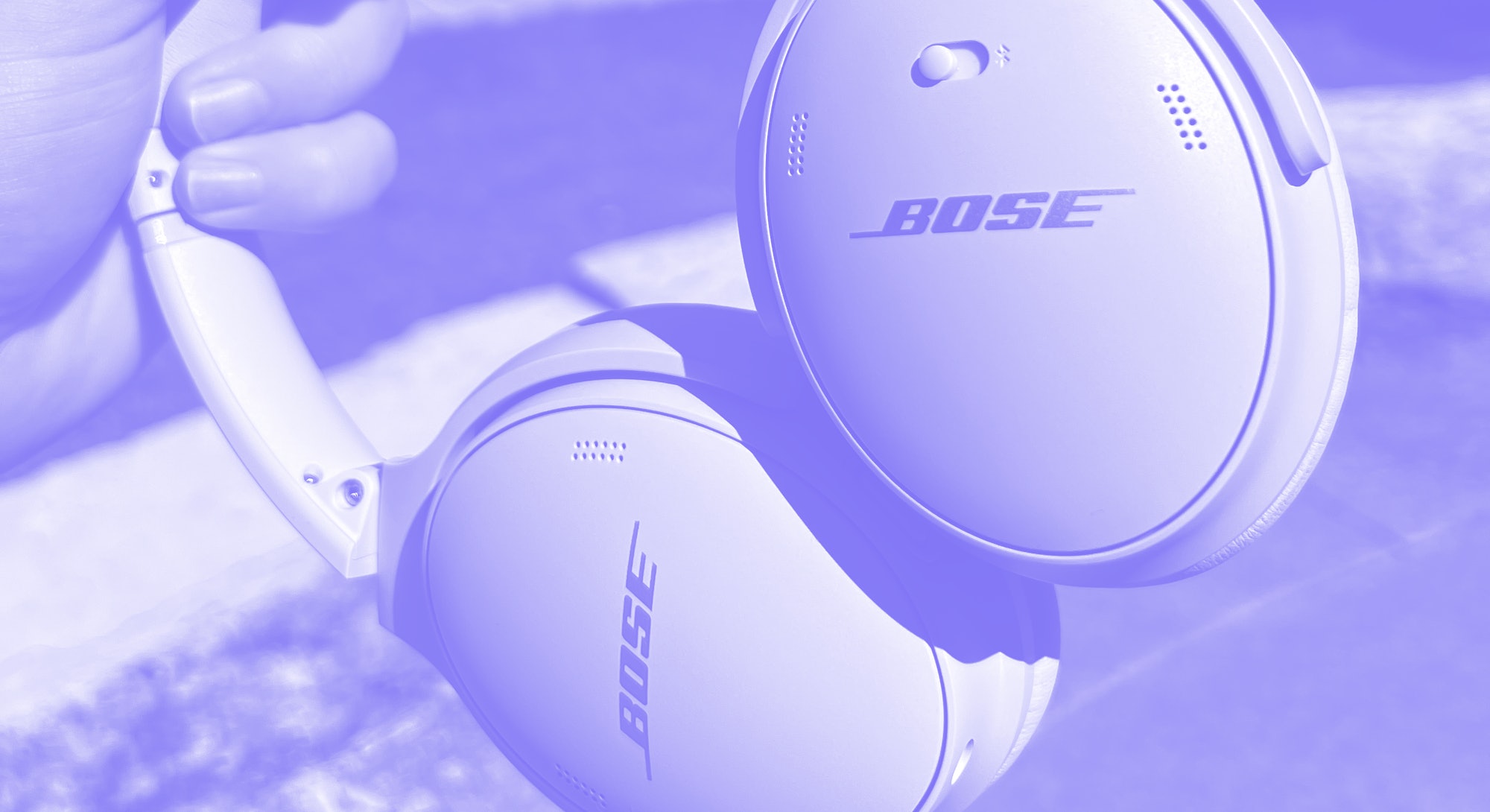 The Bose QuietComfort 45 headphones are a pretty easy product to review. Unlike the Bose Noise Cancelling Headphones 700, these ANC headphones don’t attempt to tread new ground. They stick to what works, and that’s just fine.

The 700 were created as a direct response to Sony’s terrific ANC headphones, currently led by the Sony WH-1000XM4. Those headphones had a more premium build than Bose’s QuietComfort line, more advanced features like transparency mode, and arguably the industry’s best implementation of touch controls at the time. USB-C fast charging and a terrific sound profile on the second and third-gen models didn’t hurt either.

The Bose 700 took a lot of cracks at the WH-1000XM4 to try and gain the lead back (including a USB-C port) but their massive and inflexible profile, and lack of comfort never really made them worthy of supplanting the QuietComfort line, which was allowed to stagnate for years. With the $330 QuietComfort 45, Bose returns back to the QuietComfort 35’s superior design with a few tweaks — and they’re better as a result.

Bose's Quiet Comfort 45 ANC headphones are a return to form.

The QuietComfort 45 ANC headphones address nearly every big problem the QC 35 (and the tweaked QC 35 II) dealt with against Sony in head-to-head matchups. They finally have a USB-C port, and the overall construction quality has been improved immensely. These are still lightweight headphones but they have almost no creaking in the build, a big issue with the QC 35. They’re leagues lighter than the Bose 700 and AirPods Max, of course, but they also come in 16 grams lighter than the Sony WH-1000XM4. I still prefer the look of the WH-1000XM4 overall, which is more modern. The QC 45 looks exactly like the now decades-old Quiet Comfort line always has, which means their rectangular case, about the size of the ovular WH-1000XM4 case, will fit into most bags.

Battery life is rated at 24 hours by Bose; this is firmly good enough with lots of ANC headphones rated at 30 hours or more. At 24 hours, you can make it through a weekend getaway with moderate listening just fine and probably have juice for the flight home. Thirty hours just gives you a bit more confidence to not bring your charger along. USB-C charging is more convenient than fast, however. Bose claims they’ll get three more hours of listening out of a 15-minute top-up, and take 2.5 hours to charge back to full. This all screams basic 5W charging.

While the QC 45 may not lead the pack in ANC or audio quality, they absolutely do when it comes to comfort. As nice as my AirPods Max sound, it’s basically impossible to walk around an airport with them. Their weight and odd clamp force is meant for sedentary listening. Walking around in those headphones means constantly hearing your footsteps rattle them in your ear. Even compared to the much more travel-suited WH1000-XM4, the QC 45 takes the crown. Their super pillowy earcups, lightweight, and perfectly distributed clamp force makes them stick to your head firmly when walking around without ever becoming overbearing. Whenever Bose gets around to refreshing the Bose 700, it’d be foolish to not take comfort cues from the QC 45.

After using some headphones with less than impressive ANC, the QC 45 were a breath of fresh air. While you don’t get the customizable ANC levels found on the WH1000-XM4 or the Bose 700, the one ANC mode that Bose provides here is very good. Bose isn’t going for total sound cancellation here, but it’s nailing the elimination of background noise — exactly what you’d want on a long airplane ride.

I used the QC45 while I waited for an appointment with my barber. While I could still hear the barbers around me talking, the buzzes and hums of the barber tools and the HVAC fighting the Austin heat were completely rolled off. The ANC never felt too overwhelming either so I could wear these for extended periods with nothing playing and be totally happy.

This isn’t as good as the WH-1000XM4 or the AirPods Max, which I still peg at the top of the ANC leaderboard. Those headphones do an eerily good job of erasing all but the loudest of sounds you encounter daily, but at $20 less than Sony’s, Bose isn’t exactly ripping you off here. I’d be happier with a $50 price difference between the two pairs to account for the other features the QC 45 are missing compared to the WH-1000XM4, but it is nice to see Bose being somewhat reasonable with the starting price relative to how they perform head-to-head. When both headphones are discounted you should expect QC 45 to always come in a bit less than the Sony ones.

The QC 45 also features a transparency mode for letting in sound from around you. While it doesn’t make anything sound distorted, it also isn’t the well-tuned passthrough effect Apple’s headphones can create. It’s good to see it here, but your mind won’t be blown by it. One thing I did appreciate however was how the headphones mix the outside sounds with the audio you’re playing. If you’re walking around a busy city like New York, you should be able to focus on your surroundings without losing track of the conversation on your favorite podcast.

Just like ANC, the QC 45 only has one EQ setting, unlike the basic customization you get on the Bose 700, and the advanced tweaking the Sony WH-1000XM4 allow. This is probably their biggest missing feature and the reason I’d still tell people to pay a little bit extra for the WH-1000XM4. The WH-1000XM4’s default sound profile is the better balanced of the two, and the option to tweak the EQ makes them all the more flexible for people’s music taste.

The default sound on the Bose is just close enough to being great. It’s actually infuriating how close they get to making me happy. The bass is very well balanced and clarity is a win all around but as someone who loves rock music, they aren’t quite there for me. Acoustic guitars sound great here, but electric guitars always sounded a bit off, hitting just slightly too grating. They also don’t let one instrument track stand out too much, which is not how the great rock anthems are supposed to sound. On the Black Keys’ “Gold on the Ceiling,” the guitar riff that breaks up the chorus and verses is almost lost to the surrounding instrument tracks. On a good pair of headphones, that riff pops and screams at you every time. On the QC45 headphones, it's just kinda there.

It’s all so frustrating because I know I can fix these with an hour of playing with an EQ adjuster, even the basic one on the 700s. The QC 45 headphones use the exact same app to connect to your phone as the 700s, but Bose has chosen to make customization a premium feature. For most popular music, these are going to be fine, but they just aren’t good enough to become my default recommendation for people over the WH1000-XM4.

The QC 45 are a good pair of headphones, flawed as they are on the music front. As a pair of dedicated travel headphones I think they beat everything else in their price category. I prefer to listen to podcasts and audiobooks during my commute over music, and the same is true for plane rides, and for that almost any headphone can make that content sound great. In the pure commuter use case, I care more about comfort and ANC quality, and the $330 QC 45 headphones strike the best balance there. If the subway was a daily part of my life I’d grab the QC 45 over the WH1000-XM4 in a heartbeat. Their comfort is top shelf, and the ANC is good enough that I could happily wear them every day.

But as an all-arounder, the $350 Sony WH1000-XM4 are still top of the pack. Sony is just an ear cup upgrade away on a future WH1000-XM5 next year from taking the comfort crown back, and their superb sound quality and ANC are still pack-leading in this price category. The only ANC headphones that sound better than them or cancels noise better is the $550 AirPods Max, a product with a much different use case thanks to its weight.

The QC 45 does just enough to keep Bose’s most popular headphones relevant, but the company still needs to figure out how it’s going to create a true flagship and win its crown back from Sony on a refresh of the Bose Noise Cancelling Headphones 700. Everything Bose has done on the QC 45 tells me the company is saving that fight for another day.