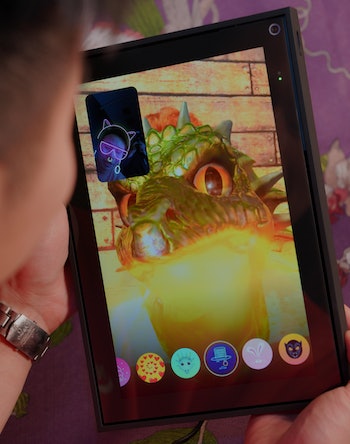 I’m kind of over smart displays. They’re like smart speakers: available from every company in every shape and size. The logos on the box are different but they all do the same basic things: they’re digital photo frames, for making video calls, for playing music, controlling your smart home, telling you the weather — you know the whole spiel.

Facebook’s new second-generation Portals, available in 7-inch ($129) and 10-inch ($179), are an improvement over the first-gen versions. Mostly, they resemble picture frames and not goofy tabletop kiosks. They’re also designed with privacy in mind (seriously).

It’s so easy to knock the Portal simply because it’s too ironic that Facebook, a company with a history of blatantly disregarding its users’ privacy, wants you to welcome a smart display that can hear and see you inside of your home. The jokes write themselves. But if you trust that the built-in privacy features (more on that later) are legit, the new Portal is surprisingly good. Facebook can make good devices (hello Oculus Quest!) when it really tries.

Blends in at home — The first-gen Portal looked like Facebook scored a great deal on wholesale Fisher Price baby monitors, stuffed Echo guts inside, and slapped the Facebook branding on it. The new Portal is less Toys R Us and more Design Within Reach chic; I’m cool with the unapologetic photo frame design with sharp corners; I especially like the cylindrical rod in the back that doubles as a container for the cable to snake out of.

I have a Google Nest Hub at home and it’s my favorite smart display. It doesn’t look out of place at home and neither does the Portal on my desk or bookshelf. The Portal looks even less like a smart home device when it’s displaying photos like, well, a picture frame. Even better is the fact that it works in landscape and portrait orientation.

This is dumb considering there are so many other places people store their photos, like Google Photos or Dropbox. Facebook also owns Instagram — a massive and very engaged photo platform it could have integrated somehow (even in limited form to, say, a user’s feed). It really feels like Facebook’s inability to look outside its tall blue walls severely hampered one of the Portal’s fundamental features.

Like having an Echo — Amazon has Alexa, Google has the Assistant, Apple has Siri and Facebook has… a nameless assistant that responds when you say “Hey Portal.” Like the other assistants, you can use the command to start a video call or get the weather or read the news or play a video. Its skills are very limited.

Which is why, thank god, it also supports Alexa. With Amazon’s assistant, the Portal does virtually everything an Echo does. I much prefer using Alexa for all my smart speaker needs because a) it’s smarter and b) it does more.

Is the speaker any good? It’s not bad for a photo frame with a smart speaker crammed inside of it. The speaker fills a small apartment with decent-sounding tunes. Just don’t expect it to rattle the walls.

The most fun video calling I’ve ever had — I’m a weird person. I do a lot video calls. With my mom (she loves using Animoji on FaceTime), with my overseas friends, and my family who live across the planet in Hong Kong and Paris. And it’s not just one platform. FaceTime, Skype, WhatsApp, Google Duo — I use all the most popular ones.

With all this frequent video calling, I’m in a weird niche expert position to objectively say the Portal is pretty good for making video calls. Audio and video quality are solid — it’s not crystal sharp 4K resolution or anything — but the call quality is at the top of my list and the auto-zoom feature that knows to zoom in on a single person or pull out for groups of people is really neat.

But, the best video calling feature is still the AR face filters, which already existed on the first Portal — only now there’s a lot more. These Instagram/Snapchat-ish face filters are hilariously entertaining and really good silence breakers during long video calls. Morphing your face into a foot or pineapple or a dragon that breathes fire when you open your mouth is such silly friction-busting fun that I actually looked forward to video calling people.

You don’t need to own a Portal to get in on the cheesy action. Portal video calls (and voice calls) work Portal-to-Portal or between any device (phone, tablet, computer) that has the Messenger or WhatsApp installed. Most of my video calls were with people on their iPhones.

Facebook’s inability to look outside its tall blue walls severely hampered the Portal.

Privacy first (or so Facebook says) — The Portal team is in an unenviable position of having to convince people the smart display isn’t big brother — that its camera isn’t secretly recording you and the far-field microphones aren’t eavesdropping on your conversations. To assuage any fears, the Portal has a switch that not only physically slides a cover over the camera, but there are two modes for electronically disabling just the camera or the camera and microphones.

It’s not just including kill switches for the Portal’s eyes and ears. When I asked the Portal team what kind of controls users have for restricting the data Facebook collects on them, like sending voice command recordings, I was told the following (also all detailed on the Portal’s privacy site):

Who is this for? — I’ve spent several months trying to figure out who the Portal is for. The obvious answer is for parents or grandparents (Facebook’s imagery on the box is a dead giveaway) who are likely to be less tech-savvy but still want an easy way to stay in touch with friends and family with video calls.

Besides, most people have a smartphone and you can just video chat for free on Messenger or WhatsApp. So why spend more money on a smart display? The Portal only really makes sense if you spend a lot of time at home, use Messenger or WhatsApp a lot, and store your photos on Facebook and want to see them displayed in a frame. Which is a pretty specific and limited set of needs.

These people exist — many of my European and Asian friends fit this description because these platforms are very popular there — but I live in the U.S. and I’m not that guy (fun as the face filters are). I was this very user 10 years ago, but I haven’t been a daily Facebook user in a long time. Had the Portal come out a decade earlier, long before Facebook was defending itself in front of Congress, I would have absolutely bought one for me and my closest friends and family. Facebook actually pulled off a terrific product for a certain kind of user, but if you're reading this review on Input, there's a pretty good chance that user isn't you.

Update: Added information about using the Portal app to add photos from your phone's camera roll to the Portal.