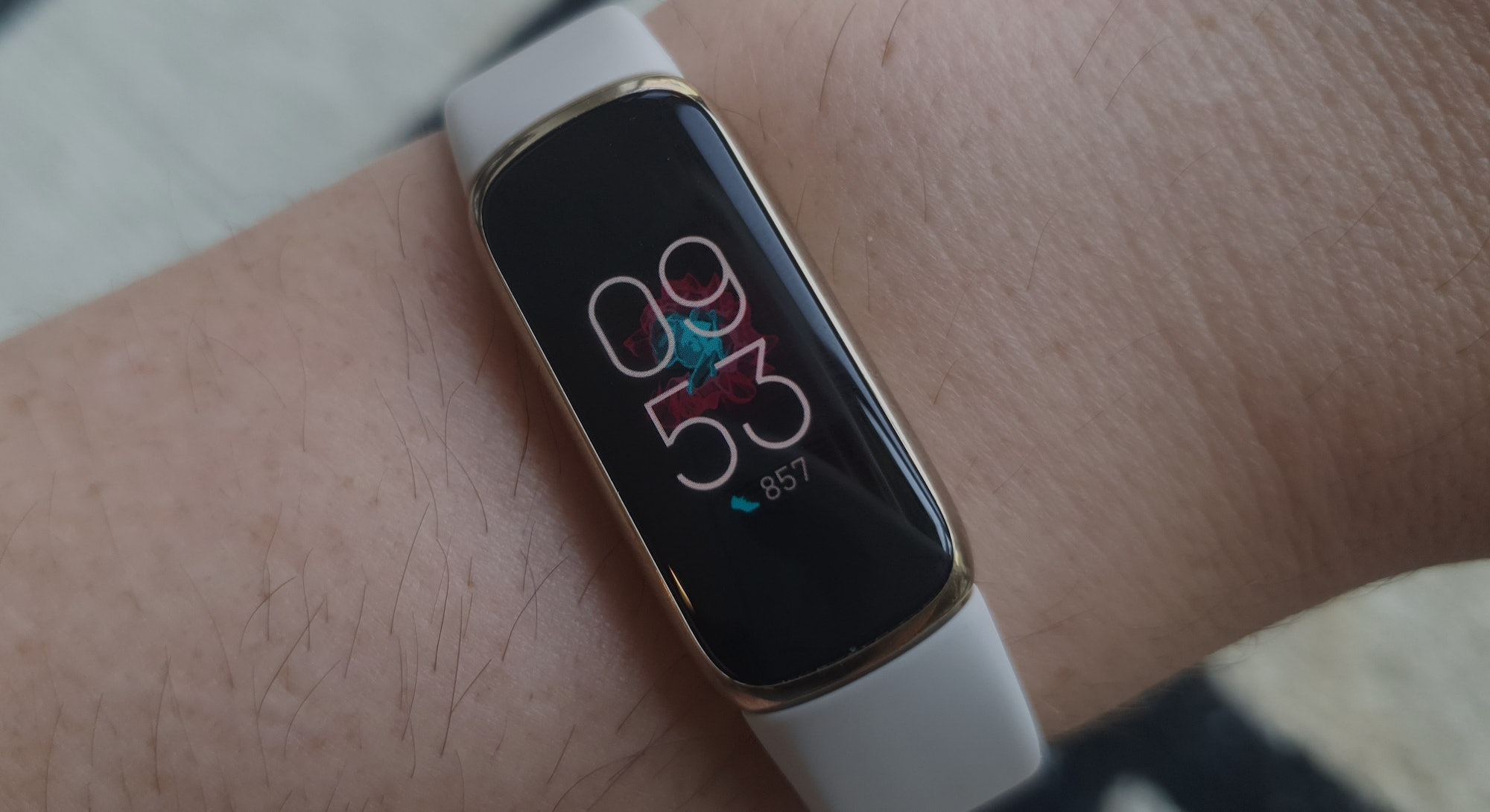 Despite having tried every major smartwatch, I keep coming back to Fitbits, even though they seldom last me much more than a year before dying.

I like only having to charge them every five days or so. I love the sleep tracking. I like that they don’t feel like a tiny version of my smartphone strapped to my wrist. And I like their $100-ish price point. But, traditionally, they haven’t been particularly pretty. The Luxe is Fitbit’s effort to change that.

Available in four finishes, the Luxe is meant to look more like a slim watch or a piece of jewelry and less like a fitness tracker. Three of the finishes (gold, black, platinum) come with silicone straps and a price tag of $149.95, while the fourth, special-edition version (in “soft gold”) and priced at $199.95 includes a chain-like bracelet from jeweler Gorjana.

The Gorjana bracelet is $99 and there are other strap options, like woven bands ($34.95), double-wrap leather ones ($49.95), and a stainless steel mesh option ($79.95). You can easily find plenty of knock-offs and imitations on Amazon for even less.

Each Luxe band also includes a six-month trial of Fitbit Premium ($9.99 per month or $80 per year thereafter). But neither that ostensible value addition nor the now Google-owned device maker flirting with fashion can atone for the Luxe’s myriad sins.

The Fitbit Luxe is a fashion-first fitness wearable that offers too little for the money.

Before donning the Luxe my daily Fitbit was a Charge 4, and before that, it was a Charge 3 (which died, a couple of months out of warranty after I already replaced it once). Unlike the Charge — or the slimmer, $99 Fitbit Inspire 2 — the Luxe has no physical buttons, so every interaction has to come from the touchscreen.

That’s really not great. Because while you can always use a button press to wake the Charge or Inspire or escape their menus, the Luxe depends on swipes and taps alone. Plus, only half of what looks like the Luxe's display is actually a screen or touch-sensitive — the top and bottom quarters of the display are just inert, glossy bezel (see the picture below).

Sure, you get a color display, but it’s one that’s less responsive and more likely to have you swiping incessantly to escape its menus than its monochromatic brethren. It’s a case of something that looks like an upgrade proving to be functionally a downgrade.

That’s not the only sacrifice. Compared to the Charge 4, you’re also losing Fitbit Pay (admittedly, only available on the $149.95 Charge 4 Special Edition, not the regular $129.95 one), Spotify controls, on-wrist SpO2 metrics (useful if you think you’ve contracted COVID), and an altimeter (which admittedly for most people won’t be a big deal, but for someone who chose to live on the top floor of a five-floor walkup for the sake of the unavoidable exercise, is minorly vexing).

It’s a case of something that looks like an upgrade proving to be functionally a downgrade.

With the Charge 4 you get more features for the same money, or less. Or, for $99.95, you can get the same core feature set and double the Luxe’s battery life with the Inspire 2.

Granted, with the Inspire you’re sacrificing GPS (which, incidentally, I’m convinced is faster to connect on the Luxe than the Charge 4), but I expect most people doing substantial workout sessions are carrying their smartphones for music anyway and might as well use them for tracking, too.

The Luxe is about aesthetics — the name says as much. Except... it still looks like a Fitbit, albeit one with rounded edges and a shiny exterior. Plus, the mesh bracelet doesn’t sit flush with the edges of the body (see below).

Now, sure, I’ve had the same problem with a Charge before, but that was with a $12 third-party mesh bracelet I bought on Amazon... and I promptly returned it and bought another one from a different seller that fitted properly. Fitbit’s own accessory doesn’t fit properly and it costs a nickel shy of $80. For added injustice, the Inspire 2’s optional mesh bracelet is $10 cheaper despite having very similar proportions to the Luxe's.

Don’t get me wrong, the included silicone strap fits perfectly (as you can see in the image at the top of this review or near the end), but it doesn’t do anything to make the Luxe look more glamorous. Instead, it totally erodes the very proposition the device is banking on.

There’s also the issue of the mesh bracelet’s magnet placement. Because it doesn’t fold back on itself as most third-party offerings do and the magnet is in the outer clasp, it’s liable to come undone and stick to all sorts of things. In my case, that’s included cast iron pots and pans, the legs of my desk, and — in one instance — a shelf of duck sauce in a Wegman’s grocery store.

I’m obviously not enamored with the hardware, but what about Fitbit’s software for the Luxe? Well, the app is the same no matter which Fitbit you buy. All that changes is which metrics the hardware feeds it, and how long a trial you get of Fitbit Premium, the company’s subscription service that promises deeper health insights, and offers training programs and fitness videos.

Sadly, neither of these Premium features prove indispensable. While the insights tend to be the same ones over and over “drink more water,” or “try to go to bed at the same time,” or similar platitudes no matter your figures, the video selection pales in comparison to what’s freely available on YouTube, or available for a fee from the likes of Peloton.

It’s not just that the catalog of video is limited (some categories only have a dozen or so videos) and largely aimed at absolute beginners, it’s that there’s no real incentive to complete classes. The production value of the videos is admittedly high, but they’re totally disconnected from the wearable — there are no on-screen metrics, no leaderboard, and nothing else to keep me feeling sufficiently motivated / guilty to ensure I follow through with any training session, let alone a multi-week program.

The production value of the videos is admittedly high, but they’re totally disconnected from the wearable.

For added annoyance, the Inspire 2 comes with 12 months of included Premium, while the Luxe ($50-$100 more expensive, depending on the model) only offers half that.

I’ve worn a Fitbit almost every single day since August 2013 when I first put on the original Flex and marveled at the prospect of something so small being able to monitor not just my steps, but how disturbed or peaceful my sleep was. I’ve since been wowed by the Charge HR, underwhelmed by the Blaze and Ionic smartwatches, and charmed anew by the Alta and Inspire ranges... which is why I think the Luxe has proven such a letdown for me: it asks too much while delivering too little.

Instead of looking like an heiress at a gala dinner, it looks like a child who’s gotten into a box of costume jewelry.

I concede I’m not the target market (male, not known for being notably stylish, price-conscious), but I’m a massive Fitbit fan who’s long wished the company’s hardware was a little more chic. I could forgive the Luxe its missing features and inflated price tag if it was extremely stylish, but it isn’t. And the shiny finish picks up nicks and scratches almost immediately. Instead of looking like an heiress at a gala dinner, it looks like a child who’s gotten into a box of costume jewelry.

Unless you truly love the available accessories for the Luxe, you’re better off buying a Charge or an Inspire... or waiting to see if the likely Luxe 2 makes up for Fitbit’s missteps.