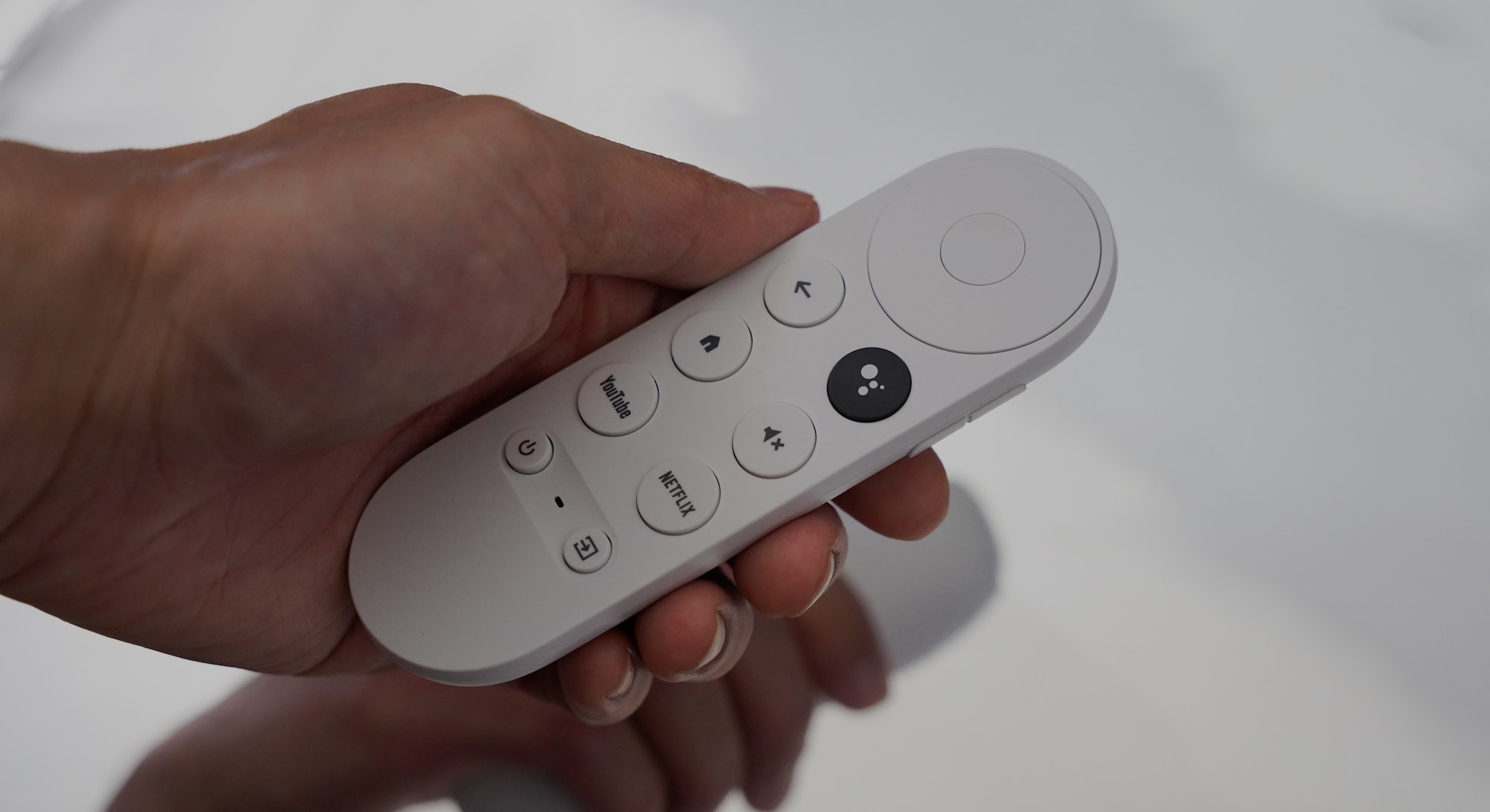 Google launched Chromecast in 2013 with a simple idea: beam content from your phone, tablet, or laptop to TV or monitor via a small dongle that plugs into its HDMI port.

At $30, Chromecast became a hit overnight. Google updated the Chromecast two more times over the years and also added a 4K Chromecast Ultra model in 2016. Everyone generally agrees that Chromecasts are good.

What would make it better? Easy: a remote. So that’s exactly what Google is including with the Chromecast with Google TV.

But that’s not all. The “with Google TV” part also means the new Chromecast comes with a slick new TV interface for discovering content. It’s basically an improved version of the Android TV interface found in set-top boxes and smart TVs, and is Google’s answer to what you get on an Apple TV, Roku, or Fire TV device.

Long story short: the new Chromecast with Google TV is really good. I have some minor quibbles, but $50 for a 4K HDR streaming dongle with a Google Assistant-equipped remote and content-friendly interface makes it a perfect stocking stuffer.

Chromecast with Google TV works exactly the same way as previous Chromecasts. Set-up couldn’t be easier. Plug the dongle into your TV’s HDMI port and connect it to the USB-C-to-USB-A cable and power adapter included in the box. Pair the dongle using the Google Home app and — voila — you’re halfway done. The other half is setting up the remote, which takes two AA batteries (also included in the box).

The voice remote is nice and simple, too. It’s minimalist and has only the buttons you need. At the top is a directional pad (it looks like an iPod click wheel, but it’s not), then buttons for going back, Google Assistant, Home, mute volume, YouTube, and Netflix. The Assistant button works like it does on a Fire TV’s Alexa remote: press and hold down the button then speak to search.

Most streaming stick/set-top box remotes stop right here with the buttons. I appreciate that Google went further and added buttons for powering your TV on/off, changing video inputs, and volume buttons on the side. It’s really convenient not having to constantly switch between my TV and streaming stick remote.

I like everything about this remote except the volume buttons. They’re too flat and should have been on the front of the remote, not on the side.

Oh, there are also three colors: snow (white), sunrise (pink), and sky (blue). Each with matching remotes and batteries.

You may recall Google once used the Google TV name a decade ago when it unsuccessfully tried to own the living room. This was pre-Chromecast. Now Google TV is back as an easy-to-navigate streaming interface that puts content front and center. And it’s as good (if not better) than what you find on the Apple TV, Roku, or Fire TV.

To be clear, Google TV isn’t replacing Android TV, which is the interface you’ll find on other streaming devices and smart TVs. Google tells me Android TV will still exist and continue to be supported, but it’ll be up to device makers to decide to update to Google TV or not. Honestly, every Android TV device should switch to Google TV because the interface is so much better.

Google TV doesn’t reinvent the wheel. It’s basically a mashup of Google cast, parts of Android TV, Google Photos, Google Search, and the Google Assistant. It’s synergy between Google’s top services, and I’m surprised it took so long to wrangle them together.

Google TV is split into several tabs and rows just like you’d find on other streaming interfaces. At the top is a menu row that’s self-explanatory: Search, For You, Movies, Shows, Apps, Library. If you subscribe to any live TV services like YouTube TV, you’ll get a Live tab as well.

Below the menu is all your video content. You can watch by specific app on YouTube, Netflix, Disney+, HBO, etc., or by genre. There’s a “Continue watching” row just like on other streaming devices. One thing to note: there’s no Apple TV app. But what Google TV does really well is surface content regardless of the service it’s on.

For example, searching with the voice remote for Jet Li movies brings up results for all of his movies. You can then watch them on any services you’re subscribed to. If a movie is on a service you aren’t subscribed to, it’ll tell you where it’s available and how much it costs to either rent or download it. Google TV is pain-free and makes content discovery less frustrating. There’s no need to search within specific apps.

Another really great Google TV feature is the watchlist. I’m not talking about adding content from Google TV itself. When you search for content on a phone, tablet, or computer on Google you can click the watchlist button to add it to your Google TV and it shows up instantly. No more randomly coming across a cool TV show or movie and then having to find it again on a streaming device via an content provider’s app. Now you can just add the content to your watchlist and the next time you fire up your Chromecast with Google TV, it’ll be there, ready for viewing on whatever service.

The watchlist is this super simple feature that hardly sounds like a feature at all. There’s really no going back to any streaming experience with all the frictions of content discovery. There’s only one thing I wished the new Chromecast did better. I wish it supported multiple user profiles as opposed to only one Google account. This is most apparent for YouTube, where I actually use a separate Google login. The limitation is entirely because of Google TV pulls from a single user account’s search history for the watchlist, displaying Google Photos as a screensaver, and Assistant voice searches. Multiple accounts would complicate things. Still, it would have been nice. Maybe Google is saving this for a higher-end Chromecast or proper set-top box. Who knows.

You can still cast content directly from another device to the Chromecast with Google TV. But if you're like me, the Google TV interface is going to mean a lot less of that.

The new Chromecast is made for video content first. You can install some basic games like Pac-Man 256 and play them with the remote. But more advanced Android-based games like first-person shooter Dead Trigger 2 will require a gamepad sold separately. I also saw the RetroArch emulator featured in the apps section.

As for Stadia support… that’s not coming until the first half of 2021. Until then, Stadia only works with the Chromecast Ultra. While the power adapter included with the Chromecast with Google TV doesn’t have a built-in ethernet port like the one that the Ultra comes with, you can connect certain USB-C hubs and adapters to the Chromecast with Google TV’s USB-C port so long as it allows passthrough for power. A power adapter with an ethernet port will be sold separately for $20.

There’s very little to dislike about the new Chromecast with Google TV. It’s a dead simple product with a simple interface that just works. Finally, Google has a proper competitor to Amazon’s Fire TV Sticks that come with Alexa remotes. In fact, I prefer it more than Amazon’s HDMI stick.

The Chromecast with Google TV isn’t replacing the regular Chromecast. Google will continue the $30version. Here’s how the new Chromecast slots in:

The $70 Chromecast Ultra is being phased out. It's sold out from Google since the Chromecast with Google TV does everything it does. The only way to get an Ultra now is with the Stadia Premiere Edition.

The regular Chromecast is good enough for most people, but the new one is better in every way thanks to the handy remote and Google TV. You could pay more for a set-top box like the Apple TV or a Roku whatever-version-it's-now-up-to, but why should you when the Chromecast with Google TV is only 50 bucks?