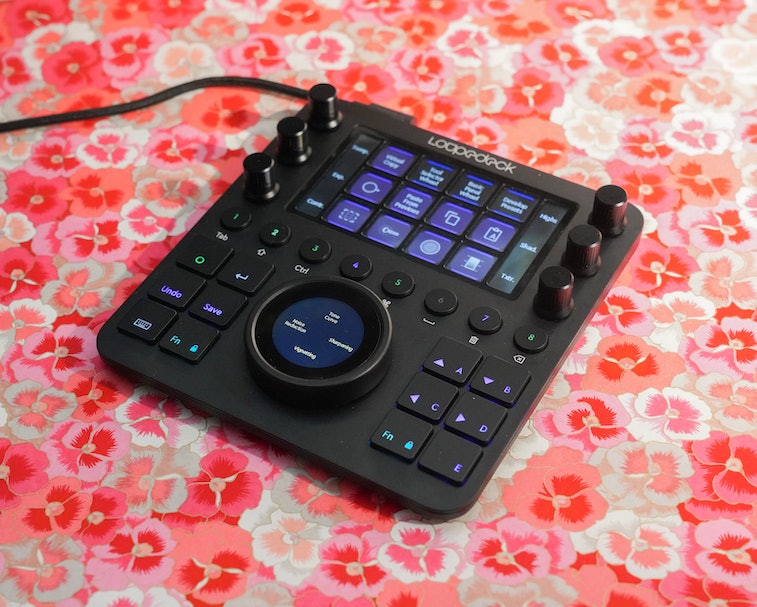 With nowhere to go and social gatherings whittled down to mostly my family, I spent a good chunk of 2020 looking through old photos to cure the blues.

I take an obscene amount of photos and videos. My Google Photos has over 300,000 photos and videos and my local hard drives have accumulated as many over the last decade. This year, I finally decided to stop putting off the herculean task of sorting and editing my favorites.

Like many, my problem is twofold: I need to edit a ton of photos and quickly. I didn’t want to spend who knows how many years hunched over my iPhone or keyboard moving adjustment sliders. Thank god for the Loupedeck CT. It made editing easier and faster.

Earlier this year, I wrote about Palette, modular controller blocks that I programmed with macros shortcuts for editing photos in Photoshop and Lightroom. It works, but the hardware can sometimes be janky. Not to mention, it’s been replaced with a newer and better Creative Console system.

The Loupedeck CT is like that, only a million times better. It’s a superior editing console in every way and not just for editing content (more on that in a bit.) Let me start with the hardware itself. The Palette is a modular system allowing for flexible configurations for different applications, whereas the Loupedeck is not. That’s not necessarily a bad thing. While I like playing Tetris with the Palette, the magnetic contacts frequently disconnect for some inexplicable reason or other. On the other hand, the Palette is a single panel with far more knobs, fixed buttons, and programmable buttons.

Editing photos and videos will never be the same with a Loupedeck CT.

Laid out on the gently angled controller, you get six knobs / dials that sandwich two long capacitive touchscreens and a grid of 4 x 3 capacitive buttons. Each of these buttons can display a different shortcut function; the knobs themselves rotate 180 degrees and can be pressed. Then you’ve got the other bottom half that comes with more buttons and a giant rotatable wheel with a circular screen that can support even more functions. I’m not going to get into the details of every single one of these buttons and what they do because they change based on the app you’re using, but just know that you’re getting a ton of programmable keys.

For my purposes, I primarily use the Loupedeck CT for editing photos in Lightroom Classic (note: it doesn’t support Lightroom CC) and Photoshop, and for editing videos in Final Cut Pro on a Mac and it’s an absolute game changer. With a few quick twists, I’ve been able to correct exposure, restore lost highlights, adjust white balance, on thousands of photos that I, honestly, forgot all about.

Let me be 100 percent honest: you’re not going to become an editing master overnight just by buying the Loupedeck CT. It took me weeks to train my muscle memory to use the Loupedeck CT at a respectable speed. Even now, many months later, I’m still not super fast. I’m okay with that because I’ve made using the Loupedeck CT a fun and relaxing editing experience rather than work. I like to put on my noise-cancelling headphones with a bitchin’ playlist and pretend I’m a DJ. Only instead of dropping beats, I’m salvaging photos. Sometimes, I’ll have a beer while “mixing” my photos and get really in the zone. You laugh, but I’m serious when I say you can actually enjoy editing photos.

Sometimes, I’ll have a beer while “mixing” my photos and really get in the zone.

The other thing I really like about the Loupedeck is that it’s helped me discover a bunch of new editing features I never would have found buried inside of an app’s menu. The capacitive buttons have really helped surface a lot of, say, Photoshop’s more advanced features. This is great for editing hacks like myself who learned how to edit from the internet’s early days and don't have any professional proficiency.

The Loupedeck CT is so much more than just an editing console. In addition to support for Adobe staples like Lightroom, Photoshop, and Premiere Pro, it’s also got shortcuts for bouncing around your desktop, support for Ableton Live 10, Capture One Pro, and even streaming apps like OBS Studio, Twitch, and more. Once you’ve nailed down the basics and feel comfortable with operation, you can start creating custom profiles for your own apps. Do whatever you want!

I haven’t quite made my way through my entire collection of photos yet. I’m about a third through my Google Photos collection (you can download the whole thing, but sorting is on you), but it’s a good start considering I never even bothered for years. I already have a keyboard and could have committed to editing, but using a mouse and moving sliders left and right over and over on thousands of photos gets tiring fast. At least with the Loupedeck CT’s knobs I can use two hands to make adjustments.

There’s no way to sugarcoat the Loupedeck CT’s price, though. $550 is expensive in any currency. My advice: only get one if you can get a lot of value out of it. If you use it to edit photos and videos, you’re gonna get your money’s worth in no time. If the price is still a big no, I have some good news: there’s a cheaper version called the Loupedeck Live that’s only $270. It’s about half the size and has fewer buttons, but the use case is the same. To be truthful, I could suffice with the Live. The CT often feels like overkill for my purposes. Not to mention it takes up more desk space.

Whether a Loupedeck is right for you or not, there's no better time to edit your photos. This time next year, everyone might be vaccinated and life will start to return to some normalcy, and you'll never get around to doing it. Might as well take advantage of this "lost" year.