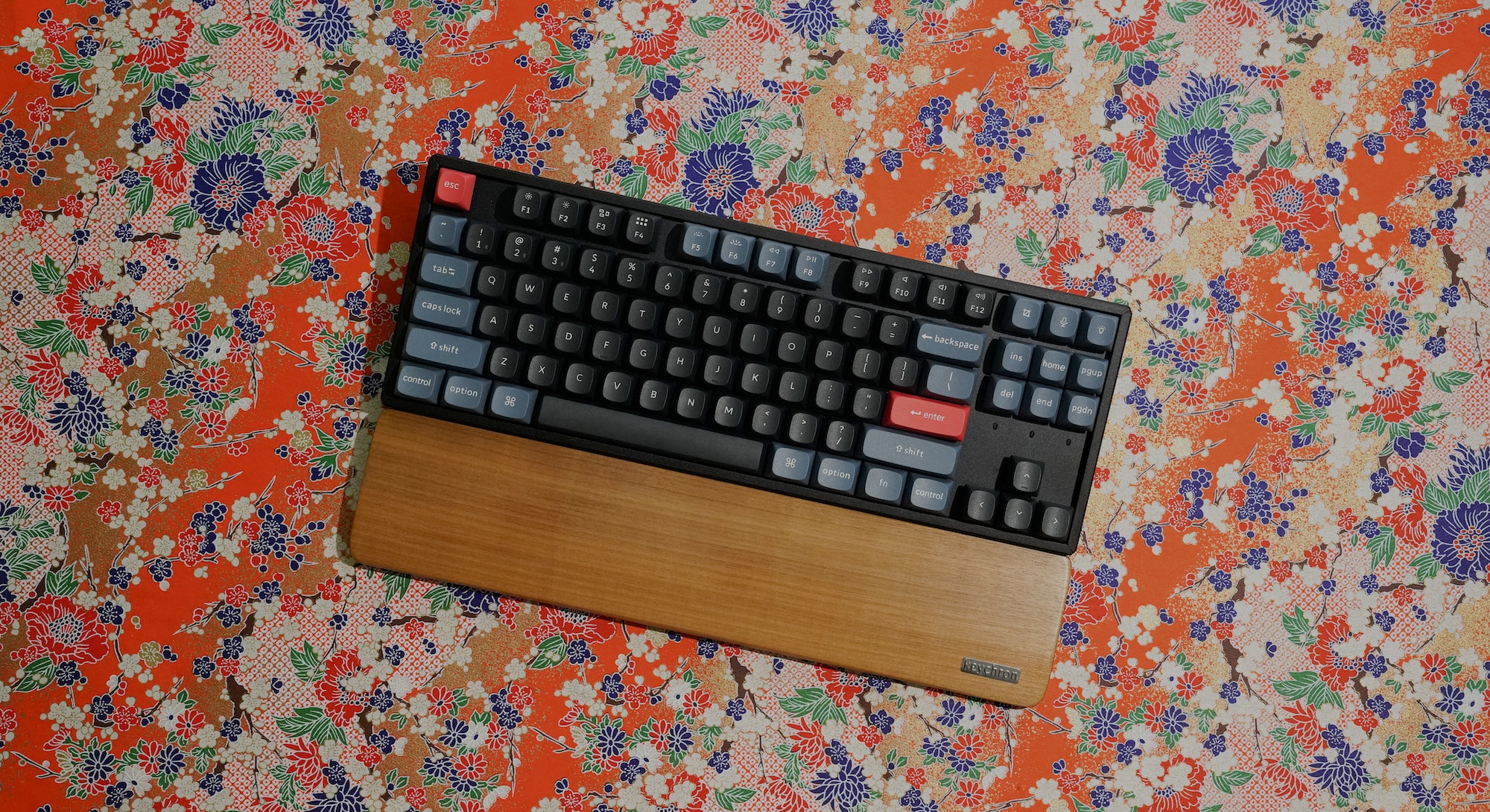 Mechanical keyboard mania is not going away. Keychron is leaning into everyone's latest obsessive hobby with the wireless K8 Pro, an upgraded version of the K8 released in 2020.

Starting at $79 (barebones) or $99 (fully assembled), the K8 Pro is a wireless 80 percent Tenkeyless (TKL) mechanical keyboard with hot-swappable switches that works with Mac, Windows, and any other Bluetooth-compatible mobile devices running Android.

The main upgrades in the K8 Pro over the K8 include sound-absorbing foam, a silicone pad in the base, and screw-in stabilizers for a better typing feel and sound. The keycaps on the fully assembled K8 Pro are also double shot PBT instead of the ABS on the K8; they're more tactile and the legends won't fade as quickly. And lastly, the K8 Pro also supports customization using open-source keyboard configuration software QMK and VIA. Keychron COO Paul Tan says the K8 Pro is one of the first stock keyboards to support VIA.

Keychron sent me a K8 Pro to test for the past few weeks and for the price, it's a solid sub-$100 wireless TKL keyboard. It's got a few quirks that made me miss the Q2, but that's also a more expensive wired mechanical keyboard (starting at $149 barebones, $159 barebones with knob, and $169 fully assembled) and it's only a 65 percent layout. The wired Q1 is a 75 percent layout and starts at $159 (starting at $139 barebones and $159 fully assembled).

If you're a Mac user just getting started with mechanical keyboards or want one that's affordable to replace Apple's flat Magic Keyboard, the K8 Pro is a good one to begin your journey with.

The Keychron K8 Pro wireless 80% Tenkeyless mechanical keyboard for Mac, Windows, and Android is a nice upgrade over the basic K8.

As I said in my Keychron Q2 review, I prefer full-size keyboards like the ROG Strix Flare II Animate or MSI GK71 Sonic mainly because of my workflow. I've adjusted to the Q2's 65 percent layout just because it's so nice to type on and it sounds terrific straight out of the box without any modifications.

The K8 Pro's 80 percent TKL layout is a good middle ground between the Q2/Q1 and a full-size keyboard. It's got a row of function keys with Mac-specific hotkeys/media controls. I especially found the screenshot/print screen button useful for capturing screens during Apple's Peek Performance event where it announced the iPhone SE 3, green iPhone 13s, iPad Air 5, Mac Studio, and Studio Display.

My review unit is the aluminum version which has more heft and sits more firmly on desk surfaces, but it costs extra ($109 fully assembled). Keychron sells plastic versions with white backlighting ($89) or RGB backlighting ($99). The weight difference between the plastic and aluminum panel enclosure is 4.8 ounces (136 grams). Get a plastic one if you want to save a few bucks; it's not like you're touching the sides often.

Fully assembled, Keychron offers the K8 Pro with three switch choices: pre-lubed Gateron G Pro mechanical red, blue, and brown. These are the same switches available for the Q2, for which I tested the reds and blues. This time, I've been trying the Gateron G Pro browns on the K8 Pro. They're not as quiet as the reds or clicky as the blues, but they are very tactile. Very thock-y when you press each key. Even pre-lubed the switches seem to require more pressure than brown switches on other mechanical keyboards. Not my personal preference for switches, but that's the beauty of a hot-swappable keyboard — you can change them out and tune them however you want. Keychron has a nice typing test sound video showing the difference between the three switch types.

The double shot PBT keycaps included on my K8 Pro review unit are OBS (rounded corners) and come in a similar (though not identical) color scheme to the Q2. The slightly lower function row is somewhat annoying (look, I don't have freakishly long fingers or anything) and I had more than a few mis-presses reaching over the number row.

I was able to maintain a Bluetooth 5.1 connection across the room, 20-feet away from my computer. The only downside to the K8 Pro's wireless connection is the response time/polling rate. There’s a massive difference (1,000Hz wired vs. 90Hz wireless) and you can really feel and see the latency when typing. In wireless mode, the K8 Pro is unsuitable for any real gaming.

Opening the K8 Pro is pretty easy. All of the tools you need are included, including an Allen/hex key and a small screwdriver. Four screws on the sides and the aluminum panels slide right off. Then you just gotta remove the keys with the keycap puller and remove 10 screws to get to the switches and board.

Supporting QMK and VIA open-source software is one of Keychron's strengths. There's little here for me to say except that it works and it's very welcome if you like messing with a keyboard not just in hardware. It's also good for troubleshooting the K8 Pro itself. My review unit shipped with a busted E key. Cracking open VIA confirmed the issue and a few seconds later, switch removed, I discovered the pin was bent. Plus, creating custom keys on a mechanical keyboard is half the fun of owning one.

The customizable RGB with 19 types of backlight options is a bit overkill. I'm an RGB on/off guy so the options and south-facing RGBs are lost on me. But if you're an RGB person, the K8 Pro's got plenty of them.

I like the dual-level adjustable feet; they're a good way to angle the tall keyboard. I do wish the left side-mounted USB-C port wasn't so recessed. Keychron includes a thick, braided L-shaped USB-C-to-USB-A plug but I was shocked to learn the USB-C cable that comes with the Q2 doesn't fit into the K8 Pro. Many of my USB-C cables I use for charging phones and tablets didn't fit, either.

This recessed USB-C port might be problematic if you misplace the K8 Pro’s cable and you can't find it when you need to charge up the keyboard. Which by the way comes with a 4,000 mAh battery. It's got the same capacity as the K8, but lasts longer: up to 300 hours (backlight off) or 100 hours (RGB on) according to Keychron's lab testing. The K8 only lasts up to 240 hours and up to 68 hours in the same two respective tests.

When I tested the Q2, Keychron sent its resin wrist rest, and this time they paired the K8 Pro with its wooden version. The length is the same as the K8 Pro, but the height is about a quarter of an inch shorter. I know the palm wrest needs to accommodate a variety of Keychron keyboards, but the shortness seems to be a recurrent compromise many reviewers want addressed. I can confirm the wooden wrist rest is indeed the nicer option with no fingerprint pickup and it doesn't stick to your skin if your hands get sweaty.

As a successor to the K8, Keychron has added quite a bit under the hood to the K8 Pro. Does it deserve the "Pro" name? Not really, but so many products now overuse "Pro" that you should basically ignore it. The upgrades in the K8 Pro — the more robust build, typing feel, sound absorption, and customization using QMK and VIA — do feel enough for a sub-$100 wireless TKL board.

Keychron ships many models of mechanical keyboards and often. There are plenty of better wireless (and wired TKL options like the Razer Huntsman V2 TKL) that cost more, but if you want a simple hot-swappable one that you can also tinker with in hardware and software, the K8 Pro is decent and really affordable. The minor quirks bugged me personally, but you might be more forgiving if you're just dipping your toes into the mechanical keyboard world.