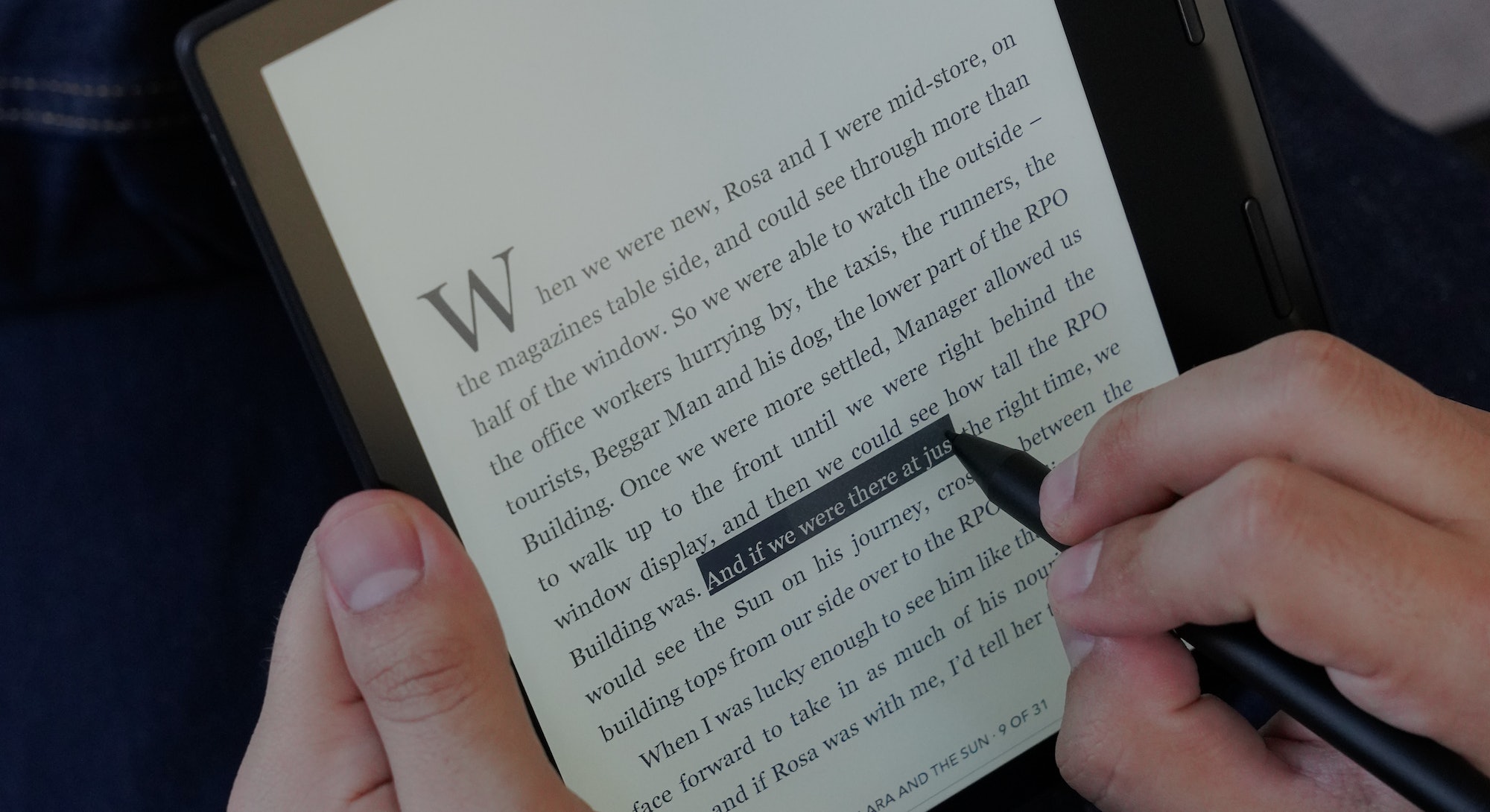 The latest addition to the Kobo family, the Sage, is not available in a shade of muted green reminiscent of its namesake, the leathery Thanksgiving herb. There is an option to transform your e-reader into a green-hued device, if you so desire — in the form of one of Kobo’s signature SleepCovers — but it’ll cost you an extra $50 to do so.

This is the Sage’s general vibe. It’s meant to be a slightly more luxurious option than the new Libra 2, and in many ways, it lives up to that potential. But you’re going to pay for the extras — every single one of them.

Newcomers to the Kobo family of e-readers are now faced with five main device choices, ranging in price from $100 to $400. The Nia sits at the lowest end of this spectrum, with a smaller, lower-resolution screen and chunkier body; the Elipsa, with its massive screen and included stylus, occupies the far end of the lineup. The Libra 2 fits squarely in the middle of this equation and is genuinely mid-range in all the right ways.

The $260 Sage’s place in this lineup is less obvious at first glance. It shares much more of its appearance with the Libra 2, including its physical page-turn buttons and overall form factor. But its more luxurious features are reminiscent instead of the Elipsa. (Hence the $80 extra you’ll pay for the Sage over the Libra 2. Whether or not that $80 is worth it, I’ll get to in more detail later.)

The Kobo Sage is a terrific e-reader for ebooks, but Kobo's other offerings could save you some cash or come with more features that justify the premium.

Those looking for a clean, simple e-reading experience will be happy to find that the Sage is, in typical Kobo fashion, built for exactly that. Like the Libra 2, the Sage’s hardware has been designed to make reading on a hunk of plastic and metal less harsh. Everything about it is soft and well-balanced.

The best parts of the Libra 2’s design have made their way to the Sage, like that strange, asymmetrical shape that makes gripping it with one hand genuinely easy. The physical page-turn buttons are here, too, which is much appreciated in my book. On the Sage, they’re a little less clicky than the Libra 2 and placed just a bit further apart. I wouldn’t say those changes have much (if any) effect on the reading experience.

The more notable hardware difference here is the screen. It’s a full inch larger on the diagonal than the E Ink Carta 1200 used in the Libra 2, albeit with the same 300 PPI. The Sage’s screen is also flush with its bezels rather than slightly set back like the Libra’s. This does change the reading experience more than I would’ve expected.

As with the Kindle Paperwhite, I’ve found the flush screen is significantly more prone to collecting fingerprints. Not to quite the same extent, but they do stick around. The actual impact these fingerprints have on your reading experience will vary greatly depending on how much you touch the screen (versus using the physical buttons or the stylus) and the lighting conditions you read in most often. The Sage’s screen is generally very low-glare, but that can shift dramatically when fingerprints are involved. Here’s what I’ll say: clean the screen often, especially if you’ll be reading in direct sunlight. Thank me later.

The fully flush screen isn’t just about aesthetics, though. It also enables the Sage’s stylus support, which is perhaps its most stand-out addition. That’s the same stylus Kobo introduced for the first time with the Elipsa. It enables a whole host of new functionalities that the Libra 2 just isn’t capable of producing. You can underline text while reading books or PDFs, for example, as well as create entire notebooks that sync up with Dropbox. Being able to navigate with the stylus feels intuitive, too.

This compatibility could be a game-changer. I found it to be so on Kobo’s Elipsa. But for the most part I found myself not really enjoying the stylus functionality on the Sage. I’ve left it rolling across the coffee table more often than I’ve had it in my hand at the ready to take notes.

There are a few reasons why I think the stylus doesn’t really work here, but the most outstanding is the screen size. Though the Sage’s screen is an inch larger than the Libra 2’s, it’s still relatively small. In ebooks, this means there’s really not much space for hand-written marginalia; underlining works just fine no matter the screen size, but it’s much easier to just highlight. The notebook feature, which is really quite feature-packed for an e-reader, can feel cramped. The screen just isn’t large enough to really accommodate full note-taking sessions.

Another thing about the stylus: there’s nowhere to put it. This is a quality-of-life detail that really could’ve changed the entire experience of using the stylus. It’s magnetic, which in theory could help it stick to some part of the device — perhaps to one side, like on the Onyx Boox Nova Air — but instead it only sticks to the screen, and even then only in a weak manner. You can’t exactly rest it there while you’re reading.

Even the $50 SleepCover (that’s $10 more than the SleepCover for the Libra 2, if you’re keeping track at home) doesn’t have a space for the stylus. This, to me, seems like a pretty big missed opportunity. Would a stylus holder have added an inch or so of bulk? Yes. But it also would’ve allowed users to carry around the stylus without just throwing it in their bags and hoping they can find it later — so they could put the stylus down while immersed in a book and not worry about it rolling off the table and across the room.

The only real reason to choose the Sage over the Libra 2 is the stylus support.

When the Kobo Stylus was first introduced earlier this year with the Elipsa, I praised its intimate integration with the e-reader. In the case of the Sage, the physicality of the stylus feels much more like an afterthought. This is unfortunate, given that stylus compatibility is also one of the Sage’s biggest upgrades over the Libra 2.

Which brings me to another problem with the stylus: it’s not included with your purchase of the Sage. It’s another $40 on top of the $260 you’ll pay for the e-reader itself. The Sage is only $80 more than the Libra 2, but once you add the stylus into the mix — which is certainly what will draw many to the Sage over the Libra — it’s actually $120 more. If you add a SleepCover to that cart, you’re looking at about $350 to unlock the Sage’s full potential. For just $50 more you could buy the Elipsa, which is packaged with a stylus and SleepCover. It’s also a much better size for actually using the stylus on a regular basis.

These (admittedly somewhat minor) annoyances make the Sage’s place in the current Kobo lineup a bit nebulous. It’s the Libra 2 with some extras (or the Elipsa with some removed), but those extras feel half-implemented at times, and to use them fully means paying significantly more than the base price.

This is made all the more vexing by the fact that, by all other measures, the Sage is a very good e-reader. I’ve really enjoyed my time reading with it. It is in many ways the best parts of the Elipsa in a more manageable form factor. The screen is responsive and easy to stare at for long periods of time. Audiobooks work great over Bluetooth, though as with the Libra 2 you definitely won’t get the estimated “weeks” of battery life if you partake.

The Sage is a stellar e-reader. The problem is that Kobo’s Libra 2 is nearly as good.

And generally the stylus features do work quite well, if you don’t mind feeling cramped from time to time. The Advanced Notebook option adds some handy functionality like the ability to convert handwritten notes into text. Doing so actually ended up being far more accurate than I assumed it would be, especially with the ability to make quick corrections using touch gestures. Advanced Notebooks also allow you to create diagrams, edit formatting, and even write and solve for (some) math equations. All these notes can then be exported to Dropbox and viewed from any of your other internet-connected devices.

The Sage is a stellar e-reader. The problem, as I see it, is that Kobo’s Libra 2 is nearly as good. The only real reason to choose the Sage over the Libra 2 is the stylus support — but that also means shelling out more cash on top of the base price and dealing with never having a place to set it down. As the newest addition to the Kobo lineup, the Sage really needed to distinguish itself from the Libra 2 and the Elipsa, but I worry it’s just a bit too similar to really find a foothold.