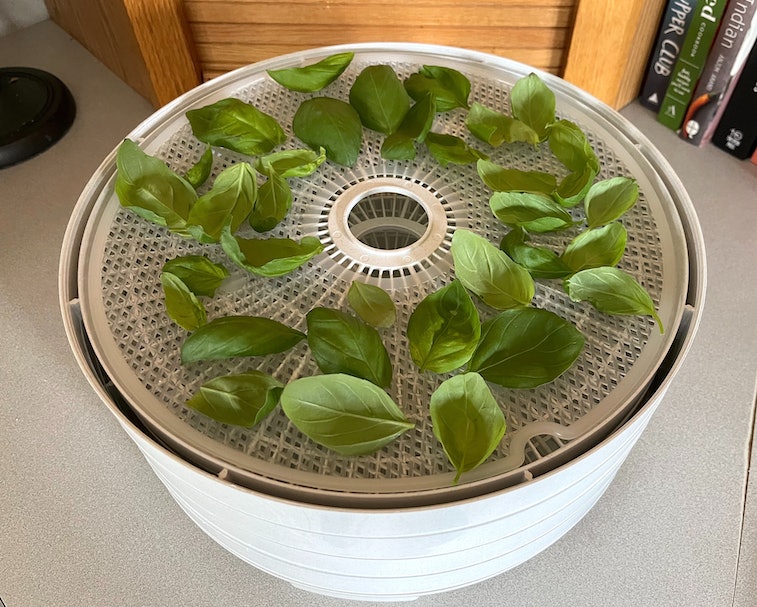 The state of things is pretty perturbing these days. This isn’t to say I think the sky is going to fall tomorrow, per se (I’ll grant it another couple of years or so), but I’m definitely not a fan of our species’ current trajectory. I can also say from firsthand experience that I am very much not a fan of our environment’s downward spiral. All told, I’ve started thinking that I should probably brush up on some apocalypse basics. I recently attempted my first pickling experiments to solid results, but there’s an even simpler sundries storage process that is (at least somewhat) less likely to result in bouts of botulism.

Enter: NESCO’s FD-75PR 5 Tray Food & Jerky Dehydrator — a perfect entry point for anyone hoping to try their hand at the dried food game. I picked up mine on a whim a few weeks back for about $80 while perusing Walmart, and it’s already changing the way I think about not just my kitchen, but food prep in general.

Being the Deadwood fanatic that I am, I obviously opted to jump straight into jerky-making upon bringing my dehydrator home. It’s hard to get much simpler than dehydrating meat — pick a lean cut, slice into strips, marinate for a while, then set ‘em and forget ‘em in the NESCO. My particular stackable model allows a decent amount of food yield for the casual hobbyist; in this case, a one-pound package of precut stir-fry steak easily fit in the gadget. After that, you just set the temperature and wait... and wait... and wait some more...

But that’s part of the beauty of a dehydrator — it’s a glorified heat lamp, so you can leave it running overnight without fear of burning your food or, y’know, setting your house on fire. What’s the worst that’ll happen? Your dried food is too... dry? We should all probably practice better patience in this modern age of instant results and quick fixes, right?

Anyway, my first batch of jerky turned out pretty tasty, although as a friend pointed out, I’ll need to better trim off any visible fat next time around to vastly increase its shelf life potential. Not that it had much of a potential to begin with... the bag’s contents were gone within two days.

From there, I moved on to dried fruit, which proved a much less messy, somehow even simpler endeavor. After all, you don’t need to worry about fat remainders spoiling, say, dried pears or strawberries (not that these can’t go bad, but it appears to be much harder to accomplish). Slice up your fruits of choice, throw ‘em on the dehydrator racks, and get to waiting yet again.

Before the dehydrator, I was one of those people who bought fresh produce at grocery stores because I liked the idea of eating raw fruits and vegetables more than I actually manage to do so. Of course, this often resulted in a guilt-inducing amount of food waste every few weeks as I purged my fridge’s contents of moldy or just plain sad-looking items.

I went to bed and woke up with a fresh batch of apple chips.

That era is firmly in the past with a dehydrator. Last week, I discovered some additional apples that I forgot about in the fridge one evening. They were still fine, albeit close to being on their way out. Instead of lying to myself that I’d get around to eating four apples over the next couple of days, I spent about 10 minutes slicing them up and loading them into the NESCO. I went to bed and woke up with a fresh batch of apple chips.

The same sentiment goes for herbs. I am an idealistic gardener at best — most of my projects don’t fizzle outright, although I don’t make nearly as much use out of my vegetables and peppers as I should. As I write this, some basil and lemon balm leaves are slowly losing their moisture at 95-degrees Fahrenheit. Of course, your yields are comically low for dried herbs compared to pretty much anything else you’d put in a dehydrator, but it still allows me to keep and utilize produce that would have otherwise fallen by the wayside.

I don’t expect my dehydrator to save my life in our fast-approaching, post-oil Mad Max: Fury Road wasteland. I doubt I’ll truly turn into one of those guys with shelves full of canned food and vacuum-sealed jerky (although you never know). But in the meantime, buying a dehydrator has made me feel a little better about my own daily choices as a consumer, and actually encouraged me to eat a bit healthier in the process.

If the day does indeed come when we’re bartering for potable water, hopefully, I’ll have enough of these dried lemon balm leaves to make a refreshing herbal tea by then.

At barely $100, NESCO's entry level dehydrator is a great way to test out your prepper skills.