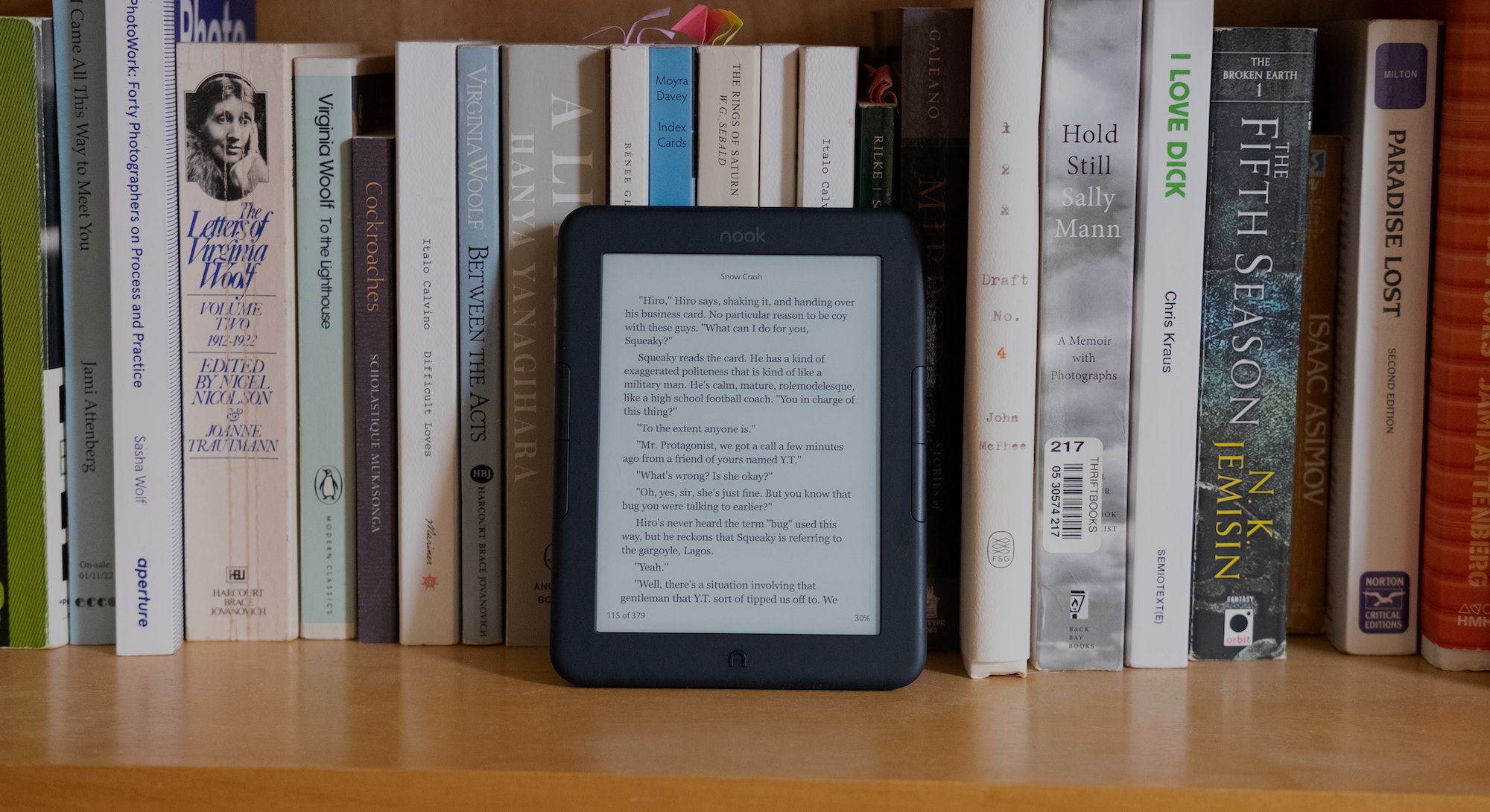 I spent many collective hours of my teenage years wandering the aisles of Barnes & Noble. When Nook displays began popping up at each store (around 2010) I always took a few minutes of my trips to try the nascent e-reader out. The E Ink screen was nothing short of revolutionary to me.

It came as something of a surprise to me when, returning home from college one summer, I noticed the displays had disappeared. By then e-readers were more popular than ever. Where had the noble Nook gone?

I know now, with the benefit of more market knowledge and hindsight, that it was around this time that Barnes & Noble pivoted away from creating proprietary E Ink devices, switching instead to Samsung-made tablet hybrids. The Nook, I know now — like most of the established bookstore industry — couldn’t keep up with Amazon.

The switch to tablet-style e-readers never quite worked out, either. As I found out when reviewing Lenovo’s Nook 10-inch HD Tablet earlier this year, a dedicated reading app does not an e-reader make.

The new Nook GlowLight 4 is, to my great pleasure, nothing like Lenovo’s Nook. Nor is it at all like Samsung’s Nooks. It is, instead, a return to the Nook I held gingerly at Barnes & Noble all those years ago. That return is the right direction for the brand, though sometimes it does feel like the Nook GlowLight 4 was scooped right out of 2014.

The Nook GlowLight 4 is very much an e-reader. Gone is the tablet-like LCD screen, replaced by a 6-inch 300 DPI screen — E Ink, this time around — encased in relatively chunky matte black bezels. As the name suggests, the GlowLight 4 is, indeed, backlit by a warm, glowing light. Two physical page-turn buttons straddle the screen on either side.

It’s not the sturdiest e-reader hardware I’ve held in my hands. Yes, most e-readers use plastic shells, but something about the smaller size and general lack of heft definitely makes it feel less solid than, say, a Kindle or a Kobo. Not toy-like, exactly, but nearing it.

Otherwise, though, I really do like the choices Barnes & Noble has made here. The physical buttons are solid and clicky and generally quite responsive. Keeping the doubled pairs of buttons at first seemed a strange choice to me (I never found myself wishing for more than one pair), but in practice the extra set is very useful. Switching from a right-hand-only grip to one in my left hand is seamless because of those extra buttons.

The home button — a Nook logo — is similarly convenient. Rather than fumbling around on the touchscreen to return to the home screen, you can just navigate there with one click. Once again I thought this unnecessary at first; once again it proved itself to be much more useful than I imagined.

The reading experience and, more generally, the Nook software, is vastly unchanged from previous models. This is a good thing, for the most part. The Nook’s proprietary software is quite easy to navigate, even on the GlowLight 4’s smaller screen; I’ve never found myself confused about where to go next or how to find a menu. It’s clear Barnes & Noble has experience with making e-reader software; rather than continuous scrolling, for example — which doesn’t usually translate well to E Ink — menus are split into separate screens. You can page through them with the physical buttons or with a tap.

Unfortunately this software ease does not extend to every corner of the GlowLight 4. On the whole, navigating is seamless, yes, but frequent bugs and crashes plague the operating system, at times making the device feel almost useless. Software updates could remedy some of these problems, but when that might happen is unknowable. We can’t bank on fixes becoming available at all, really. Out of the box, at least, the GlowLight 4 has some pretty significant kinks to work out.

On the bright side, most of these random issues seem to happen while browsing the device. Actually reading a book on the GlowLight 4 is, for the most part, unproblematic. I’d expected the screen to feel dinkier, given how very small it is (there’s less screen real estate here than on the iPhone 13 Pro Max). It’s plenty of space for reading a novel, though. The refresh rate is on par with offerings from Amazon and Kobo, as is the resolution. Really the only difference is that you end up turning pages more often. It’s the difference between reading a hardcover and a mass-market paperback.

As any connoisseur of mass-market paperbacks will know, though, they’re not exactly the highest-quality reading experience. Maybe the font size is significantly smaller; perhaps the cheap binding makes it more difficult to read text near the middle margins. This part of the metaphor carries over into the GlowLight 4, too. Reading on the device can be seamless — but only once you’ve figured out a font size that won’t give you a headache. For some reason, the difference between one size and the next is more of a jump than a hop, especially when reading books purchased from sources other than Barnes & Noble. In the space of one notch, the font will go from unreadable-even-when-squinting to so-huge-only-three-words-fit-per-line. At times it feels genuinely impossible to find anything near a happy medium.

Nook’s going to really need to step up its game if it wants to find a permanent spot in ebook-lovers’ hearts once again.

The thing about mass-market paperbacks is you usually pay a fair amount less than the book’s original retail price, as a trade-off for buying an item crafted with the intention of being less nice. The GlowLight 4 is not less expensive than others in its class. A 2021 Kindle Paperwhite retails for just $10 more than the GlowLight 4 — and the Paperwhite is actually less expensive if you opt into Amazon’s ad program. For just $20 more, you can pick up Kobo’s Libra 2. Both of these industry-leading devices have larger screens and don’t force you into choosing from a set of borderline-unreadable fonts.

The most frustrating part about the GlowLight 4 reading experience is that it’s so, so close to being on par with Kindles and Kobos. It is a marked improvement over the Nook 10-inch HD Tablet, which Lenovo made to be more of a budget tablet than an actual reading device. In many ways it does remind me of the Nook of yore — the one I yearned over in the Barnes & Noble entryway. And maybe that’s the problem, really. It’s almost as if Barnes & Noble took tech from half a decade ago, polished it up a bit, and sent it out into the world. The GlowLight 4 is almost too reminiscent of that mid-2010s e-reader ideal.

The GlowLight 4’s issues aren’t problematic enough to make it the kind of device I’d explicitly warn you against buying. In fact, I’d say it will get the job done just fine for many people. There are some modern perks hidden beneath this unassuming plastic case. The battery life is better than any older Nooks (around a month, according to Barnes & Noble); USB-C makes charging a breeze. Features like quick-flip (holding the page-turn button flips through the pages rapidly) and chapter-jump (double-click the physical button to skip to the next chapter) make navigating through actual books even easier than with a Kindle or Kobo. These quality-of-life improvements balance out other minor annoyances — like the fact that it takes approximately four taps just to highlight a passage.

There are a few other quirks that might give a potential Nook-buyer pause. The GlowLight 4 does not have an IPX8 waterproof rating. It’s not waterproof at all, actually. Drop this thing in the pool or the bath and it’s toast. It’s entirely incapable of reading MOBI files, which happens to be one of the most popular ebook file formats available today. Someone with a large collection of MOBI ebooks would need to convert them to EPUB before transferring them to the Nook. A lengthy project that could’ve been avoided by adding MOBI support. And stylus support isn’t even a conversation here.

In announcing the GlowLight 4, Barnes & Noble said it hopes the device will help “reinvigorate” the Nook brand. The GlowLight 4 does put the company in the right direction to make that happen. But Nook’s going to really need to step up its game if it wants to find a permanent spot in ebook-lovers’ hearts once again. Otherwise, the Nook brand, and Barnes & Noble with it, is doomed to live in 2014 forever.