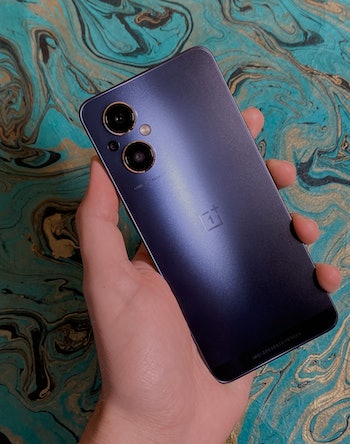 The OnePlus Nord N20 5G is a gamble against Samsung.

Samsung dominates the smartphone space on the high-end. If you're looking to drop $999 or more on an Android phone, there's a pretty good chance it's a Galaxy device. And Samsung's been quickly trying to fill the gaps on the low-end as well.

At $282, with a fairly compelling collection of features (5G support and an OLED screen), the Nord N20 5G seems like OnePlus’ (and I imagine, Oppo's) competitor to the Galaxy A32 5G's of the world. The Nord N20's biggest knock right now is that it's only available on T-Mobile in the U.S. If you're on another carrier, you're out of luck.

A budget phone worth considering from OnePlus, with an OLED screen and an under-display fingerprint reader.

Where the rest of the industry has gone, so goes the Nord N20 5G. Curved backs and screens are out, flatness (with some rounded corners) is in.

In terms of design and general look, I can't help but love the Nord N20 5G. The back: It’s flat, except for the cameras (a 64-megapixel main, two-megapixel macro, and two-megapixel monochrome lens) and flash. The sides: They’re flat, with a power button on one side, volume rockers on the other, and a 3.5mm headphone jack (!) and USB-C charging port side-by-side on the bottom.

The front very tall 6.43-inch FHD+ AMOLED screen: It’s flat too, and strangely, really reminds me of the Pixel 2 XL. At a glance, the Nord N20 5G has fairly small bezels, a tiny hole-punch selfie camera (16-megapixel) in the top left corner, and a charming little chin along the bottom. I think as a society we’ve moved past the need or desire for smartphone chins (mainly because the classic Android buttons are a thing of the past) but I don’t mind it on the Nord N20 5G, it makes the big screen a little more manageable to hold, though not easier to use.

I can't say I feel the same way about the blue metallic finish (“Blue Smoke”) OnePlus chose for the Nord N20 5G, mainly because it does show smudges and fingerprints in the wrong light. It’s one aesthetic fault in what I otherwise find to be a very pleasing wedge of a phone. And details like that are important when the main thing that might differentiate the Nord N20 5G from other similarly priced phones is looks, and whatever components companies decide to really spend on.

What did OnePlus spend money on?

Vibrant screen — Well, it seems like a few things. An AMOLED screen (2,040 x 1,080) for one, which is unusual at this price point and nice to have on the N20 5G. The display gets pretty bright — just on the edge of where I actually “feel it” while looking at it — and to my eye has a nice amount of contrast between blacks and everything else.

Where OnePlus skimped out was on the refresh rate. The company shared head of the launch of the new Nord that it would only have a 60Hz screen, a step down from the 90Hz display of the Nord 2. In my opinion, this was the correct decision. An AMOLED display is far more meaningful to me than a higher refresh rate. I know plenty of people will disagree, but I still think the average person isn’t as well read on the smooth animations of high-refresh rate screens as gadget heads.

Multi-day battery — The N20 5G’s battery is 4,500 mAh, and it performed very well in the brief amount of time I spent with the phone. Under $400, battery capacities can really vary depending on whether or not a phone maker wants to make it an above-the-line selling point (for comparison, Samsung’s A32 5G has a 5,000 mAh battery).

OnePlus does graciously pack in a pretty great 33W fast charging brick in the box, so topping up the battery isn’t much of a problem. The company’s claim is that 30 minutes of charging gets you “a day’s worth” of battery, and while I didn’t reproduce that exactly, going from basically empty (less than 10 percent) to fully charged took a little more than an hour.

My phone use really hasn’t been the same as when I was commuting via bus to work every day. Swapping in the Nord N20 5G for my daily personal smartphone use, streaming music and podcasts, and spending too much time anxiously switching between Slack and Twitter, it did easily last through a day and then some.

Out and about, doing anything on 5G seemed to be the biggest battery hog. The Nord N20 5G supports T-Mobile’s Ultra Capacity 5G, which is what it calls its 2.5GHz coverage. The company announced it covers 200 million people with Ultra Capacity 5G last year, and the only place I really had an issue was at home, which already had non-existent T-Mobile coverage.

Good-enough performance — Here’s maybe where you could quibble. The Snapdragon 695 5G is a little bit better than the MediaTek chips in similarly sub-$300 phones and really great for normal smartphone tasks. Including 6GB RAM also seems to do a lot to help carry the load. Where the Nord N20 5G stumbles is anytime you’re dealing with a lot of media at once, especially assets from big mobile games.

The Nord N20 5G lags by a second or two in apps like YouTube in comparison to the Pixel 6. But that’s pretty good all things considered. Genshin Impact took a while to load too, around 35 to 40 seconds, but that was also true on other flagship Android phones. The comparison becomes less favorable when you look at actual performance in-game, where the Nord N20 5G frequently stutters on anything other than low settings. It’s not terrible by any means, but it could become annoying over time.

The Nord N20 5G is running an OxygenOS skin of Android 11. With the beta version of Android 13 now available to the public, it’s a little disappointing that Android 12 didn’t ship on this phone by default. OnePlus is guaranteeing one major Android update and three years of security updates, but didn’t share when Android 12 would come to the Nord N20 5G.

OxygenOS remains a pretty hands-off skin of Google’s operating system; there aren’t many pre-installed apps from OnePlus partner T-Mobile, and OxygenOS’ blending with Oppo’s ColorOS was most noticeable to me in the Settings app and application icon treatment.

A word on the T-Mobile branding: There’s more of it than I was expecting. The most noticeable being a whole separate T-Mobile tab in the Discover feed to the left of the home screen. You can get rid of it by disabling the T-Mobile Play app and rebooting the phone, but it still feels a little icky.

The Nord N20 5G’s camera is fine. Compared to the more expensive Android phones I have on hand like the Pixel 6 and the Samsung Galaxy S22+, the window in which it takes a good photo is far slimmer, but gosh darn it’s trying!

Daytime shots, especially outside, seem to suit the N20 5G best. In general I’d say it prefers brightening things up, which makes some shots fairly washed out, but I was able to get alright pictures with some finagling.

Indoor pictures, and anything taken at night, were harder to make work. The Nord N20 5G offers a night mode, but I can't say it helps as much as the night modes on a flagship phones. Flash makes a difference too, but you just lose a lot of detail in the dark either way. And a fair amount of focus, there’s no optical image stabilization to save you here.

Maybe just don’t take portrait mode shots or selfies either. I’ve found them to be pretty lackluster in comparison to what you can get out of the Nord N20 5G’s main camera during the day.

As someone who’s never been a OnePlus fan, the Nord line, and particularly the Nord N20 5G, are interesting mainly in how they relate to other affordable phones. I really want the Nord N20 5G to succeed as an alternative in a space that’s quickly filling up with phones from Samsung. The competition is ultimately good for consumers.

There are certainly stumbles with the Nord N20 5G, and the days of feeling like you’re really getting away with having high-end features on a cheap Nord might just go away as every phone gets better. But I like the OnePlus Nord N20. The design, the price, and the quality features, like the screen and fingerprint reader, all stand out for the amount of money you're paying for it.

The competition is ultimately good for consumers.

Don’t by any means buy it for the camera, but for pretty much any other reason, the OnePlus Nord N20 is not as budget as it looks. The phone is a T-Mobile exclusive in the U.S. for now, but maybe someday OnePlus can get its phones on other carriers.