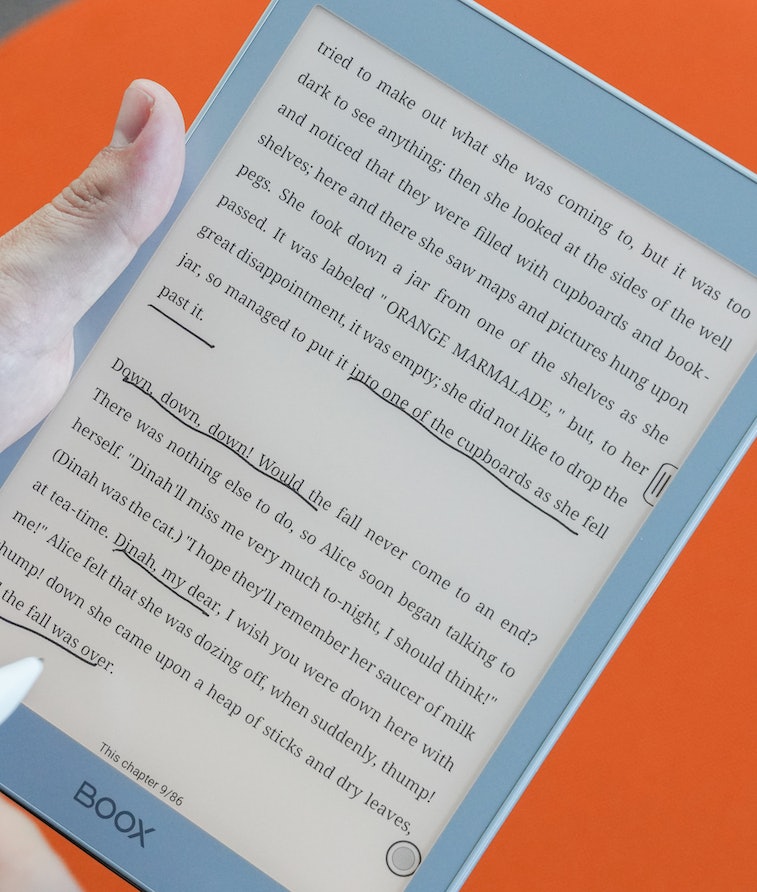 Every time you boot up Onyx’s Boox Nova Air, you’re presented with a wispy sketch of a conch shell and a tagline: Like a tablet, unlike any tablet. This is, indeed, a concise way to describe the Nova Air. Upon my ninth or tenth boot-up, the words began to feel like a warning.

The Nova Air isn’t just unlike any tablet; it’s also nothing like any e-reader I’ve ever used. The only real similarity between the Nova Air and something like a Kobo Libra 2 or a Kindle Paperwhite is the E Ink touch screen. They also have the baked-in ability to read ebooks.

Let’s start here. If you’re looking for a dedicated e-reader — a device to simply store and read books — the Nova Air isn’t for you. You can read ebooks on the Nova Air, yes, but it is capable of much more than just that. The $349 price tag reflects that.

Now, if you’re in search of a tablet that won’t strain your eyes when you use it for long periods of time? The Nova Air might be a great fit. Depending on what, exactly, you want to use it for, that is.

The Nova Air is described by Onyx as an e-reader, and upon first picking up the device, it feels like one, too. The E Ink screen is a dead giveaway, of course, but the device’s size is also more reminiscent of an e-reader than tablet. Its 7.8-inch screen makes it a bit heftier than some popular e-readers, though not by much.

This extra bulk doesn’t make the Nova Air any more difficult to hold than a more traditional e-reader. It’s the difference between reading a hardcover and a paperback. Both feel nice in the hand — one just takes a little more effort to hold.

You’re free to buy your ebooks anywhere... except the Kindle Store.

The only time I really found holding the Nova Air to be cumbersome was when I used the $60 magnetic case. The case’s mechanism is actually pretty fun to use; the Nova Air snaps into place using a small magnetic strip on the upper left side. But folding the case all the way back to read leaves you with an unseemly plastic bulge where your left hand rests, exactly where the case’s page-turn buttons are (more on that later). Reading on the Nova Air is a little different than what you might expect from an e-reader, starting as early as when you look for something to read. Unlike Kobo or Amazon, Onyx doesn’t operate its own ebook store. The “store” built into the Nova Air is actually a search engine for Project Gutenberg, a database full of digitized books in the public domain. That means you can download as many as you’d like without paying a cent. It also means you can’t find much written after 1925.

This will certainly be a limitation for some. A full on-device ebook store is one of the main reasons consumers choose to buy an e-reader. It’s expected as a built-in feature. Unless you’re only planning to read Shakespeare and Tolstoy, the Nova Air’s “store” won’t feel very convenient at all. That’s not to say it’s difficult to add newer books to the Nova Air. It’s pretty simple, really, but it does require more effort than Kindle fans will be used to.

Unfettered by a company store, you’re free to buy your ebooks anywhere. Well, anywhere except the Kindle Store; Amazon locks down those purchases so they can only be read on Kindles. Everything else is fair game, though. Buy from a site where you see a sale, buy them from ebooks.com, rent them from your local library — the sky’s the limit. You can either download them directly to the Nova Air through its built-in web browser or do so to your computer first and transfer them later.

Transferring books is actually the easiest on the Nova Air out of any e-reader I’ve tried. USB transfer works fine enough, but the real star of the show here is the e-reader’s push capabilities. By creating an Onyx account, you can log into push.boox.com and upload files you would like delivered to your Boox. This process takes all of a few seconds and is particularly useful when you can’t find your USB cable in the mess of your apartment.

Again, though, not all consumers will feel comfortable with this process. There’s a definite learning curve here, and not just with buying and transferring ebooks. The Nova Air’s operating system, a modified version of Android 10, fluctuates wildly between being intuitive and a sticky, unintelligible mess. The home screen is easy enough to navigate, for example, with a large, well-marked sidebar for each of the device’s main sectors.

Getting around the rest of the device, though… well, that’s a different story. Navigation symbols are often abstract — a circle, a square, a triangle — impossible to understand unless through trial and error. Even finding those buttons proved a struggle for the first few days I used the Nova Air, especially in fullscreen apps where the navigation bar is purposefully hidden. Just returning to the home screen sometimes takes three or four taps. This is, as you might imagine, frustrating. Did I mention that a manual is not included in the box, nor is it available online?

The reason for these navigational struggles became more apparent the longer I used the device. The Nova Air is just too complex for its own good. It wants to be a do-everything-however-you-want-it device, but its plethora of options is really its biggest weakness. This problem manifests itself everywhere from navigation to reading options, where so many customization options exist that playing around with them often leads to strange formatting issues.

Taking advantage of the device’s full range of features requires getting in your own way. One of the aspects that excited me most about the Nova Air — its ability to run full Android apps — ended up mostly being a letdown. Even simpler experiences like browsing a news site in the web browser are a struggle. Ghosting (after images left on the screen, a fairly common E Ink experience) often leaves web pages illegible, even on the fastest refresh settings. Videos will load like GIFs in slow motion set at 5 fps.

The Nova Air is just too complex for its own good.

This ended up being a common theme in my testing. The majority of apps I tried out just did not work well on the Nova Air. I was excited for the opportunity to install the Kobo and Amazon apps, each of which would theoretically open up the device to unique reading experiences and sync up to the ebook libraries I’ve built up over the years. But neither app had been optimized for an E Ink tablet like this, and they struggled accordingly, so much so that I wouldn’t recommend even downloading them.

This is where the Nova Air’s big dreams really hit a snag. Onyx has modified Android 10 to run well on an E Ink screen, and it really is quite smooth once you figure out the navigation. But the Android apps it runs are just plain old Android apps. They’ve been developed and tested on smartphones and tablets. They’re technically compatible with Onyx’s homebrewed operating system, but they’re certainly not optimized for it.

Thanks to the E Ink screen, the Nova Air’s 2,000 mAh battery provides significantly more screen time than your average tablet. It’ll last about two weeks of light use. The more you’re using those unoptimized apps, though, the charge drains faster. If you’re using the Nova Air for hours of web browsing at a time, for example, it won’t really feel like the E Ink screen is a boon to battery life anymore.

Not really a tablet

The Nova Air is a fine enough e-reader. This is how Onyx markets it, after all — as a reading device. Tapping to turn pages never feels arduous, and the upside of that intense customizability is that you can fine-tune your ebook’s formatting to fit just about any tastes. The device itself is well-balanced and not too heavy. I’ve never had any trouble reading for extended periods of time.

It’s even a passable note-taking device. The included stylus is incredibly responsive, though its lack of buttons really limits what you can do with it. (The Kobo Elipsa’s stylus, for example, uses two function buttons for highlighting, page-turning, and erasing.) Writing on the screen feels surprisingly paper-like, even if the screen is a little too small for serious note-taking sessions.

But this is not just an e-reader. Categorize it however you’d like, but the Nova Air’s expanded functionality and ability to run full apps really makes it more of a tablet than an e-reader. That’s why it’s $349 — you’re paying for the luxury of being able to check your email, read the news, and listen to music all on an E Ink screen. It would be well worth that price if those apps worked, but not many of them are even worth downloading. The Nova Air aims high with these tablet-like functions; in falling short of them, it flounders, more disappointment than it’s worth.