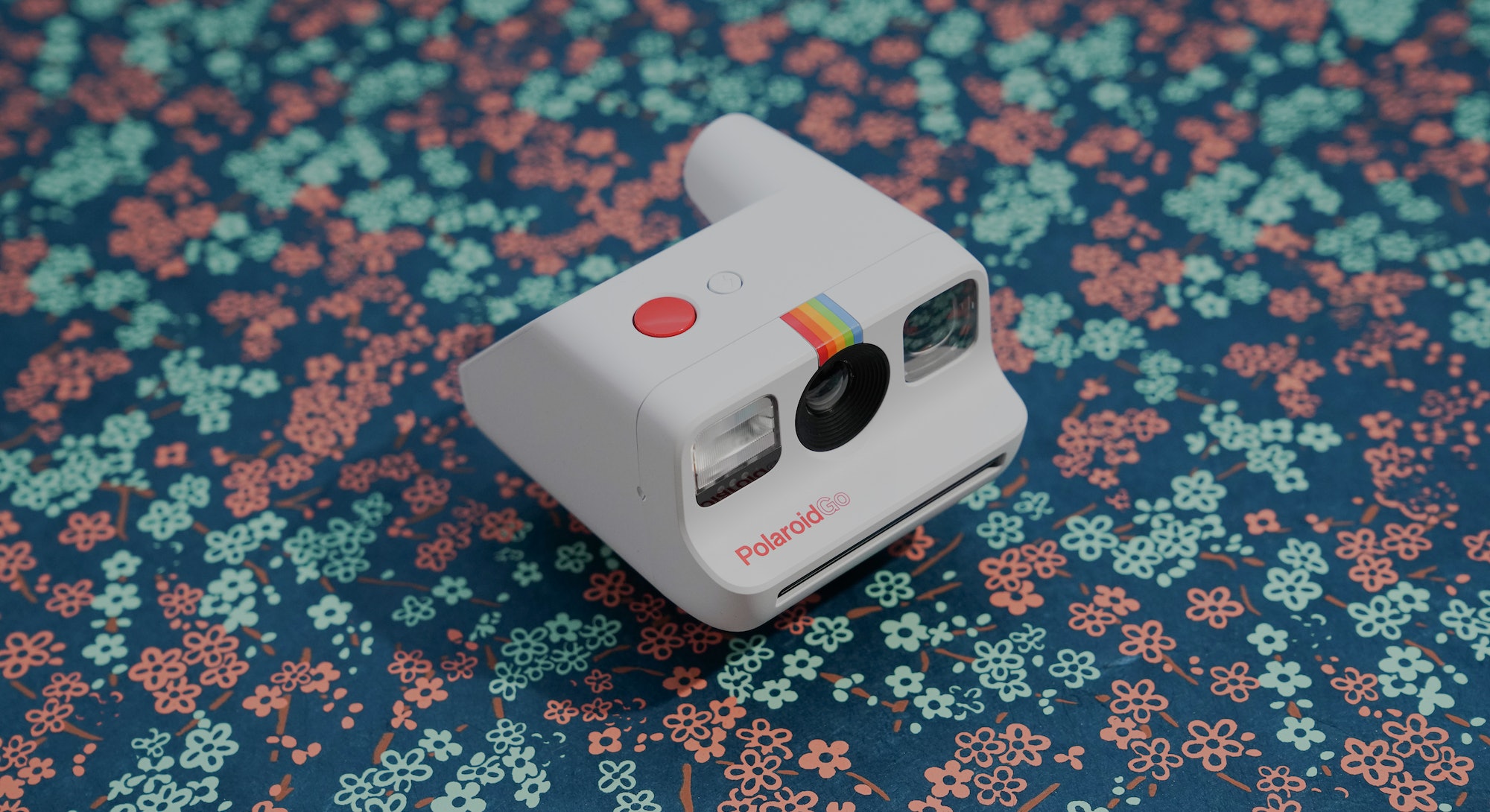 Everyone knows a Polaroid photo when they see it. The square 1:1 image, classic white border with room to scribble a message, differing opinions on whether to shake / not shake it — Polaroid instant photos are iconic.

Polaroid cameras such as the classic SX-70 and OneStep are equally loved, not just for their distinct designs, but for their contributions to making photography more accessible and fun. The new $100 Polaroid Go — a miniature Polaroid camera in every sense with its own faithfully shrunken instant film — is the latest attempt to rekindle the joy of taking photos without obsessively processing it for social feeds.

"Instant photography is a little bit of an antidote against this digital culture of always-on, always-connected," Ignacio Germade, Polaroid's chief design officer, told me. "[This digital world] where everything is perfect and you can retouch every picture in this fake reality and create this Instagram view of the world — [the Go] is a rejection of that."

“Instant photography is a little bit of an antidote against this digital culture of always-on, always-connected.”

Rather than forcing digital features like Bluetooth or app connectivity into the Go camera, Polaroid — salvaged from the remains of Impossible Project as Polaroid Originals in 2017 and then renamed Polaroid proper in 2020 after reclaiming the branding from its other half that produced (and still produces) a bunch of licensed junk like, uhh, a 3D printer and TVs — is hoping that analog photography can be a cure to camera roll overload.

I love this and after spending a week shooting with the Go (and letting a few vaccinated friends and family members play with it), I get where Ignacio is coming from. The Go is by no means the most advanced or affordable instant camera, but with more use, its limitations feel less like flaws and more like the photos it prints: charmingly imperfect.

The Polaroid Go is downright tiny compared to a typical Polaroid 600 camera. Fun fact that I didn't realize until later: the Go's footprint just barely fits inside that of a 600 print! How's that for a detail? At 5.9 x 3.3 x 2.4 inches and weighing 0.53 pounds, the Go can be stuffed in a jacket or coat pocket or purse. My OneStep 2 does not fit in my jacket pocket. Ignacio tells me that one of the first things Polaroid CEO Oskar Smolokowski did when R&D for the Go started about two-and-a-half years ago was to make a dummy prototype and jam it in his hoodie pocket.

Nailing this portability from the beginning was crucial to the Go's conception, says Ignacio. From the start, he and Oskar knew that getting the compact design just right would not only make the Go camera cute and approachable, but it'd also help dispel some of the perceptions that Polaroid only makes retro products. Drawing from Polaroid's heritage and through technology miniaturization, Ignacio says the Go is simultaneously familiar and new. "It's kind of like trying to bring Polaroid into the 21st century — the Go is helping us do the translation."

According to Polaroid, it took 2,100 technical drawings and dozens of prototypes before it arrived at the Go's final form. I adore it and so did everyone I handed it to. The rounded corners scream friendly and inviting. The plastic construction is unmistakably a Polaroid with film that's pushed out through a front-loaded slot (or mouth as I like to call it), an impossible-to-miss red shutter button, and a nice big optical viewfinder. Completing the design is a five-stripe rainbow — another reminder that this camera is not to be taken too seriously.

"From the beginning, we designed it from the inside out," explains Ignacio. "We were working with our mechanical teams, optical teams, electrical engineers to create internal composition that would actually allow us to have the external design that we wanted to have."

"When you look at it from the front, it looks effortless — there's no weird stuff. But when you see the inside of this product, it's hyper-packed. It's almost like a three-dimensional Tetris with all of the components using up all the space so there is absolutely no fat inside of the product."

Typically, shrinking a product means stripping out a bunch of features. Not so for the Polaroid Go since Polaroid 600 cameras already are pretty basic. The challenge wasn't so much deciding which basic functions to cut, but rather how to incorporate them into a much smaller volume, Ignacio tells me. The designers and engineers ended up making certain buttons and elements pull double or triple duty. The viewfinder doubles as a mirror for framing selfies. The flash button has two hidden functions as well: Holding it down activates the timer and double-pressing it shoots a double-exposure.

While the timer and double-exposure modes are straightforward to use, the selfie mirror is less than ideal. It’s sort of difficult to see your reflection in the 2-in-1 mirror / viewfinder, especially in the bright sun. I wouldn’t say it’s great for framing either. Even when I had my head perfectly centered in the mirror, the print came out off-center.

Apparently, the mirror and prism inside are doing a whole bunch of corrections to frame your head to the lens next to it. "This is the simplest solution and we have been working with our optics team to make sure that when you look from one side, everything looks [correct] — you're correcting parallax," says Ignacio. "And when you're looking from the other side — your nose is in the center when you're holding it for a selfie — that basically requires a different type of alignment of the mirrors."

When I told Ignacio that I preferred the mirror closer to the lens the way it is on Fujifilm Instax cameras like the Mini 40 because it's both visible and more accurate for framing, he said there's a tradeoff that comes with the pursuit of elegant design and engineering. "The tradeoff here is either you have a tiny mirror that is 100 percent reflective or you have a larger surface that has low reflection because at the end of the day what you're doing here is you're framing yourself and it's not about doing your makeup." He's got a point about the purpose of the mirror being a framing aid and placing it closer to the lens would have made the Go uglier for sure. It doesn't bother me as much after a week, but I'd be more forgiving if the mirror parallax magic got the framing correct every time.

Did you even notice the selfie mirror is in the viewfinder?Raymond Wong / Input
Micro USB... ugh.

I think I speak for everyone that USB-C would have been preferred. Ignacio agreed that USB-C's reversible design is a better port, but conceded that micro USB remains a "platform" and that "everything that we have done so far was using micro USB." When the timing is right, he says they'll consider USB-C for future products. It doesn't help with the present, but at least you get a micro USB cable in the box. The other end of the cable is USB-A and, no, the power adapter doesn't come included. On the bright side, you won't need to charge the Go very often unless you're shooting with it all the time; the rechargeable battery is designed to last for 15 packs of film.

There's no better way to describe instant photos than imperfectly perfect. Each shot is supposed to be an original — scratches, light leaks, discoloration, blurriness, overexposure, and all. It's the uncontrollable qualities that give Polaroids their "look." If you don't embrace these imperfections, you're going to hate when selfies come out fuzzy or don't reflect reality.

"There is an artistic component to shooting with Polaroid," says Ignacio. "It's like taking pictures of something and you're translating it into something more like poetry. There is a very poetic element to it. Even as we continue to work on the chemistry and improve it, we want to make sure that we never lose that because I think that is what is recognized as a Polaroid."

Unlike Fujifilm Instax film, which uses more modern chemistry and a faster development process, to print sharper and more vibrant photos, the Go uses the same kind of chemistry found in 600 or i-Type film. The only difference between Go film and 600 film is that they're smaller: 2.6 x 2.1 inches. For those who care, the width is equally as wide as Instax Mini film and the height is shorter; slipping prints in wallets or card cases isn't a problem.

This identical film chemistry has its pros and its cons. On the one hand, you're getting that genuine washed-out and super contrasty Polaroid film aesthetic. On the other hand, Instax Mini film produces more lifelike colors and sharper details. Polaroid Go instant film takes around 10-15 minutes to develop (a long time to wait!); Instax Mini only takes about 90 seconds. Polaroid Go film only comes in one frame style: white; Instax Mini film has all kinds of fun borders and collaboration designs. (Ignacio wouldn't comment on future frames, but if 600 film is anything to go by, fun frames might be coming!) Go Film costs $20 for 16 shots (double-pack of 8-shots each), which works out to $1.25 per shot; Instax Mini sells for around $15 for 20 shots (double-pack of 10-shots each) and comes out to $0.75 per print.

On paper, Instax Mini film is the better value. However, there's no other instant film that's quite like a Polaroid. Shooting film (instant or not) always costs a premium, yet it still thrives in a digital world because it can't be reproduced ad infinitum. It's impossible to take two perfectly identical Polaroid pictures and that's a lot of the appeal.

There's a fine line to walk whenever an iconic brand tries to draw from its pre-digital heritage. How much analog is enough or too much? Does it need a digital component to attract the connected generation?

With the Go, Ignacio flatly told me at no point during the development did their teams insist on trying to cram a digital feature in. "No, not at all whatsoever," he says. They had a very clear vision that the Go should be an analog camera and not include any half-baked connectivity for the sake of modernity.

"The idea was always to try to figure out a kind of new format for a new generation. How to make it easier for more people to have Polaroid cameras with them to be able to use them more often. Creating a tool that more people can take with them all the time is much more relevant to the next generation than adding Bluetooth and trying to connect it to their iPhones."

After a tough year where we could only connect with our friends, family, and loved ones through digital, the Polaroid Go and its prints are a satisfying and fun way to ease back into social circles. Unlike a post on Instagram, a Polaroid Go picture you give to someone has more permanence — in a wallet, on a fridge, on a wall, etc. Shoot, print, and share physically. It hits different now.

The Polaroid Go is tiny and adorable. Its prints are the perfect gifts to help us physically reconnect with people in a post-pandemic world.