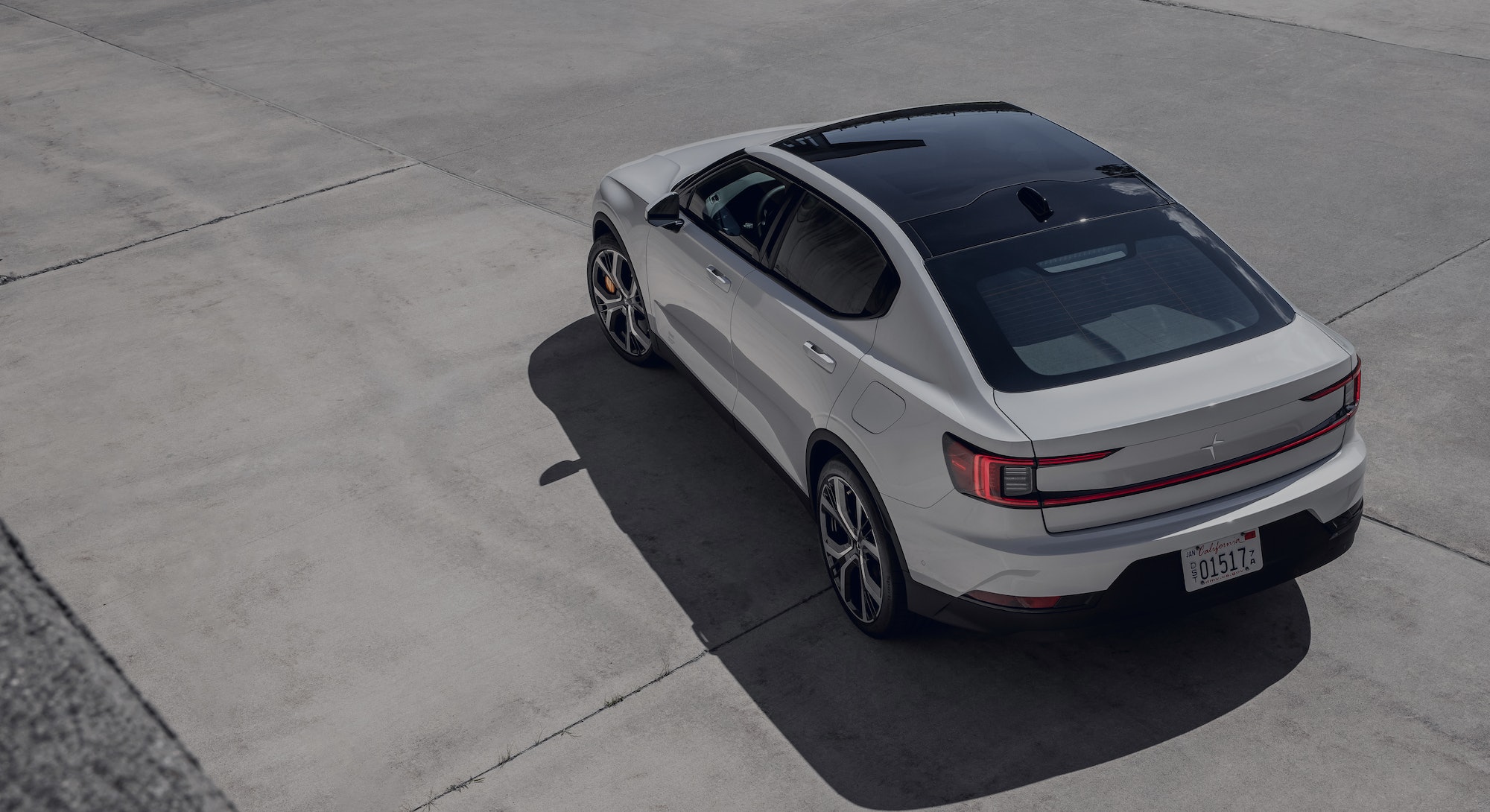 Before I reviewed the Polestar 2 I’d never driven an electric car, which is probably why I almost put it through the back of my garage the first time I put my foot on the gas pedal.

Can you even call it a “gas pedal” anymore if there’s no gas but, instead, electric motors and battery cells turning electricity into torque? Instantly available torque, that doesn’t drop off or require shifting gear ratios to maintain, I might add. And 660 Nm of it.

The delivery driver laughed and warned me to make sure I kept the car in park when stationary. I told him the acceleration reminded me of a Dodge Challenger and tried to hide my embarrassment at my near mishap. “Yeah, a bit,” he said, “Except this thing is much smaller and quite a lot faster.” No guessing which he’d choose between the two if given the choice, but then, he would say that, wouldn't he. After a few days with the Polestar 2, though, I’m inclined to agree.

I spent the next 30 minutes cruising down the back roads of Fairfield, Connecticut, marveling at how easy overtaking was, and enjoying the reassurances provided by the Pilot Assist feature gently guiding me back into the lane if I inadvertently started to stray from it. With its minimalist yet intuitive infotainment system and whisper-quiet operation, the Polestar 2 felt more like a space-age toy than a luxury car at first, and the craning necks of other drivers and pedestrians I passed made it clear they weren’t used to seeing it — or its star-inspired logo — either.

As the name suggests, this is the second Polestar vehicle, but that doesn’t mean Americans should be expected to recognize it. Despite being owned by Volvo, the first Polestar was only offered in limited numbers in North America and was priced in the six-figure range without even name recognition to lean on.

With the Polestar 2, that may be about to change. At least, Polestar is clearly hoping so. It’s growing the number of dealerships and workshops in the U.S. to support it, and appetite for EVs in the U.S. is growing fast. Also, the Polestar 2 starting price is $60,000, which not only makes it far more affordable than its predecessor, by also more competitive when pitted against Tesla’s Model S, or other electrified, luxury sedans from BMW and Mercedes-Benz.

Personally, I loved the Polestar 2’s aesthetic. It looks contemporary and sporty while still being understated and elegant. If cars are meant to send a message about their owner’s taste, I was perfectly happy with the message the Polestar 2 was sending.

Judging by the interior design alone, I’d say the Polestar deserves to share the stage with Tesla. Vegans will be pleased to know the seats don’t contain leather or wool. Instead, they’re made out of non-animal material known as WeaveTech, a water-based, PVC material inspired by divers' wetsuits. Even the carpets are made from recycled water bottles.

At night, the brand’s North Star motif is projected onto the panoramic sunroof glass overhead, and the car’s exterior design is just as polished and chic. It’s reminiscent of, well, a Volvo, which is not surprising since the CEO of Polestar is Thomas Ingenlath, who used to be the SVP of design at Volvo. Polestar shares many things with Volvo, but operates as a standalone business.

Aside from the Polestar’s sleek interior design, the car has a range of built-in advanced driver assistance systems including adaptive cruise control, lane-keeping, automatic emergency braking (including pedestrian and cyclist detection), and rear collision warning. All of which made it feel as if it was extremely unlikely, if not wholly impossible, that I’d have an accident in it — very reassuring considering my first few seconds behind the wheel.

While gliding along the snow-covered coastline where the speed limits could change on a dime, the Polestar 2 was able to alert me to upcoming changes by reading the road signs, and the regenerative braking which, as Polestar explains “turns every speed reduction into useful energy instead of just useless heat,” enabled single-pedal driving when I wasn’t using cruise control.

None of the aforementioned features are unique to Polestar, but they’re seamlessly integrated and accessing them via the infotainment system or physical controls is very intuitive, even for someone like me who wasn’t familiar with all of them. The infotainment system is one of Polestar’s unique selling points, actually. It’s deeply integrated with Google and Google Maps, Spotify, and other apps work with it seamlessly. If you’ve ever used Android Auto you’ll know what to expect. Polestar is also encouraging third-party app developers to build for the platform, and car owners will be some of the first to get to test out their offerings.

Throughout my test drive, the infotainment system offered me access to Google Maps, Google Assistant, and a host of other Google-enabled apps. I didn’t need them, really, since I was driving down familiar roads I’d driven along as a teenager, but I made a point of using my voice to change my destination and delved through the menu when parked, all the while marveling at how slick the experience was. Car infotainment systems are often clunky because carmakers aren’t adept at building great user interfaces. The Polestar 2 has no such problems.

The most exciting part of the Polestar 2 is starting it.

But the most exciting part of the Polestar is starting it. I was able to get on the road in seconds since there isn’t any button to push or ignition — the car simply comes to life when a sensor embedded within the driver’s seat detects the owner in the seat and the key in close proximity. Once I sat down and put my foot on the brake, the car was ready for take-off.

Turning the car off was equally simple: put it in park mode and get out. At first, this novel starting mechanism caught me off guard, and a couple of times I left the key out of range and walked back to it to make sure it really was locked, but after a few hours I got used to it... which meant going back to a car without the feature a few days later felt like a huge step backward.

While the Polestar 2 may be as luxurious as a Tesla, it doesn’t quite stack up when it comes to flexibility. The 78 kWh battery is rated for a maximum of 291 miles to a charge, which isn’t that far off from a Tesla Model X or 3, but less than the long-range Model S, and it did mean I opted not to try and take the car to New York City or Boston, fearful I might be cutting it too close for a roundtrip... and might be unable to find somewhere to top up the battery. Of course, the Polestar 2 isn’t positioned as a vehicle for cross-country trips, but one of Tesla’s biggest advantages is its extensive Supercharger network, and it’s something every other EV maker is going to have to find ways to compete with.

Quite simply, charging the Polestar 2 needs to be easier if it’s going to compete. The car’s included AC charger adds roughly 25 miles per hour when plugged into a standard outlet, which translates to around 8 hours for a full charge. Instead, it’s recommended to use a DC Quick-Charger, which adds 220 miles of range in 45 minutes, but you’ll need to find a compatible one.

By the time my weekend with the car driving through a mix of urban and suburban roads was over, the dashboard suggested I could have eked out around 200-215 miles from it. Part of that probably comes down to the Polestar 2’s 4,680-pound weight. Of course, that same heft is why it feels so luxurious and safe. But it’s also why the vehicle’s 0-60 mph is just shy of 4.5 seconds... which is a lot more sluggish than a Tesla which, with the package add-ons, can shave that to 3.1 seconds. Then again, I don’t think anyone buying a Polestar 2 is primarily motivated by whether or not they’ll beat a Tesla in a drag race. It is, after all, a luxurious family ferry, not a muscle-car replacement.

Still, at no point did I think the Polestar lacked for speed or acceleration, which is probably why the optional $5,000 performance package doesn’t add to the 300 kW power output or other mechanical specs and instead adds fancier brake calipers, lighter-weight wheels, and cosmetic touches like gold seatbelts and tire valve caps.

Ahead of its time

In the end, it feels like the Polestar is arriving at the perfect time... or, more accurately, slightly ahead of it. America is starting to embrace the inevitable electric revolution, but Tesla has a massive lead and the charging infrastructure for non-Tesla EVs isn’t quite there yet. But it’s coming, and it’s coming fast. GM, Ford, and other American carmakers are following their Asian and European counterparts in collectively adding dozens of EVs to their roadmaps. Polestar, meanwhile, is growing its U.S. footprint of showrooms and service centers in anticipation.

In the carmaker’s homeland of Sweden, the Polestar 2 has already outsold the Tesla 3. It may take a while longer to rival Tesla here, but I’m pleased to see it making all of the right moves that suggest it intends to (including turning its once concept-only “Precept” into a production vehicle). I could absolutely imagine using the Polestar 2 as my daily car. It’s a glorious machine with no obvious omissions, aside from ease-of-refilling... but that’s not likely to be a problem for much longer.