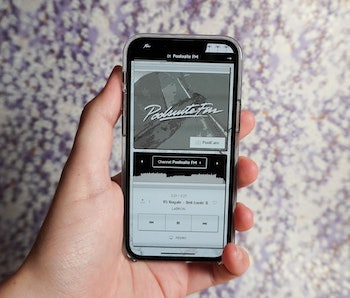 For me, working is about creating a good environment for work to happen first before actually sucking it up and doing something.

I’m admittedly guilty of using that philosophy as an excuse to do nothing, but every time I’m not, the place where I usually start is music. Finding the right music to listen to while you write is tricky, but the radio app I’ve turned to again and again for some chill background noise is Poolsuite FM.

Poolsuite FM, developed by Poolsuite, a company that counts a line of sunscreen as its main other product, is designed to look like an early Mac app that somehow slipped into the present. It’s all green and gray, with pixelated line drawings of late summer nights, driving sports cars, and pools. If the ’80s and CRTs never died — and indeed the taste for the music of the ’70s and ’80s never did — this would be their app.

Beneath the thick layer of theming, Poolsuite FM offers a fairly straightforward internet radio experience, doing just enough to be worth the razzle-dazzle. There are multiple channels to choose from, basic playback controls (including the option to AirPlay to other speakers or screens), and the ability to bookmark songs you like for your own custom channel of tracks.

Channel names should hint at the general tone here: There’s the classic Poolsuite FM, Friday Nite Heat, Baeleric Sundown, Indie Summer, Hangover Club, and Tokyo Disco. Actual music selections vary from Japanese city pop, to '80s dance tracks, to remixes that straddle multiple genres. Almost everything is at least retro-inspired, in most cases chill, and all of it pretty instantly captures a summer mood that can make the dreariest of work days bearable.

That’s really the trick of listening to music while you work. Yes, lyrics can often be distracting and music that features less of them are usually easier to listen to, but the mood is just as important. Epic film scores can only get me so far (many thanks to the Interstellar soundtrack), sometimes the music that makes me want to work the most is music that reminds me that there’s summer waiting for me when work is over.

Arguably you could achieve a similar effect on Spotify or Apple Music, and I don’t begrudge anyone who’s already figured out what works best for them with a custom playlist, but I appreciate getting exposed to new music (especially remixes that might not be available on a major streaming service) and I like the ability to set it and forget it. It’s a big part of my personal summer lifestyle.

In the end, my desires are simple: I just want a good vibe.

Poolsuite FM, from its music selection to its entire presentation is pretty effective at fitting into that. And better yet, it’s just as accessible on my phone as it is on my laptop. Poolsuite FM has a great little iPhone app; there are plans to release an Android app; and eventually, even an app for the Playdate when the tiny handheld’s Bluetooth speaker dock launches at some point in the future. I can’t really think of a better aesthetic match.

During the summer, the greatest feeling work can offer me is that it can in fact end, and Poolsuite FM, of all the weird music apps and Pomodoro timers I’ve tried, gets me the closest. In the end, my desires are simple: I just want a good vibe.