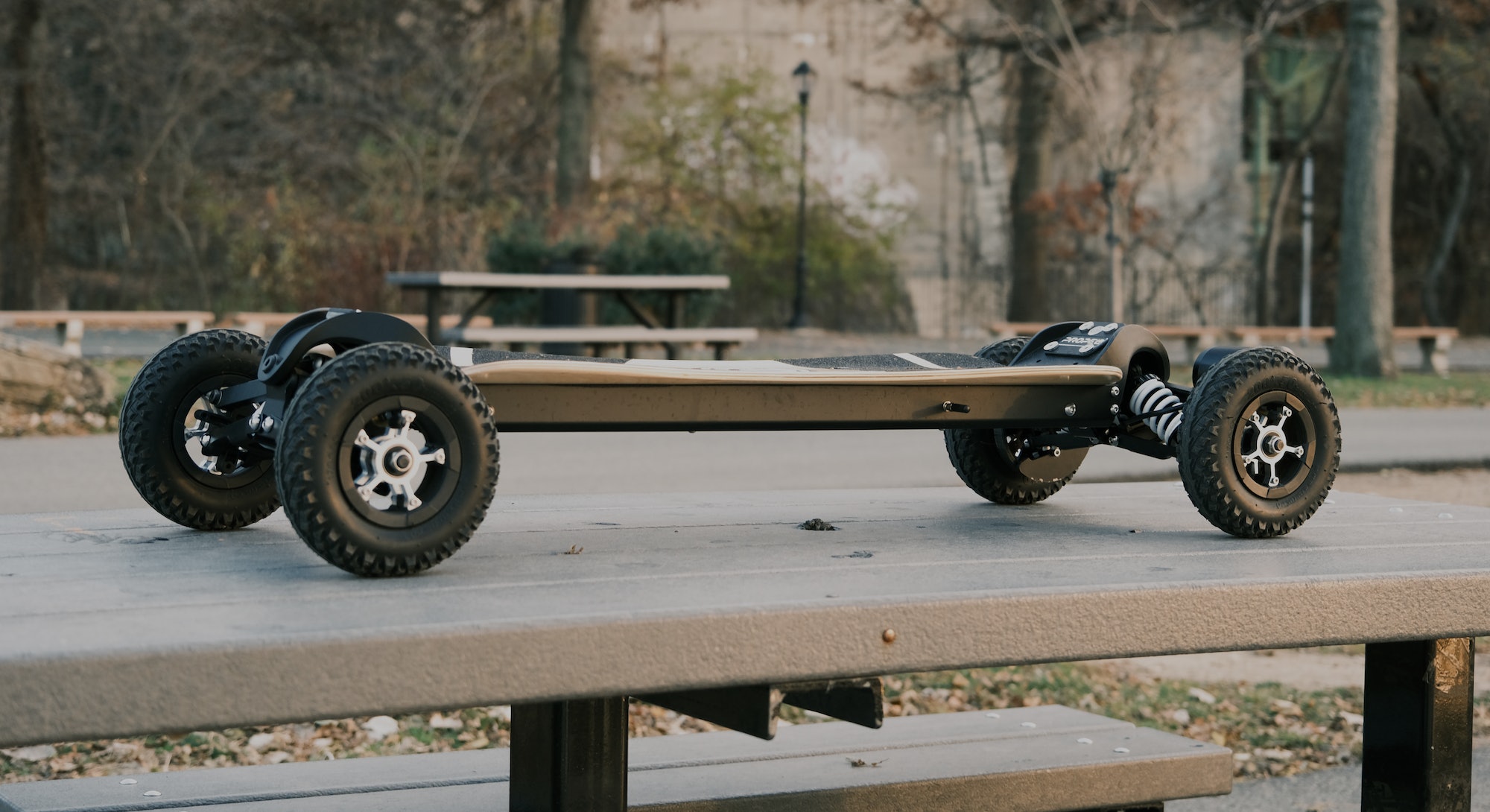 Even though it’s been almost two years, the world of electric skateboards still seems punctuated by the rise and fall of Boosted.

After the company shut down, it really felt like the hype around electric skateboards died down. For consumers, however, the hole left in the market has been filled by a number of companies that are putting out almost identical boards, but at literally half the price. I was an original Boosted owner, and now I have a Backfire Zealot with Cloudwheels and it’s great.

But even in Boosted’s heyday there lurked an even smaller community of offroad electric skateboarders cobbling together their own DIY boards with huge batteries, huge tires, and huge motors. That went on for a while, then commercial boards with pneumatic tires started to hit the market, and now commercial boards like the Ecomobl M24 Pro with full suspension are gaining traction with offroad athletes, who are essentially using them like offroad snowboards, boot straps, and everything.

The Ecomobl M24 Pro and the Propel X4S, both monster offroad boards, weigh 55 and 60 lbs respectively, and that’s just too much for most people. That doesn’t mean they don’t have a place in the market, but these boards are simply not suited to commuting or everyday life, and having spoken to reps at both companies, they would tell you the same thing.

The Propel Endeavor S is an offroad electric skateboard that’s also great for the city.

The Endeavor S that I’ve been testing weighs 38 pounds, so it sits between lightweight street boards like my Zealot (18 lbs) and the M24 Pro (55 lbs). This means this board can handle streets — including some of the awful streets here in New York — and some offroad terrain.

There’s a meaningful compromise at play here: the Endeavor S is a bit of pain to lug around, but in return, you get big, knobby tires that really stick to the pavement, suspension that easily handles cracks and bumps, and just enough ground clearance to make it over those huge steel plates they put on the ground here in New York to cover gas line repair work. For those not in the know, those steel plates will absolutely wreck you if you try to take them with 80mm PU wheels.

So is the Endeavor S a street board with offroad credibility, or just an electric skateboard that’s actually safe enough for people to ride? The answer is both, and even though I was really excited to hit the grass (I’ll get to in a moment), I think it’s really worth emphasizing that Propel has made a meaningful improvement in overall accessibility with this board, even though that’s not the vibe the gruff offroad exterior provides.

Obviously, if you’re going to push a big board like this, you need beefy motors. Propel decided to use two 3,000 watt “6374” motors that connect to the wheels via a belt drive. Of the three electric skateboard drivetrain types — direct drive, belt drive, and planetary gears — the belt drive makes the most sense for a board at this price level. Bajaboard, what some would argue is the OG offroad electric skateboard company, uses a custom gearbox, and while that is awesome, a comparable S2 from Bajaboard costs around $3,000.

The motor controller on the Endeavor S has four modes, and I usually ride in “Hi” because I'm 32 and want to keep all my bones unbroken. I don’t ride any of these boards at top speed because, again, bones, but what I can tell you is that the motors and belt ratio in the Endeavor S will deliver the torque you’re looking for. You can go irresponsibly fast on grass and dirt, and it’s a lot of fun.

One thing I was very curious to experience myself was the braking on the Endeavor S. Braking is one of those things that people don’t really talk about, but it has a huge impact on the ride. Here, the braking is good; it’s not too abrupt, and it always feels like there’s enough torque to stop. You can also adjust the tenacity of the brakes with the remote, which is great.

There are two models of the Endeavor, the S model that we’re testing and the Pro model, which costs significantly more at $1,999. There are only a couple of differences between the two: the Pro model has a carbon fiber deck and a 1,110 Wh battery, which is almost double the 666 Wh battery in the S model.

As a somewhat heavier rider, the quoted 28 km (17.3-mile) range was exactly on point in my testing. That’s more than enough for casual riding and commuting in the city, but probably won’t be enough if you’re riding on trails with a lot of elevation gain.

Despite doubling the battery capacity, the Pro model only weighs about six pounds more, so if money is no object, I would go with that one.

I’ve established that the Endeavor S is great on the streets, especially bad ones, but what happens when you go offroad?

First, I should explain that the suspension and the steering on my test board were quite tight right out of the box. This actually makes sense considering the board is mostly for use on pavement, but after loosening things up a bit I started getting the suspension travel I was looking for.

Once that was done I took the board to the park, looked both ways for park rangers, and took off on some grass and dirt paths. (Don’t worry, I did my best not to damage any grass or plant life.) Anyway, this is something you just have to try; there’s no way not to smile when you’re (metaphorically) ripping up the trail.

The only thing to keep in mind is that the Endeavor S only has 4.25-inches of ground clearance. This is quite good compared to a lot of boards but isn’t enough for huge roots and rocks, or going over curbs if you’ve loosened up the suspension a lot. Once you get a feel for the suspension travel and know what you can and can’t make it over, this isn’t a big deal at all.

At $1,999 the Endeavor Pro feels pretty accurately priced for an enthusiast board. But at $1,199, the S model is a very compelling deal. Here are some competing “all-terrain” boards from some of the most established brands:

Of these, only the Ecomobl has suspension, so when you consider the Endeavor S’s battery capacity, build quality, power, and suspension, $1,199 starts to look like an absolute steal.

Unlike the M24 Pro, the Endeavor S is an offroad board for everyone. It comes with knobby tires by default, but the company sells 7-inch street wheels on its website. Sure, it’s physically larger than most boards with regular longboard trucks, but it’s also extremely stable. Even people brand new to electric skateboarding would have a hard time falling off of this board.

Plus, at this price, there’s basically no competition. If you’re looking for an off-road board, the Endeavor S is just a no-brainer.