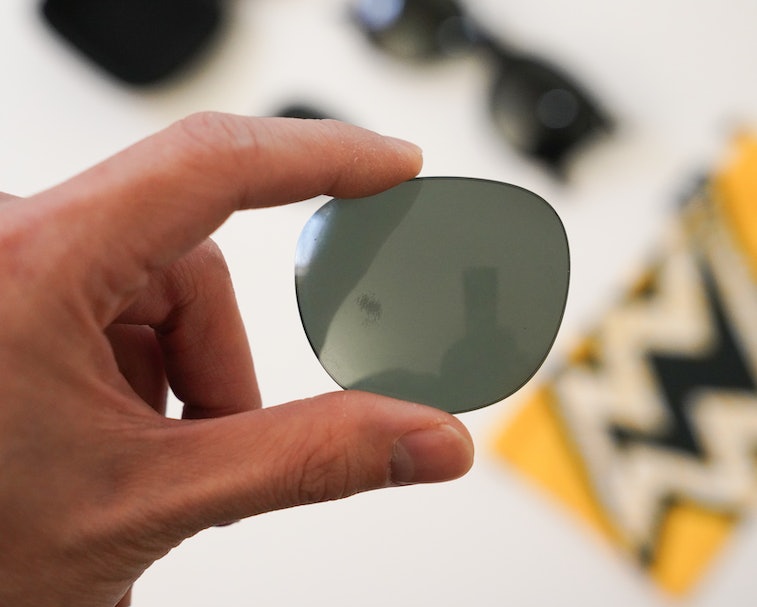 Ray-Bans are basically the gateway drugs of designer sunglasses. It seems like everyone owns a pair, because most frames, like the classic Wayfarer, are a stylish way to protect your eyes from sun rays and let everyone know you spent more than $5 on them.

Right after graduating college, I overdid the “I’ve got a job and I’m buying nicer sunglasses” thing and might have purchased a few too many Ray-Bans. Being the idiot I am, whenever I scratched the lenses, I’d just buy another pair (on sale of course), rinse and repeat. But no more!

I’m sick and tired of setting fire to my cash. I’m moving soon and I’m in the middle of sorting out all my stuff (donating, selling, and tossing). Old me would have thrown out this pair of Ray-Bans with the scratched-up lens — the scratch is large, deep, and right near the middle, which makes it really hard to see through. Not to mention, it looks terrible. After about 10 seconds of Googling, though, I found Fuse Lenses, an online site that sells replacement lenses for just about every version of Ray-Ban imaginable.

I can’t say enough good things about my new Ray-Ban lenses. Fuse Lenses are easily going to be one of the best things I purchase this year.

I’ll be honest, given the price, I wasn’t expecting high-quality lenses. I definitely didn’t expect the lenses to come in a little hard case with a drawstring bag to store your newly restored sunglasses. And I absolutely wasn’t expecting the lenses to come with a “1-year warranty, one-time replacement guarantee.” Also, this: “FSA/HSA and installment pay options available.” Goddamn, that’s a good deal and I wish I had known about this one when I made my order. I promise you some cheapo replacement lenses you find on eBay or AliExpress won’t include jack.

With a little pressure, I pushed out my scratched-up left lens and popped in the new one from Fuse Lenses. It’s a perfect fit and, as far as I can tell, looks identical (be sure to pick the right tint, though). And don’t worry, Fuse Lenses’ lenses come in different types: polarized + anti-reflective, polarized, and non-polarized. I only needed to replace the scratched lens; I decided to keep the right one with the Ray-Ban logo.

I should mention the disclaimer at the bottom of Fuse Lenses’ website:

Also according to Fuse Lenses:

Fuse Lenses manufactures its own line of replacement lenses made from polycarbonate for maximum optical clarity, impact resistance and tensile strength.

If non-OEM lenses bother you, then look elsewhere for replacement lenses. I already see a hairline scratch deepening on the right lens and I suspect I’ll replace it with the Fuse Lenses one at some point.

If you do a search, you’ll find some unhappy customers saying the lenses don’t fit. I can only speak for my own extremely positive experience; maybe they purchased the wrong size. Fuse Lenses has a 60-day guarantee.

A couple of other things. Fuse Lenses sells replacement lenses for 76 brands from Christian Dior to Tom Ford to Louis Vuitton. You can also get the lenses with prescriptions according to the site FAQ. And get this: If your sunglasses aren’t listed, you can ship your frames (for $20 in the U.S.) and they will make new lenses and install them for you. That is a commitment to providing a service for the people!

More like this
Jackson Chen
8 hours ago
Reviews
The DJI Mini 3 Pro is a gamechanger for drones under 250 grams
Andrea Carrillo
8.8.2022 5:00 PM
This Thing Rules
These no-waste body wash sheets are a new staple in my travel bag
Maya Ernest
8.15.2022 7:30 PM
Style
Tag Heuer’s Porsche smartwatch puts your car’s vitals on your wrist