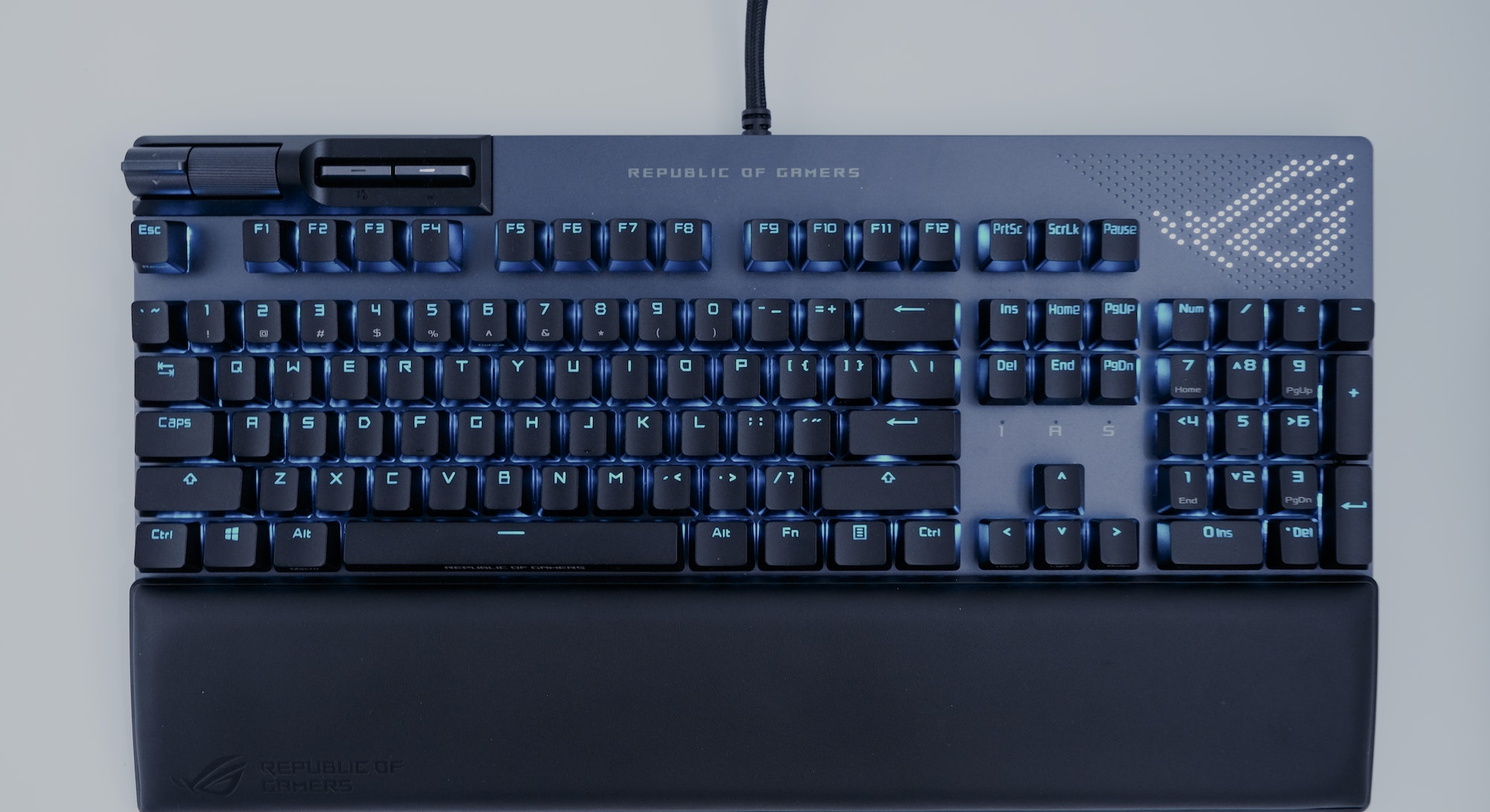 For a while now, high-end custom keyboards like the Satisfaction 75 have integrated OLED screens that could be programmed with custom-made animations.

More recently, Steelseries got in on the fun with their Apex Pro TKL. Now, Asus ROG is mixing things up with the Strix Flare II Animate (another mouthful-of-a-name product), which incorporates a massive single-color LED array occupying the entire top right corner of the keyboard.

The Strix Flare II Animate, named for its animated LED display on the top right, is a stylish keyboard meant to be the tastefully bright centerpiece of a PC gaming setup. Because of this, it comes with all the bells and whistles: hot-swap sockets, bright RGB LEDs both in the keyboard and in the wrist rest, custom-made multimedia controls, internal silencing, and a high-quality feeling that’s hard to find in pre-built mechanical keyboards today.

Okay, I’ll admit, I’m incredibly tough when reviewing a keyboard’s typing experience. However, ROG seems to have it figured out. For the price, the Strix Flare II Animate feels great to type on. The switches — ROG’s own NX Red switches — are smooth and they have well-weighted springs, and the entire keyboard feels solid and stable with them installed. In addition, the keyboard’s built-in silencing actually works (I’m as surprised as you are), eliminating the loud echoes and pings which would likely be present otherwise.

Honestly, I’m kind of amazed by this keyboard’s typing.

Honestly, I’m kind of amazed by this keyboard’s typing. The switches are a bit scratchy, but they have almost no wobble, and the scratchiness is minimal enough that most won’t notice it at all. Also, the springs feel consistent and the actuation point is low enough that typing isn’t awkward. Considering these are in-house switches designed by ROG, they’re really high-quality.

These switches sound pretty good, too. They have a solid, crisp clack that sounds high-end, and any ping or rattle is (mostly) eliminated by the silencing foam installed in the case. Their sound profile reminds me of a vintage office keyboard in the best way — smooth, crisp, and precise.

It’s also worthwhile to note that the stabilizers, which are the same type as the ones in Razer’s mechanical keyboards, have some kind of lubricant, similar to dielectric grease, applied to reduce rattle and noise.

Typing on the keyboard, I was able to maintain 110 words per minute (WPM), which sits just below the 125 WPM I am able to get on my usual linear keyboard, a Boardsource Mark65 with Blue Velvet PME switches. When playing games like Halo Infinite and Destiny 2, I found myself able to hold my own, with inputs being just as consistent as any other board. In addition, the multimedia controls located directly above WASD made adjusting audio levels and changing music while playing much easier, since it required less hand movement than it would have otherwise.

The typing experience feels like it was designed by someone knowledgeable about building a good keyboard. Of course, this isn’t the amazing typing experience that can be attained by a high-end custom, but it’s leagues ahead of most gaming-branded mechanical keyboards, and the customization potential of this keyboard makes the package even better.

With shine-through keycaps, RGB LED lights, “REPUBLIC OF GAMERS” branding in two different places and a large LED array in the top right corner, this keyboard isn’t light on lighting. However, it’s done tastefully; the keycaps look good with the lights off, and there aren’t any dramatic, unnecessary angles or cuts meant to make the Strix Flare II Animate look “high-tech” or “tactical” for no reason.

Even the dials and buttons on the top left feel good to use. The rocking dial and the rotary encoder, mapped to forward/back and volume respectively, are both solid and satisfying to use. The two buttons next to them, which lock the Windows key and enable/disable lighting effects, both have a solid and sturdy “click” despite being non-mechanical switches.

Looking through the software, there are also some interesting options for gamers. Users can disable the Windows key and Alt+Tab functionality (in “gaming” mode), and reprogram pretty much any key, including the dials and buttons at the top. Five separate profiles can also be stored in the keyboard, all of which are accessible through pressing the function key and 1 through 5. The funniest inclusion, however, is what I call the “anti-rage quit” setting. With this, the functionality of Alt + F4 — a key combination that you’re pretty unlikely to hit by accident — is entirely disabled while in “gaming” mode.

While I don’t think it’s worth writing about in-depth, this keyboard does also boasts an 8,000Hz response time. This likely won’t make a noticeable difference in your game unless you’re in the top 0.01% of gamers, but it won’t cause any problems either — a higher refresh rate is almost never a downside.

The customization is made better by the inclusion of hot-swap sockets, which allow users to remove the included NX switches without desoldering. This can be useful for tuning the switches or replacing them entirely, something that would otherwise be incredibly inconvenient. This also makes your choice of switch much less important, since you can replace them for a fraction of the price of a full keyboard if you end up not being a fan of them.

It’s leagues ahead of most gaming-branded mechanical keyboards.

Some of the Strix Flare II Animate's convenience features aren’t perfect, though. For example, USB passthrough is nice, but feels unnecessary in the age of wireless mice and headsets, especially when said USB port results in the cable splitting off at the end into two separate USB-A connectors. And maybe I’m just too young, but like I said when reviewing the MSI GK71 Sonic, I still can’t understand why anyone would opt for a full-size keyboard when they could have an 1800-layout keyboard like the Drop Shift, a TKL like the Razer Huntsman V2 TKL, or even a 65% keyboard like the Mode SixtyFive with a separate numpad. All of those layouts make more sense for day-to-day use, and take up less space on your desk.

The main selling point of the ROG Strix Flare II Animate is the programmable LED Matrix located in the top right corner of the keyboard. The animated display, called the AniMe Matrix (yeah, we know), can be programmed to display different animations, key inputs, and information from your PC.

This system’s main downside is that it can only be used when ROG’s software, Armoury Crate, is installed. The animations can’t be saved onto the keyboard and, as such, they won’t be maintained when switching between devices. While this isn’t a major issue for a keyboard like this (the full-size layout and two USB ports make transporting this keyboard and using it on other systems fairly impractical), it is still mildly disappointing.

Besides that, the LED matrix is great. The system is simple, robust, and comes with a lot of programming options out of the box. There are preinstalled animations that can sync with system audio and display date and time information, along with cosmetic animations designed by ROG that just look cool. In addition, you can upload your own images and GIFs, which the software converts to black and white. The only major issue is a pretty obvious one: The array is really low-res and, as a result, most images will be fairly hard to make out unless they have high contrast (or if you squint).

While it wasn’t a problem for me, it is worth noting that the matrix only has white LEDs and, as a result, can’t match with the rest of the keyboard’s color (unless you set the backlight to white as well). It's not a problem for most, but it can pose an issue if you want your entire setup to be one consistent color, or if you want to have the matrix show a multicolor video.

Along with that, there seems to be some sort of limit on file size or length. I was able to upload shorter GIFs below a couple of megabytes, I was unable to upload a full-length GIF of Shrek (2001) that was around 40MB (the app froze when I tried to upload it). Whether this was purely due to file size or a combination of file size and length, I’m not sure. But either way, I’m not particularly disappointed, since it seems like a pretty reasonable limitation.

The overall construction and material choices of the Strix Flare II feel high-end. The case, a mix of plastic and metal, has no flexibility and is solid. The silencing foam on the inside prevents the typing from sounding particularly hollow or plasticky and also provides a weight that feels premium.

On top of the switches, ROG is using dual-shot PBT keycaps. While they aren’t particularly thick, they get the job done without being too flashy. Typing on them, the matte texture feels high-quality and works well to keep your fingers on the right keys. The keycaps aren’t special, but they’re not bad either. And let's be honest, your keycaps are probably one of the first things you’ll upgrade once you get a new keyboard.

The wrist rest, which is made from memory foam, is comfortable for long use, and the magnetic attachment to the main keyboard means that it doesn’t slide around during use. Along with that, the RGB LEDs shining through the wrist rest is actually really cool — it looks good and makes the entire keyboard feel like one uniformx\ package. The only issue I have is how high the wrist rest sits. Because it’s at almost the same level as the lowest row of keys, it can make pressing the spacebar and other bottom-row modifiers a bit difficult until you’ve gotten used to it.

However, I couldn’t find a way to open the Strix Flare II Animate without feeling like I was going to break something. Even after peeling off a sticker on the back and removing almost 20 screws, the keyboard refused to come apart. While I imagine working on this keyboard would be fairly difficult with the unconventional multimedia controls, complex LED array and silencing foam, it’s still disappointing that it can’t easily be opened up. The proprietary, non-removable dual-ended cable does make repairability a concern, it's balanced out by the hot-swap sockets, which make switch replacement a relatively easy task.

Overall, the ROG Strix Flare II Animate is one of the highest-quality mechanical gaming keyboards I’ve looked at. It’s solid, simple, and has a cool gimmick that legitimately adds to the experience. And along with that, the hot-swap sockets mean you aren’t stuck with the included switches if they don’t end up suiting your needs.

Coming in at $220, the Strix Flare II Animate is one of the more expensive gaming-oriented mechanical keyboards, and it ends up competing with optical keyboards like the Corsair K100 and Razer Huntsman Elite. In terms of technical gaming performance, both of these options are slightly better than the Strix Flare II Animate. However, traditional mechanical switches with hot-swap sockets still allow for customization and repairability that optical switches don’t have.

The main advantage that this keyboard has over the others, however, is pure style. It looks great, sounds great, and has really impressive (not over-the-top) lighting options. If you want the very best-performing mechanical keyboard on the market, then the Strix Flare II Animate probably isn’t for you. But if you want a keyboard that’s still high-performing (I would say it’s around 90 percent of the way there) and way more fun, then this is the mechanical gaming keyboard for you.