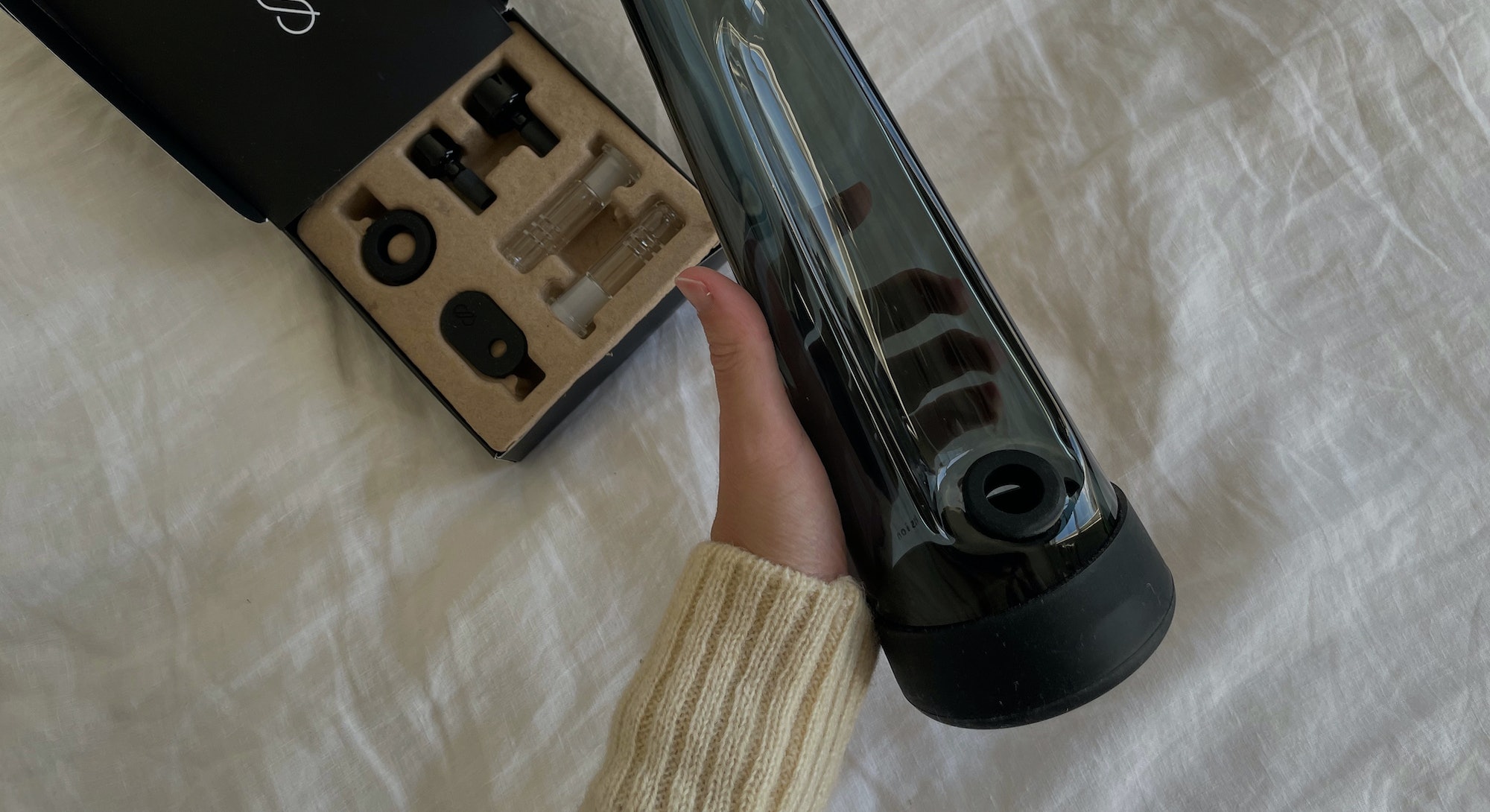 Session Goods describes its bong and pipe set as “designer” and “classy,” two words that are typically not associated with the accessories or, really, smoking in general.

Still, the adjectives caught my attention. While I consider myself a regular toker, I hadn’t smoked out of a bong or pipe since college — mostly because either is difficult to clean, store, or transport. Instead, I lean towards joints (portable), edibles (potent), and topicals (powerful enough to treat my chronic pain). Like most weed smokers, ease and comfort are my top priorities.

In college, I did enjoy smoking out of a pipe. There’s no rolling involved, and a pipe is about as portable as a glass piece can get. Bongs, on the other hand, delivered a stronger high for me at the cost of nearly coughing up a lung, a price not worth paying considering most of my smoking is to relieve pain, not cause it. Most water bubblers (as your parents or hipster friends may call a bong) also boast poor design, making them fragile and hard to look at. Bongs weren’t worth the hassle to me, especially when under the influence.

So when Session Goods asked if I wanted to try its “classy” bong and pipe, I was hesitant. How good could a bong or pipe possibly be? I thought. Certainly not worth the bundle price of $250. And what the hell makes it ‘designer’ other than a sleek, minimalist silhouette?

For starters, that $250 bundle includes everything you’d need to light up, sans the actual raw product. Unboxing the collection, which comes in classy matte black boxes, reveals the black Designer Pipe in a silicone carrying case and the black Designer Bong with a protective silicone footer. The latter also came with a large bowl, a small bowl, an extra grommet for keeping each piece in place, a silicone pull tab, and two downstems (in case of inevitable accidents).

I tried the pipe first. Its sleek design fit easily in my (arguably small) hands, and two miniature feet on the wider base of the piece made it easy to balance on surfaces and pack. Its bowl fit a decent amount of flower and lit with ease, producing multiple smooth and perfectly-sized hits. An indent near the mouthpiece, which I initially dismissed, made its intention clear when I lit up too, catching any ash that was accidentally sucked through the piece.

The experience was enough to persuade me to switch out my usual joints for the pipe, at least at home. While the glass piece offered freedom from papers, filters, and best of all, rolling, I didn’t feel as comfortable toting around loose bud with the pipe. It was a bigger commitment than just carrying a pre-roll and a lighter — and for me, that commitment wasn’t worth it. Still, had I clipped the pipe’s silicone carrying case on my bag or pants, I’m sure some people would have only assumed I was after another, more intimate high.

In between trying the pipe and transporting it to a friend’s house for further research, I cleaned the piece with Session Goods’ signature cleaning solution. The process was faster than cleaning any pipe I had ever owned, no doubt thanks to the combination of a sleek glass design and Session Goods’ potent isopropyl alcohol-based cleaner.

I was thoroughly impressed with the pipe, enough to deem it designer (classy still seemed like a bit of a stretch considering the sweats I prefer to wear when smoking). Between its attractive look, how smooth it smoked, and how easy it was to clean, Session Goods’ pipe will undeniably be included in my regular smoking rotation, and I’d recommend it for yours too.

Huddled in a circle, we loaded up the bong with the goods, utilizing the larger bowl of the two included. I slipped the black silicone tab onto the base of the bowl to provide padding between the downstem, in turn making it easier to pull the bowl out when needed. All we needed was water (both in the bong and in glasses, as we were preparing for the smokiest case scenario).

Pulling out the bong’s downstem.

The silicone footer at the bottom of the water bubbler — initially not my favorite thanks to the material’s habit of collecting lint — here became my favorite part of the piece. Not only does it create an air-tight seal to prevent water from leaking into your bowl, create a soft landing between the bong and hard surfaces, and hide unsightly water, but the footer also indicates the recommended water line in your bong for the perfect hit. It makes preparing to smoke exactly how smoking should be: effortless.

With a tentative flick of the lighter, we began our experimentation. Having provided the bud and the piece, I kicked off the rotation, taking a bigger hit than intended because the bong’s black glass made it hard to see just how much smoke was filling its chamber. Still, I was able to pull the hefty hit back with minimal coughing and most notably, no raspiness in my throat. Perhaps it was the filtered water we used to fill the bong — we weren’t going to fill a designer piece with just regular water, after all — but the piece hit smoother than any other I had tried.

My bong-loving friend took her own hit and had a similar experience, attributing it to the design of the water bubbler. With a larger mouth, shorter downstem, and heavier base design than most bongs, the Session Goods piece seems to hold smoke in the center of its chamber, allowing users to build up a bigger hit or opt for a smaller one. We tested both sized pulls, throwing in a few medium ones for good measure, and agreed the bong offered smooth hits either way. A few days later, said friend texted me saying she was thinking about buying her own Session Goods bong. According to her, it surpassed the three pieces she already owned.

The last friend to try the Designer water bubbler had nothing to compare it to, but did enjoy her experience (her review consisted of a very enthusiastic two thumbs-up). It’s safe to say the Session Goods bong is suitable for any type of smoker, whether seasoned or not.

After the sesh, the bong’s minimal design came in handy again. I simply switched out the downstem and bowl with one of the cleaning caps, filled the piece with cleaning solution, and shook it up. Any lingering resin seemed to melt off the sides of the glass, soothing past memories of scrubbing pieces for hours with salt and alcohol. Damn that’s easy, I thought to myself. Is this what liking a bong feels like? Is this what designer means? To both questions, yes. I, a bong-hater, loved this bong. Because of its effortless cleaning process and its smooth yet smoky hits, this water bubbler had earned the designer label in my (somewhat stoned) eyes.

I, a bong-hater, loved this bong.

Passing the bong around felt heavier than usual, not because we were high but because of the piece’s borosilicate glass, also used to create Session Goods’ pipe. The glass, made of silica and boron trioxide, keeps each piece from cracking under extreme temperature changes or shattering on impact. This means both the pipe and bong are more durable than your average smoking pieces, and should last you that much longer — perhaps justifying their more expensive pricing.

After trying both pieces, I understand the hype. Both the bong and pipe are beautifully designed, offer an elevated smoking experience, and can be cleaned quickly and easily. I guarantee that after trying out either of the Session Goods pieces, you’ll likely favor the designer pieces over your go-tos. As I discovered for myself, the label isn’t assigned half-heartedly.

A bong and pipe set in your choice of black or white.

🌿 4/20: Input’s got you covered with goods and gear if you’re just a bit too stoned to doomscroll...