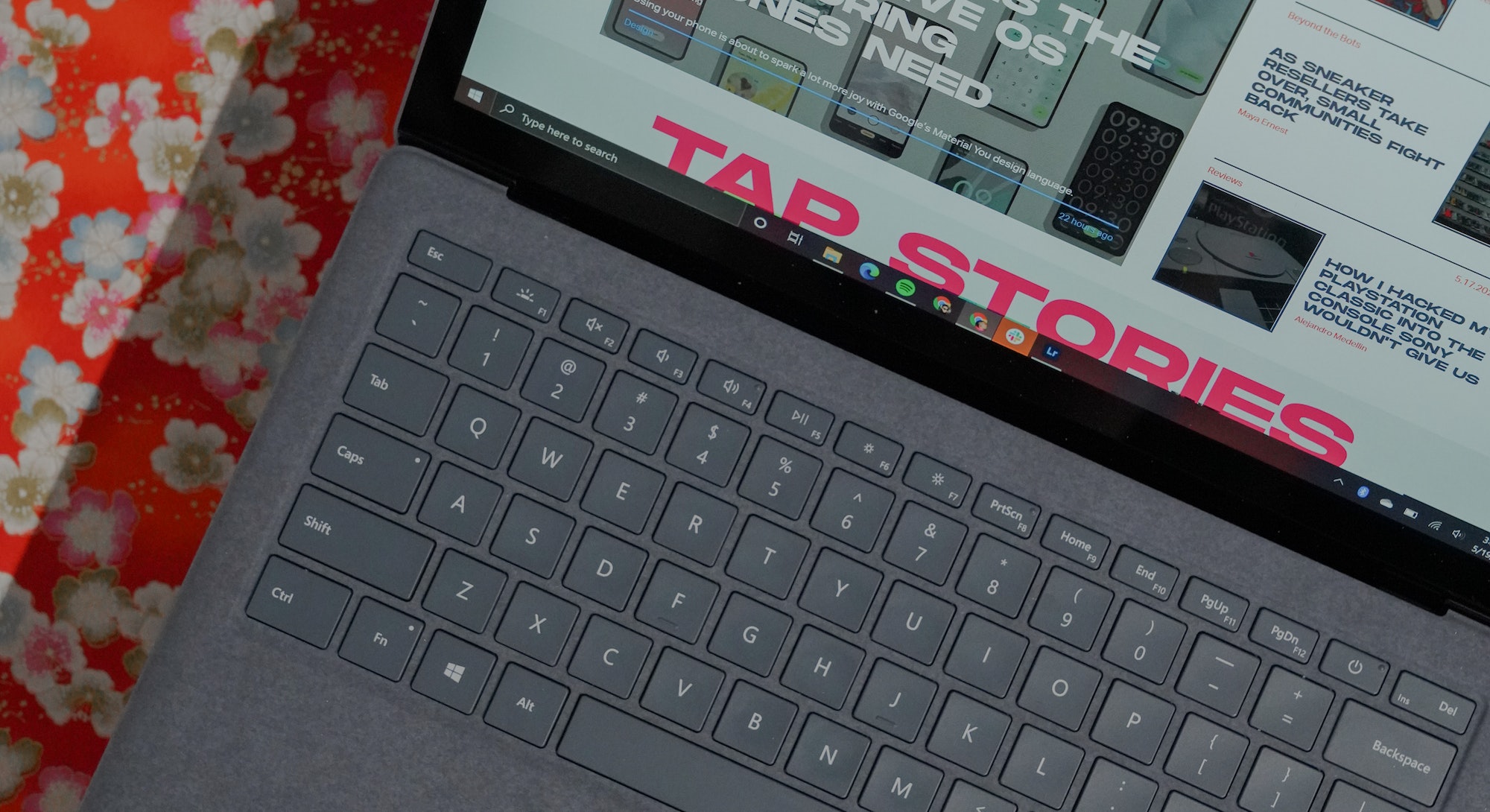 The best thing about the Surface Laptop 4 is that it's not a MacBook.

It has a touchscreen with Surface Pen support, a magnetic port for charging, a USB-C and a USB-A port. I can login just by looking at the screen. It runs Windows 10. There's an M2 SSD that's easily user-replaceable. It has a proper row of function / media keys instead of a Touch Bar. The M1 MacBook Pro has none of these features.

Apple's M1 MacBook Air and MacBook Pro upped the ante with class-leading battery life and performance. The Surface Laptop 4 can't match either spec. Intel performance is good, but not M1 good, and battery life is solid, but not Apple god level.

But even without a chip that rivals the M1, the Surface Laptop 4 is a robust laptop with plenty of features to like. (If none of the ones above jump out, then clearly the Laptop 4 isn’t for you). Like its predecessor, it remains the Windows laptop I recommend to anyone shopping for a new device. (Unless you're gaming on your laptop in which case it goes without saying that you should get something beefier with a discrete GPU).

Microsoft doesn't rock the boat in any way.

As you can see, there's a split between AMD and Intel (11th-gen) processors. Which version do you pick? It comes down to this: AMD is for most people doing basic computing things (web browsing, watching movies, working with documents, and light photo and video editing) and Intel is for that extra power. I know, it's confusing, and I hate that Microsoft has made it harder for consumers to choose. What I can say is that the version I've been testing is very good —again, not M1 MacBook Pro good — but by far still my favorite thin-and-light Windows laptop.

From a design standpoint, the Surface Laptop 4 hasn't changed, unless you count the new Ice Blue color. For four straight generations, Microsoft's stuck with a CNC'd aluminum wedge design. It's still a sturdy clamshell, but four iterations in, it’s looking a little dated, especially the thicker bezels surrounding the bright and high-res 13.5-inch 3:2 PixelSense touchscreen. Do razor-thin bezels really matter at the end of the day? I'll take better CPU and graphics performance or longer battery life over slimmer bezels any day. But if that bothers you, look into an HP Spectre x360 or Dell XPS 13 — they'll have you covered.

Do razor-thin bezels really matter at the end of the day?

The rest of the Surface Laptop 4 is copy and pasted from the Laptop 3, too. It has the same USB-A and USB-C ports. The magnetic Surface Connect port is as useful as ever. And the touchscreen is responsive, as is the Alcantara-covered tactile keyboard and smooth trackpad. No changes to what wasn't broken. If there's any feature Microsoft really should have improved, it's the dinky 720p webcam — it's average and a bump up to 1080p or an upgraded sensor for our Zoom reality would have been appreciated. I'm glad Windows Hello sign-in didn't get replaced by a fingerprint reader like on the Surface Laptop Go; it's way more natural to open the lid and login than reach over to a biometric scanner.

With the same good comes the same bad. There's still no Thunderbolt support — Microsoft’s stance is that it's vulnerable to hacking and not worth the security risk — and there's no SD card slot. The latter is inconvenient for people like me who need to dump a lot of photos and videos from a memory card daily, but the Thunderbolt omission really hurts because my M1 MacBook Air can read and write to external storage way faster.

It's true: Apple's M1 chip is more powerful than Intel's 11th-gen Core i7 chip. Benchmarks aren't everything when it comes to determining if a laptop is any good, but the numbers don't lie. On Geekbench 5, Intel's Core i7 scored an average of 1,485 on single-core and 5,409 on multi-core. My M1 MacBook Air scored higher: 1,670 on single-core and 7,317 on multi-core. These stats speak volumes about the power of the M1 chip. Apple's first-gen M-series CPU humiliates Intel's best laptop chip. It's embarrassing for Intel. The AMD versions of the Surface Laptop 4 are said to have better multi-core performance, but I don't have one to confirm that.

There's more to performance than CPU power. Software optimization matters a lot and so does RAM. My Surface Laptop 4 has 16GB of RAM and runs Windows 10. My M1 MacBook Air has 8GB of "unified" RAM and runs macOS Big Sur. I opened 25 tabs in Chrome on both machines to see which one would give in first and to my surprise (again), the M1 held its own, keeping tabs loaded and ready to go. I already knew that Apple's 8GB of unified RAM in the M1 wasn't a fair comparison (8GB of unified RAM on the M1 is actually more performant than 8GB of RAM on Windows laptops and Intel-based MacBooks); I can only imagine how insufficient 8GB of regular RAM on the base $999 Surface Laptop 4 is.

Where the Surface Laptop 4 has an edge over the M1 MacBook Air is gaming. MacBooks are just not gaming machines. The Intel Xe graphics in the Surface Laptop 4 can't compare to a discrete GPU, but it can do some light native gaming. You can, for example, play Fortnite or Rocket League on medium to high settings without compromising too much on frame rate. Streaming games via a service like Stadia works well, though, since the cloud is doing all the graphics lifting so you can always go that route.

With heavy use (Chrome, Slack, Photoshop, Lightroom, and Final Cut Pro), I can get around 7-8 hours with my M1 MacBook Air; the exact same tasks (with Adobe Premiere Pro in place of Final Cut Pro) got me 2-3 fewer hours for an average of 4-5 hours, which is not enough for a full workday away from the outlet. Lighter use pushes my M1 MacBook Air battery life to 10-12 hours, but again, the Surface Laptop 4 lags behind, usually dying around 8-9 hours. Blame the touchscreen for sipping more power or Windows 10 or Adobe. Whatever the case is, the M1 MacBooks just last longer.

I should also note that the bottom of my Surface Laptop 4 often got very warm under heavy load. The fanless M1 MacBook Air always stays cool.

The Surface Laptop 4 is as safe as laptops get. Microsoft doesn't rock the boat in any way, which is either a good or bad thing depending on what you’re looking for. The Laptop 4’s tentpoles — touchscreen, ports, performance, and battery life — are solid… for a Windows laptop. You can’t go wrong with a reliable machine. And maybe that's enough to satisfy most people, but the M1 MacBook Air and Pro are better 13-inch laptops because their better performance and battery life can't be ignored. These are arguably the two most important features to consider when buying a non-gaming laptop and Apple is in the lead. A similarly specced M1 MacBook Air with 16GB of RAM and 512GB of storage is more affordable, too: $1,450 vs. $1,700.

The Laptop 4’s tentpoles are solid... for a Windows laptop.

That said, if you're okay with taking a hit on performance and battery, you also can't ignore all of the features the Surface Laptop 4 has that the M1 MacBooks don't. Again: the touchscreen with Surface Pen support, a full-sized USB-A port, a Surface Connect port, the Alcantara-covered keyboard, and Windows Hello. There’s utility in all of these features, especially not having to deal with dongles, and they’re valid enough reasons to get a Surface Laptop 4 over an M1 MacBook. Are all of these features worth an extra $250? Not to me. But maybe your needs are different. The Core i5 model with 16GB of RAM and 512GB SSD for $1,500 comes closer to the a similarly specced M1 MacBook Air, but then you’re looking at an even larger performance gap.

So why buy a Surface? The only answer I can come up with is: It’s not a MacBook.

The Surface Laptop 4 doesn't rock the boat in terms of laptop design. It's a safe Windows 10 laptop that's reliable.