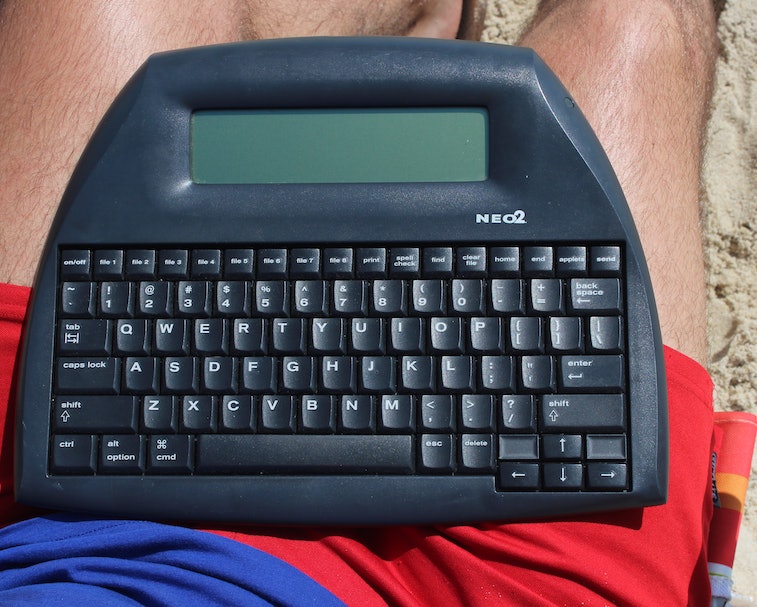 If there’s any one thing I’ve learned about myself during the COVID-19 quarantine, it’s that the internet is both my best friend and my worst enemy. Not that the distractions of the worldwide web are anything new — but being stuck inside all day has compounded the issue for sure. And as someone who uses a laptop for all kinds of writing, I found my productivity has taken a major nosedive.

So I took to Reddit looking for solutions, as any chaotic person would. I tried multiple website-blocking apps; I tried writing on my phone in an attempt to discourage multitasking. None of the software-based solutions worked for me.

Then I found the Alphasmart Neo 2. The chunky black keyboard called to me immediately, with its tiny liquid crystal display and its absolute inability to connect to the internet. I bought one used for about $20 after reading an Amazon review entitled “So perfect may marry it.”

The pinnacle of affordable, distraction-free writing tools. Vintage, retro, and ready to help you pen your next novel.

The Neo line was created by Alphasmart in the early aughts as tool for teaching kids to type — hence its minimalist interface and inexpensive construction. The Neo 2 is the second in that line and has survived since as a cult favorite amongst writers for the same reasons. It’s simple, easy-to-use, and just about as distraction-free as you can get.

The Neo 2 is essentially a no-frills electronic typewriter. Its tiny computer does come built with a few programs, actually, like a dictionary and a calculator. But make no mistake: this is a typing machine. Unlike many laptop keyboards (ahem, Apple), the Neo 2’s is full-sized and springy, with plenty of key travel. Typing it on it is more effortless than on any laptop I’ve ever used — I could type on this thing all day with no issues.

Working on the Neo 2 is a masterclass in simplicity. After loading it up with three AA batteries, all you have to do is open one of the device’s eight files and get typing. Each of those files holds up to 10,000 words, which means you could essentially write a full-length novel without ever clearing out its memory.

The Neo 2 is not a modern device. There’s no way to connect it to the internet; it’s not rechargeable; it’s not exactly beautiful, with its chunky black body and single font option. But in many ways that’s exactly what I’m looking for right now: functionality without the colorful distractions of a computer. I want to write and then write some more and never once feel like I’m missing out on something in another window.

But the Neo 2 is still functional in every way important to me. It comes with built-in dictionary software, which means it can complete spell-checks. It counts my words, making it easy to keep track of project progress. Despite being produced more than a decade ago, the Neo 2 even connects to my MacBook Pro with no problem whatsoever via USB, allowing me to transfer my writing to the computer program I see fit. That process is just as easy as the typing: open up your favorite word processor program and click the Neo 2's "Send" button.

The Freewrite is a distraction-free writing machine with a 5.5" e-paper display and a satisfying mechanical keyboard.

There are, of course, other, more attractive options for distraction-free writing. The Astrohaus Freewrite, for example, is staggeringly pleasing to look at, and its e-ink screen makes reading what you’ve written a much more pleasant experience overall. But the Freewrite, along with other devices in its class, are at the very least hundreds of dollars. There just isn’t room in my budget for that kind of tool right now.

The Neo 2 is so old you can only buy it used. It’s not beautiful, it can basically only do one thing, but it’s still one of the best purchases I’ve made this year, and I’ve never written more.